As one of the most ionic symbols of Palestinian identity, the black and white checkered scarf is worn with great pride and carries a deeper meaningfulness than just a Western fashion trend. The keffiyeh/kuffiyeh or also known as a hatta, is universally recognized and worn amongst Arabs across the globe, however it is especially symbolic to Palestinians and the Palestinian resistance movement.

The History of Kuffiyeh

Historically, the kuffiyeh, were worn by the Falaheen, the farmers, and Bedouins, simply to keep themselves cool in the heat and protect one’s face and neck from the desert sun. The kuffiyeh was worn as part of a traditional lifestyle. Who would have known this black and white, square scarf was to become a powerful symbol of Palestinian nationalism and resistance. The word keffiyeh/kuffiyeh comes from the Iraqi city, Koufa, located near Baghdad. People use to make them out of wool and when cotton was introduced from the east, they started manufacturing them with cotton. There are varieties of kuffiyehs with different checked patterns that are exposed across the world: black, red, green, brown, and solid white.

The Fall of the Ottoman Empire & Rise of Palestinian Nationalism

When Palestine and the rest of Arab and North African region were part of the Ottoman Empire, the traditional red Turkish fez hats were a symbolic icon of identity and nationalism. With the fall of the great Ottoman Empire and World War I in the 20th century, the Sykes-Picot Agreement was implemented across Arab countries and resulted in divisions between populations based on national identity, religion, ethnic groups, social class, etc. People abandoned the Turkish fez hats and some adopted hatless western fashions and others continued to wear the kuffiyeh.

In the 1930’s, the Palestinians revolted against the British Mandate of Palestine and the Zionist militias grew across the region. Palestinians used the kuffiyeh, to help wrap their faces with to hide their identity and or to show support for the resistance movement. 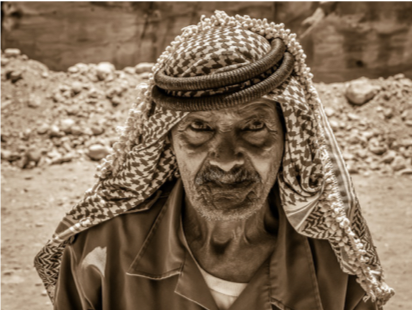 The kuffiyeh is not only a part of the Palestinian culture and history, but something Palestinians symbolically hold onto as a collective resistance to oppressors and colonization. The kuffiyeh and it’s black and white checkered pattern is implemented in many global artists’ work whether its street art, portraits, paintings, murals, T-shirt designs, etc.

Following the Six Day War between Palestine and Israel and its various uprisings throughout the 1980s and 1990s, an increase of European leftists and communities in Latin countries, wore kuffiyehs in solidarity with the Palestinians and the Palestinian resistance movement.

In the 1990s, the kuffiyeh became a trendy fashion accessory in Japan and western countries. Kuffiyehs
were being sold in stores like Urban Outfitters. Worn by celebrities like Rachel Ray and Kanye West. The symbolic scarf gained a lot of attention in the fashion world and grew to become a worldwide
trend. Imported from China, some people are clueless about its political and historical symbolism, and simply wear it because one finds its fashionable. With pressure of pro-Israel lobbyists in the U.S.,
Urban Outfitters was requested to pull the kuffiyeh off their shelves, “due to the sensitive nature of this item.”

People have referred to the kuffiyeh as “a cool accessory or design” to add to their outfits. Some
have referred it as “hipster”, who has been categorized in the process of gentrification in major
cities in the U.S. It is neither a trendy fashionable nor hipster accessory; it has political and cultural
connotation and symbolism to it.

Today, there is only one family run kuffiyeh factory left in Palestine and that is in Hebron, Palestine, and the Herbawi Factory. In recent years, they have struggled to stay open, while many stores buy their kuffiyehs from China at a cheap rate and resell them at much higher rates due to popularity and trends.

Across the globe Palestinians and people in solidarity with Palestinians wear the kuffiyeh around ones neck like a scarf, often times at political events, protests, or casually. Some relate the kuffiyeh to a Che Guevara T-shirt, a symbol of political association and solidarity. Similar to a shirt with Nelson Mandela or Malcolm X, the kuffiyeh is worn to project a political fashion statement, to express solidarity and resistance for the Palestinian cause. 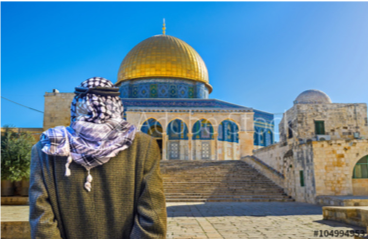 It is not about who is “allowed” to wear a kuffiyeh or how to wear it; it is a reminder that some garments are linked to cultures, politics, and histories and should be acknowledged and respected. The Palestinian kuffiyeh is a tribute to Palestinian lineage, culture, history; a reminder of Palestinian existence and struggle; a symbol of solidarity and justice.