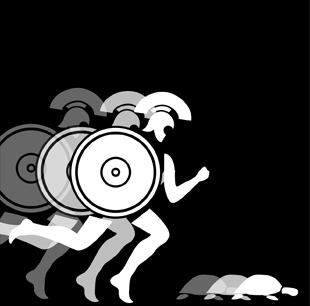 GLOBAL. “Aristotle was born, he worked and he died.” This sentence supposedly originates from one of Martin Heidegger’s lectures. Heidegger wasn’t deploring the early manifestations of human overload; rather, he was driving at what, to him, was important. “Let us turn to Aristotle’s thinking,” was his ensuing request. It is not Aristotle’s CV that counts, nor is it his finely chiseled successes and lifecycles that still make him such a point of reference for so many people today. It is his thinking. That’s what he dedicated time to. And thus originated the lasting.

The early stages of mankind perhaps understood better than we do today, to differentiate between the states of occupation and leisure, to alternatively choose between un-rest and rest. Work has always been a state of un-rest. Un-rest had to subordinate itself to rest, since only while resting can one be at leisure. And here, resting, is where thinking begins.

What during Aristotle’s times was an proper equilibrium has now tipped out of balance. Why, we all know: the world has become bigger and smaller, closer and more distant, more complex and simple in its accessibility. It is these circumstances we must deal with in our lives. And that causes more and more people more and more difficulties. We aren’t trying to set new, different, or even consistent priorities; we aren’t trying to consciously complete the essential and leave the less essential to one side. We try to do finish more and more in less and less time, simultaneously and equally well. We accelerate within the hamster’s wheel, and all the while, don’t even realize that we are no longer advancing. Rather, our life is trapped in an imploding rotation, what the French philosopher Paul Virilio referred to as “racing standstill.”

This is nothing new, merely the reinvention of a historically known problem of mankind, now with different signs. Hans Blumenberg already described this conflict in his work Lifetime and world time (1986) – two dimensions of time, which increasingly fall apart as modernity runs its course. We excessively accelerate our lives to take advantage of everything that can be taken advantage of, since after death comes nothing. Over the course of secularization, we have disposed of the idea that there is a further time, beginning after death and which can heal the lack of time on Earth. So, everything has to happen here and now. Every breath of life is the last chance. Let’s use it, and breathe more quickly!

Consequently, we race around the world in airplanes that fly faster and faster until they explode, as happened with the Concorde in 2000. With it, explodes the idea of limitless acceleration. Out of breath, we check our emails, our Facebook status updates and our appearance in the virtual mirrors of our iPads. Only to find out who wanted what from us when, -or didn’t want anything at all,- and to react immediately, directly and without much thoughtful delay. Until instant communication evaporates into a dull, milky fog of an all-encompassing being online, two million search queries, 100,000 tweets, 48 hours of YouTube videos, 205 million emails and 685,000 Facebook posts stirred together each minute of our jointly accelerated virtual lives.

And so it is with our lives. Under the impression of conquering by accelerating, we believe we can tackle a race with any and everyone. But if we do so, life always retains a head start; it is always a stretch ahead. Because when we believe that we have caught up with the difference in front of us, something new has happened, and everything starts over. Instead of living, we run after life. Everybody tries, like Achilles, to shrink the gap between life and himself, and for himself.

What is most alarming, however, is that to some people, failing at systematic acceleration is not enough. They achieve this also in the reverse direction, in deceleration. Instead of dedicating ourselves to living our own life, we become counter-movement fanatics. Where there is Fast Flow, there must be Slow Food, – and consistently so, please. Where to this day we have flown around the world at supersonic speed, we must now navigate on freight ships for weeks on end, or better yet, meditatively trample step by step on every change of place.

Where otherwise we are trapped in the digital flickering of thousands of emails, tweets and posts, we now download “MacFreedom” on our computers and tell the program, how long we want to enjoy this virtual deceleration: 60 or 480 minutes? Then, nothing else is possible. The data processor shuts down so we can rest, and nothing and no one will bring it back to life until the rest period has elapsed. It’s not making life slower, but making slowness an experience; that is the maxim of the deceleration paradigm of our evermore-scarce time. Slowness and tranquility at the push of a button, even if it involves hiring a helicopter to fly oneself to a secluded island, to decelerate and there, be a slave to the Vita Contemplativa during exactly 24 hours. Our inner ear already senses the rotors that are coming to get us soon. Even while decelerating, we practice the archetypes of efficiency with perfection and discipline. “No breathing time. History is in the making. We are getting there.”

For some people, the moment in life comes when they have to realize: things can’t keep going like this. The possibilities of ascension, be they of life acceleration or deceleration, are limited. Such limits run right through the center of our mind and so too, through the core of our soul. And if we don’t see them and don’t acknowledge them, and just keep trampling on them, over and over, they turn to wounds, to proliferating fissures that at some point can rip us into two. Into the person that we are, and the person that we try so hard to be. Always observing the demands of our accelerated world, and in light of the constant and omnipresent ignorance of our own lifetime, we forget: acceleration is the translation of the all-embracing growth logic into the dimension of time. And deceleration is a mere equivalent, preceded by a negative algebraic sign. But neither leads us to being able to catch up with our life once and for all. Our life remains distant due to the ever-present, logical head start. And we remain trapped in the hamster’s wheel. The time-spears of modernity as a malign combination of time-capitalism and time-Puritanism.

The only possibility to escape from the fanatic perfection of time with positive and negative signs is to rediscover “proper time.” In proper time, we experience time in relation to ourselves. If we stay within our individual gravitational field, our clocks tick slower, time can distend itself – in fact, it has to. We then perhaps aren’t underway at the speed of light, but in the form of time that can light up, be enlightening in the very sense of the word. The insight into the legitimacies of proper time makes it possible for us to break free from the self-indebted time-nonage. And only then do moments arise that can distend themselves and in which, all of a sudden, we are available for real thinking and for experiencing life as a pleasant fate.

Those who don’t understand this for themselves, perhaps have a very last chance. When, at some point of the race, a particularly intelligent tortoise crosses your way, as Douglas R. Hofstadter once described it: the tortoise sits in a Chinese restaurant with Achilles, both of them are done eating, and Achilles immediately rushes to the Chinese fortune cookies. And then tortoise says to Achilles: “Unfortunately you have swallowed a part of your fortune. What’s written on the rest?”

This article originally appeared in German in the Handelsblatt on November 30th, 2012. Translation and images by ROOSTERGNN.