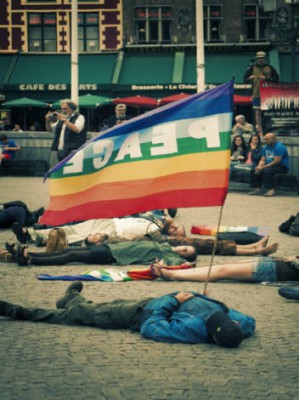 Love is not propaganda

[translations idioma=”ES” url=”http://rgnn.org/2013/10/21/el-amor-no-es-propaganda”]
BELGIUM. Although Spanish society is quite tolerant of homosexuality, new hate crimes against homosexuality are committed throughout the rest of the world every day, a study from the Pew Research Center reports. One particular case is that of the Russian law promoted by President Vladimir Putin at the end of June. This law prohibits the display of “non-traditional sexual relations” to minors and is called “the law against homosexual propaganda.” As expected, the criticism came quickly and even two months later, protests have not stopped. At the beginning of this month, a group of Spanish activists lit a symbolic Olympic flame in Madrid in defense of the rights of homosexual Spanish athletes, who will participate next February in the Winter Games in Sochi.