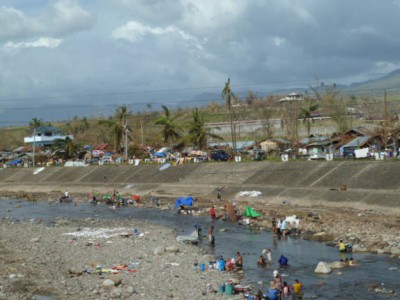 Who Took the Coconut?

PHILIPPINES. A very old German children’s song from the fifties asks, “Wer hat die Kokosnuss geklaut?” – “Who took the coconut?” People of my age in Germany will recognize these folk lyrics. Even my children sang that song in their Kindergarten years. But why do I refer to a song from the 1950’s in an article about my recent trip to the Philippines?

The answer is simple: because the devastating Typhoon Haiyan took away the people’s coconuts! And those coconuts were important to them. Their life was based on those coconuts. They sold them, made products out of them. Milk, candies. From the shells they made souvenirs.

But then, Typhoon Haiyan swept over the island several weeks ago, like a formula one car speeds over a race track. At almost 300 kilometers an hour.

And the people not just lost their houses, their fishing boats, they lost loved ones and they lost their future as well.

It takes years until a palm tree is able to bear fruit again. Everywhere on the islands are fallen-down palm trees. Now they can be used to rebuild houses or boats. The boats the people used before are broken down, stranded somewhere deeper inland. Sometimes miles away from the seashore. The ones that are still close to the water are broken, or they have big holes.

While providing aid as part of my position at Feed the Hungry, I met people that lost literally everything. They showed me what was left over from their houses. I only saw rubbish. I could never guess that there had been a house there before.  They live now under plastic sheets. Walls made out of blankets. They cook outside. Kids are playing in the trash. Schools and kindergartens are not just closed. There are gone.

Thus far, Feed the Hungry was able to distribute about 800,000 meals among the victims. There are more containers on the way. Right before Christmas another container arrived in Cebu. Loaded with another 244,000 Meals.

Until the beginning of the new year, the Feed the Hungry network will provide 3 million meals. With one package, a family can survive about one month. With that package, they can forget to look for food, standing in line for hours. They can use this time to rebuild their homes, fix their boats, plant new palm trees.

But there is a big solidarity among the victims. They help each other. They rebuild their houses one after one. And everybody is helping each other. No one is selfish and wants to have their house up first. It seems to me that the tragedy of the storm put the people closer to each other.

While I was walking trough those washed away villages, I thought about the current Christmas and holiday season. Do we need a Typhoon into our life? A typhoon that would makes us aware that there are other people that need our help? Need our comfort, need something to eat? Those people are everywhere! They are around us not matter where we live.

In the holiday season, so many people put such emphasis on food. Big Christmas Eve dinner. An even bigger Christmas day lunch. Coffee, sweets, cookies and cake in between and after all that … another dinner. Way too much for most of us, and most of the time unhealthy as well.

And all the gatherings we celebrate, we celebrate them with a roof over our heads and a running heating system. Let us think whom we can help, let us share what we have. Let us cut down the Christmas budget and share it with others that not even have budget for anything.

My hope is that it does not need a Typhoon from the sky to make us change our lifestyle. But I wish everybody a Typhoon in the inside to turn around to those that are already looking for my and your help.

Check out the full slideshow of images here.