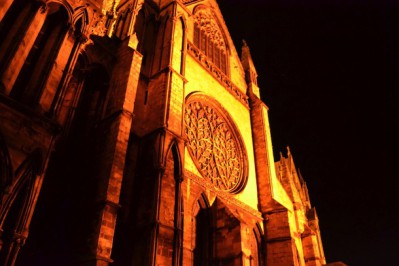 ENGLAND / U.S.A. Abuse of power and mistreatment by governing bodies is not a new phenomenon. In 1215, Magna Carta already sought to counter such corruption of power. Signed by King John and the barons of Medieval England, this charter of political and civil liberties reduced King John’s authority and unopposed jurisdiction. Breaches of power, such as taxation without representation, were thus limited. As such, Magna Carta embodies the values England and many other countries have instituted as foundational principles of their democracies.

2014 marks a very special year for this charter, as one of the four remaining copies of the Lincoln Cathedral Magna Carta will be touring the United States in celebration of its transcendental value. But more than just lauding Magna Carta’s import today, the tour also invites visitors to explore the document’s history.

In 1204, King John lost his riches to France after England lost the Normandy Campaigns. Payments for reliefs and marriages increased as King John sought to find recovery money through taxation. England was a prosperous land with a wealth on wool, providing a suitable and affluent group of people to tax. The barons disapproved this action and sought to preserve their rights.

Magna Carta was their response, a stand-up to a king believed to have been appointed by God. The charter set out to answer the questions of the barons, determining that the king was not superior to the law, but also had to subject to it.

Out of Magna Carta sprouted the concept of democracy, the defining foundation of many countries, including the United States. As Lincoln Cathedral’s Chief Executive Phil Hamlyn Williams explains, “The United States Constitution is based on Magna Carta. It is all about limiting the abuse of power, stating that leaders cannot have untrammelled power. When the United States was gaining independence from Britain, their issue was the British King’s exercised, undue power. They wanted to start afresh. It is Magna Carta that essentially enshrines all of that”.

Magna Carta has maintained its cornerstone-like role in the U.S. In 2011, the Indiana Supreme Court and the U.S. Supreme Court ruled that there is no right for a private citizen to resist an illegal entry by a police officer. Before the decision, however, the Court discussed Magna Carta’s outlined right for a man to his own private property without trespass. Habeas corpus, the Constitution’s Supremacy Clause as well as other freedoms also originate from this document that was written almost 800 years ago.

Still prominent in legislations in effect today, Magna Carta serves as a source of inspiration, change and hope. “Magna Carta can teach people how to regulate their state, and I don’t think that many states have got that right,” said Mr. Williams. “Magna Carta is important to people who are disadvantaged, to people who are left out of the loop, to the generation without jobs. Someone is abusing power somewhere in those situations, and Magna Carta is about addressing that”.

The Lincoln Cathedral Magna Carta will go to Bury St. Edmonds earlier this year before traveling to the United States in June. It will be on display in exhibitions at the Museum of Fine Art in Boston, the Sterling and Francine Clark Institute in Williamstown and finish at the Library of Congress in Washington, D.C. in November.

Four original copies of Magna Carta remain today, a slight number compared to a possible 40 copies that were dispersed around the country after its writ. They are expected to meet and sit alongside one another in an exhibition that will be held at the British Library in London. There is no evidence stating that the four remaining copies have met one another previously, nor that they were written in the same room.