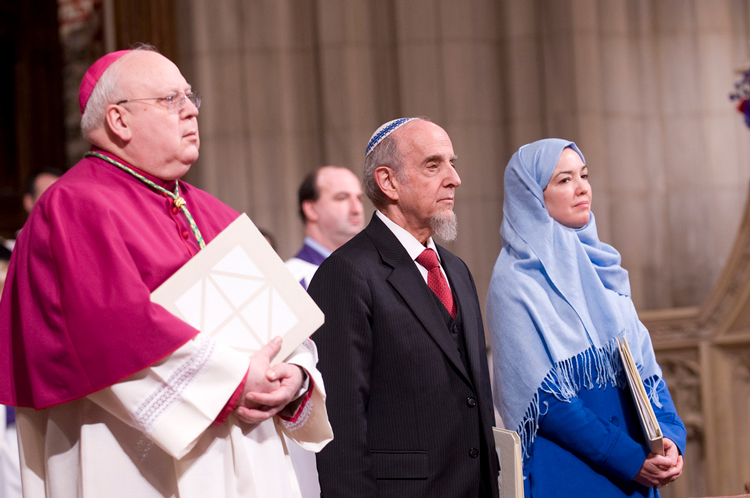 Religious Literacy in the United States

The United States was built on the promise of religious freedom for anyone and everyone. With this came an influx of millions of people from all around the world. In the beginning, it was the rich, long standing traditions of the first Americans. Then came the white Europeans fleeing religious persecution themselves who then persecuted those of different believes. Next were those who were forced into slavery and shipped across the ocean. Finally, the 1930’s came with a major influx of people wanting a better life in America. They came with their different languages, cultures, and especially their religious traditions.

All of these varying waves of arrival have contributed to making the United States, and the Americas more broadly, a widely diverse place where you can find everything from Hindu temples juxtaposed to a traditional Greek orthodox church.

However, the average American is generally unaware of what religious communities exist in their own backyards. I am a glowing testimony to this statement. I grew up in a relatively small town in Central Indiana where 99% of the people were of christian background and of European decent. From my experience in the Indiana school system, world religions are only briefly covered in middle school. Then they are hardly mentioned throughout high school. As a result, I thought the everyone was white and christian. An education in religious literacy would have dismantled this world view that is the case for many Americans today.

What Is Religious Literacy?

According to the AAR Guide For Teaching About Religion, a religiously literate person will be able to analyze the intersections of religion in social, political, and cultural life across the planet and throughout human history. This definition makes literacy sound like one would need to attend years of schooling, but it simply means that one is able to see beyond the surface level learning of basic teachings and holidays. They would learn and understand the history of major world religions, but also regional minority and majority religions, and how all of these complex factors have worked in creating the world in which we live today.

It is easy to dismiss this idea as a way to indoctrinate children into a different religion, but the very essence of religious literacy is taught from an academic, non-bias point of view. The idea would be to create a well rounded understanding of history from outsider and insider perspectives. It also strives to destroy stereotypes and misconceptions about certain religious and ethnic groups.

What Are The Consequences of Religious Illiteracy?

I have always learned that it is easier to hate someone you have never met and know nothing about. Islamophobia is a good example. I see many people that have never meet a Muslim in their life or do not know, even, the very basic teachings of Islam despise them solely based on what they think they know about their religion. I see hate come from people that appear to be some of the nicest people on the planet.

It has historically posed problems all around the world with everything from Nazi Germany to Trump’s 2017 travel band on majority Muslim countries as well as the world baring Syrian refugees.

Colonisation was wildly effective at persecution of indigenous peoples and their religious beliefs. In the United States, it was not until 1978 that the Native American Religious Freedom Act was passed allowing tribes around the country the legal right to practice their traditions. This era of intolerance by the federal government included the boarding school era where children were stolen from their families and forced to adopt western ways of life which included Christianity. Native people were also beaten, arrested, and killed while attempting to practice their religions for hundreds of years.

As a result, peace and coexistence are thus impossible achievements if one would refuse to work with someone of a different faith. Communities cannot be built, nor an affective society that supports freedom and equality of all members can work. The world on which we live is slowly being torn apart by religious intolerance but this just translates into cultural intolerance and then war.

Republican Senator Chuck Grassley of Iowa said this about religious hate crime in 2017 “Fear for practicing one’s religion should never happen in this country. This problem has been growing for some time, and is not new.” In the first part of 2017, the amount of reported anti-Semitic incidents and bomb threats rose a drastic 127% from 2016.

Although the data shows that this is nothing particularly new, it has become evident that this kind of thing is not going to be dealt with in the next coming years. If Obama couldn’t do it, then there’s even a lesser chance that this current administration will have a hand in changing Americans’ mentalities. In my opinion, we would need a major cultural shift in order for hate crimes to drop.

There is no one single way to stop violence in the United States, nor around the world. However, as Americans living in one of most diverse countries on Earth, we should recognize that the current system we have is not working at keeping our diverse populations safe. Finally, as a country that a majority of the world looks to as a model of guidance, we should be doing more for the people from whom we took this land but also the millions of immigrants and millions of immigrant descendents that make up the America we all share today.