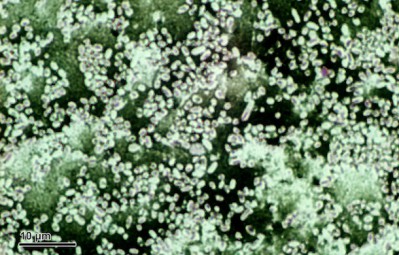 However, often the ink runs, pages are torn or missing, and the sentences are written in a foreign language. Some scientists turn to other books in the series for guidance. As it turns out, there are many stories about depression and anxiety originating in parts of the body besides the brain.

One might think that the body only interacts with the external environment through its skin, the air breathed into its lungs, and the substances it absorbs from food and drinks. However, this view neglects a massive contributor to the body’s environmental interactions: bacteria within the body, most residing in the intestines. The number of bacterial cells within us dwarfs the number of our own cells ten to one. Despite the magnitude of the bacterial neighbors housed by the human body, researchers are just beginning to decode the languages spoken between bacterial and human cells.

Bacteria have a bad reputation, which is not helped by the popularity of antibiotic cleaning supplies and medications. Yet, disease-causing bacteria comprise only a portion of bacterial life. Many bacteria aid in digestion, produce vitamins, and battle harmful bacteria. Disturbing the populations of intestinal bacteria can equally disrupt human physiology and behavior. For example, a third of the people that suffer from inflammatory bowel disease (IBD) and irritable bowel syndrome (IBS) also experience depression and anxiety—double the rates of depression and anxiety in the general population.

To understand the roles bacteria have in gastrointestinal, mood, and anxiety disorders, researchers typically turn to two tools. One of these is the use of germ-free animals, which are born and raised without any internal bacteria. These animals provide researchers with a clean slate to explore how bacterial strains shape physiology and behavior. One study created germ-free versions of an anxious line and a calm line of mice. When the researchers inoculated the germ-free mice from the anxious line with intestinal bacteria from normal mice of the calm line, the would-be anxious mice relaxed, like the calm line. The reverse was also true: germ-free mice from the calm line became anxious after receiving bacteria from the anxious mice. These findings suggest that bacteria may be backstage directors of anxiety behaviors.

The other common tool used to explore bacteria-behavior relationships is the ingestion of single strains of bacteria in yogurt or probiotic supplements. Commonly studied beneficial bacteria include those from the genera Lactobacillus and Bifidobacterium. A number of studies back Lactobacillus strains’ ability to decrease depression and anxiety in rodents and humans. Other studies point to Bifidobacterium strains’ potential in inducing antidepressive and anxiolytic effects on the brain. On the other hand, Campylobacter jejuni increased anxiety behaviors in mice. These results demonstrate the potential for even single strains of bacteria to manage depression and anxiety behaviors.

As the interactions between the body, brain, and the environment are revealed, treatments for one component of the circuit must expand to consider the contributions of the others. Growing knowledge about the relationships between internal bacteria and the bodies they live in brings environmental influence to a more personal level, and calls for a holistically focused restructuring of psychiatry and medicine.

In the future, diagnosing mood and anxiety disorders might include gut bacterial profiling in addition to psychological tests. Whereas probiotic products like yogurts and dietary supplements are currently unregulated and available without a prescription, individually tailored probiotic supplementations may soon serve as effective treatments for depression and anxiety. Balancing individuals’ internal bacteria promises to be a keystone in future mediation of mood and anxiety disorders.