Julia Child and her husband in her kitchen | Hannah Sabroski

The Magic Of Julia Child

The early 20th century had become a time of simplification, trying to make the lives of Americans as simple as possible. The microwave was introduced in 1933. TV dinners made their debut in the 1950’s rapidly becoming a quick alternative to homemade meals; one would simply pop the pre-made frozen food in the oven and in no time dinner would be served with no actual preparation. The early and middle part of the century had also become the era of fast food with many of America’s beloved fast food chains opening their doors between the 1930’s and the 1960’s.

Culture in the United States is, as a result, relatively split on the ways of dinning from the quick and simple ways of the 50’s to everything being made by hand in the home. Luckily, Julia Child brought a perfect mix of quick and simple but elegantly homemade food to American dinner tables in February of 1963 with her first-of-its-kind cooking show The French Chef. At the time, Julia’s show took everything about the seemingly complicated art of French cooking and turned it into gourmet meals you could make on a busy weeknight. She also taught America how to cook again by using complex meals to teach basic cooking skills and concepts.

I admire Julia Child the most because learning to cook with her is honestly like learning to cook with a friend. She’d make jokes and have fun with it. She was known for messing up on while doing the show in one take which even made her more relatable because if she could make a mistake cooking on national television, then anyone could in the solitude of their home. She also translated the entire process into a language that anyone without any professional cooking experience could understand. In other words, she made you proud of accomplishing the simplest of things. 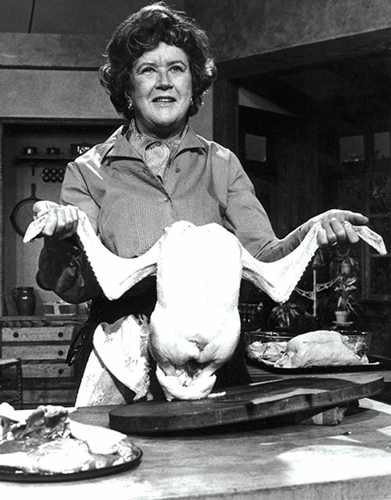 The reason I’m writing this today is that I’ve been personally touched by the magic of Julia Child. I remember stumbling upon one of her videos and ended up binge watching five or six episodes that night; one of the episodes that oddly enough spoke to me was the omelette episode. It seemed to be a simple enough thing to do, making an omelette. However, Julia created something far beyond a mix of eggs and fillings. She crafted a beautifully elegant dish with the flip of her wrist only using three ingredients. For a lack of a better word, I was shook.

I know that it sounds slightly crazy to be so impressed by an omelette being made but the episode was much more than an omelette. The episode was the essence of what Julia Child offered; simplicity wrapped in elegance. After several failed attempts, I succeeded and I honestly felt on top of the world. I felt like I could create anything in the kitchen. The major lesson learned from this was that failing is just part of the battle, it’s not the end of it. Not forming the omelette right or dropping the eggs in too early only aid in the learning process; a lesson intended to be used in the kitchen but naturally applicable everywhere else.

The life and legacy of Julia are wonderfully represented in the film Julie & Julia. All of the work done in order to translate and transform hundreds of French techniques and recipes into something tangible for the American home-cook took the better part of a decade to create one of the first comprehensible guides to French cooking for an American audience, Mastering the Art of French Cooking. Being moved by the amount of effort she put into everything she did from the very beginning of her career is not difficult.

A lot can be taken from such a revolutionary woman in a time where technology and automation of dinning are distancing us from another more and more with cellphones always in our hands and processed and frozen food at our fingertips. Julia’s lessons resonate to encourage people to make their own food, to use fresh ingredients, and create the community around dinning that French culture emphases so heavily; just having friends over for a drink, a snack, or sitting down to a good meal with good company to enjoy their time for a couple hours. She emphasizes that you can take a little extra time to create something beautiful and you can also take a little extra time to enjoy what you’ve created; because Americans are known to eat quickly and leave.

Most importantly, Julia has taught us to have fun and be proud of the things we do, especially cooking. She’s taught us to be proud of everything that we do, even if we make a mistake while doing it. Julia also introduced a simple way to enjoy cooking by making quality food with fresh ingredients that you’d be able to share with your friends and family because there is no better way to create a stronger bond than by breaking bread.