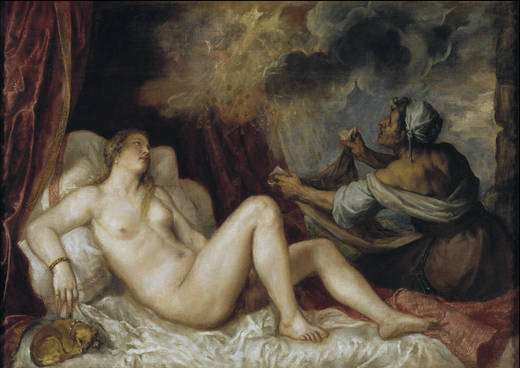 Titian at the Prado: An Interview with Paul Joannides

MADRID, SPAIN. Paul Joannides is the Emeritus Professor of the History of Art at the University of Cambridge. An expert in Italian Renaissance painting, Prof. Joannides will be giving a lecture about Titian at the Prado Museum in Madrid on December 10th, 2014. In an exclusive interview, ROOSTERGNN speaks with Prof. Joannides about his most recent discoveries.

The Museo del Prado wanted to celebrate its 195th anniversary with an important event focused on the Titian: Danae, Venus and Adonis. The early poesie exhibition. You discovered that the Danae painting, one of the main works in the exhibition, though painted by Titian, was not the actual version thought to have been dedicated to King Felipe II.

What initially led you to believe that the Danae painting was not what it was said out to be?

Paul Joannides: The realisation that the Prado Danae could not be the version sent to Philip because it was handled in an ‘all-over’, liquid manner that was not within Titian’s stylistic range c.1550, but which was very close to that of the Abduction of Europa, delivered to Philip in 1562, and the Blindfolding of Cupid, undocumented but universally agreed to me of the mid-1560s. Furthermore, the Prado Danae – which has not been cut down – was conceived – and remains – as a horizontally oriented canvas, and is thus at odds with the other mythologies sent to Philip, which are all more or less square in format, around 180 x 180.

How did the investigative process of this discovery unravel?

The Wellington Danae was the only other painting of the subject with a direct provenance form the Spanish Royal Collection and was known from the published inventories to have had the same format of the other mythologies as late as c.1700 (later, of course, Miguel Falomir found out precisely when the painting was cut down and by whom)… By the simplest process of elimination, the Wellington Danae had to be the version painted for Philip and although it was damaged and much over painted what could be seen of the original handling was entirely compatible with a date of c.1550. Furthermore, Philip is recorded as having had Antonius Mor paint of copy of Titian’s Danae when it arrived in Flanders and although this is lost, a copy of this copy does exist which seems to be by a northern painter (it is also executed on oak, a support much used in Northern Europe), and this shows the portion later cut off from Titian’s canvas. In short, the accumulation of visual – and as far as it was then known – documentary evidence was overwhelming and pointed firmly in one direction: that the Wellington Danae was the painting sent to Philip while the Prado Danae was the painting acquired by Velázquez, probably the painter best qualified to understand it.

Your discovery has shaken the art world on a global level. How did you feel when making such a discovery? What setbacks were you met with?

I’m very surprised to learn that it has ‘shaken the art world’ at any level, let alone a ‘gobal’ one. When I published my hypothesis in 2004, very few people took any notice of it and those who did responded in ways that ranged from a guarded acknowledgement that the idea was of some interest, to patronising dismissal. It was only when Miguel Falomir – who probably knows Titian’s work better than anyone – saw the Wellington Danae and recognised its quality, that the investigation could proceed, for he arranged to have it taken to the Prado where it was examined with modern equipment, and then lovingly restored by Elisa Mora.

You are going to give a lecture in relation to Titian at the Prado museum in Madrid on December 10, 2014. How do you think people are going to react to your lecture? Is there anything you are going to reveal in the lecture that has not been revealed?

I cannot say: since my Spanish is very minimal and insufficient to give a lecture, the audience will have to endure simultaneous translation which always imposes a kind of muffler between speaker and listener; as long as the audience does not walk out en masse I shall be happy. As for content, there will be a few new ideas, ones that have bubbled up since Miguel and I completed our essay, but no new revelations. Probably the most adventurous hypothesis is that Titian may already have planned a mythological cycle of some kind for Alfonso d’Este, Duke of Ferrara, c1530, which was curtailed by the Duke’s death in 1534.

What led you to become interested in Titian’s work? Titian has been called “the sun amidst the stars,” do you agree with this description?

I was drawn to Titian to some extent because I found much of the existing scholarship confusing and – in all honesty – timid and pedestrian and overly obsessed with documentation, which is very patchy, especially for Titian’s early period. But also out of pure pleasure. Having spent many years working on Michelangelo and Raphael, I know that I find the great artists endlessly satisfying and endlessly new; and it is always invigorating to spend time in the company of those whose minds and souls are so much more powerful and elevated than one’s own.

I don’t know whether Titian should be called “the sun amidst the stars,” (an appellation with which I was unfamiliar) but as far as technique is concerned he was certainly one of the most important and influential of all painters, and his work has been a reference for all later ‘painterly’ artists: Rubens, Velázquez, Delacroix etc etc.

In his treatment of a very wide range of subjects and genres he is also a reference-point: he was and is one of the most admired or portraitists, and he is an incomparable painter of the female body. And who can think of a Bacchanal without thinking of the Andrians? Or the Virgin’s Assumption without visualising Titian’s Frari Altarpiece? Or the cruelty of fate without thinking of his Flaying of Marsyas?

You have worked in the Louvre and subsequently transitioned to an academic position at the University of Cambridge. Do you miss the day-to-day museum routine? Could you see yourself returning to a museum again in the near future?

No, I have been an academic art historian for my entire career, working in the Department of History of Art in Cambridge for four decades until my retirement at the end of 2013. My work in the Louvre was initiated during a period of sabbatical leave and was a very happy experience. If I had my career over again, I would have been delighted to work in a great museum, but not a minor one, where political interference is disproportionate and, frequently, inimical. I don’t think any museum curator that I have known enjoys ‘the day-to-day museum routine’: the real joy of museum work lies in engagement with the works of art – and with those colleagues who are committed to the same disinterested pursuit of what it would be dangerous – although tempting – to call truth –but which might at least be called local truths, such as the confirmation that the Danae sent by Titan to Philip II is that in the Wellington Collection…

With all the talk in the news about politics, economy and especially the financial crisis, do you think today’s society gives enough importance to art? Is there anything that we can learn from, say, Renaissance artists, that has been forgotten in the quotidian routine of today’s media?

Large questions like this make me uneasy. All I can say – subjectively and personally – is that, within their different competencies, the arts help us to understand and measure ourselves and one another, that they provide avenues to beauty and joy that we would not have found by ourselves, that they can embody moral principles more immediately and intimately than laws and that they can provide reassurance and consolation in grief. Among many other things. I don’t think that Renaissance artists should necessarily be accorded special reverence, but it would be unwise to ignore a period that produced some of our most powerful artistic reference points.