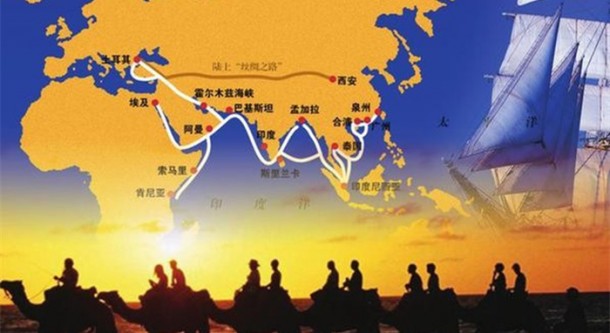 The Chinese “One Belt, One Road” Initiative

During the last decades, China’s social development and economic growth has been not only astonishing but unequaled by any other developing country, let alone the so called advanced economies. However, in order to maintain its growth in the long run, China needs to shift its economic model based on investment and low-cost manufacturing output into one more services sector, added-value output and consumption oriented. Not only that, China needs to truly open its society and economy to the outside world and, at the same time, needs to go global to let the world better understand China.

In this respect, the “One Belt, One Road” initiative is a clever and ambitious strategy. It is a real international geostrategy and global geopolitics blueprint aimed at facing the American plan consisting, on one hand, at locking China in the Pacific and, on the other hand, to spread Islamic terrorism in Central Asia to destabilize its western borders and prevent an unbearable strategic close alliance with Russia. In this article we analyze the “One Belt, One Road” initiative and the dangers and challenges that it will face coming from United States and its regional allies.

In order to keep developing its economy, China needs to go global. Others nations through history had made it by means of being aggressive and through conquest, whereas China, in accordance with its history, it is committed to do it in a peaceful way.

The “One Belt, One Road” initiative is a strategy aimed at concluding partnerships with China’s neighbors and any other nation interested in developing itself and doing so in cooperation with China. It is an open and comprehensive initiative which seeks partnerships based on mutual interest and not alliance and submission to a boss (USA), as it is the case with the Trans-Pacific Partnership (TPP), which is primarily aimed at isolating China in the Pacific region.

It consists in two main components: the land-based “Silk Road Economic Belt” and the “Maritime Silk Road”. The first one is the 21st century version of the ancient Silk Road departing from Chang’an (today’s Xi’an) and crossing all Central Asia into Western Europe.

This Economic Belt has the twofold objective of stimulating the industrial and economic framework in the Far West of China, linking that region to Central Asia and Russia to attract foreign investment and hence increase the economic output and raise the standard of living of Western China.

China wants to shift its industrial paradigm, giving more weight to consumption and the tertiary sector of the economy. In other words, China wants to stop being regarded as the world’s factory and start producing high value-added products and services. The world’s factory has its center in the eastern coastal provinces, a fact that has caused the central and western regions of China to remain far behind the rest of the country in terms of development and economic growth.

To maintain social, ethnic and national cohesion throughout China, Beijing needs to allow sustained economic growth in provinces such as Tibet, Xinjiang, Qinghai and Gansu. China plans to let its Far West become China’s domestic factory, whereas the coastal provinces shift to the service sector.

THE “ONE BELT” FACES CHALLENGES

The Economic Belt fits perfectly in this picture, but that is not to say the project is exempt of challenges. In fact, there is one major concern for Chinese authorities: increasing destabilization in Central Asia and in Xinjiang province due to the raise of Jihadism and religious extremism. And if somebody thinks that the raise of this phenomenon is random, then you have another thing coming.

Chinese authorities reckon the existence of Xinjiang’s Uyghur combatants in the ranks of the so called Islamic State in Syria and Iraq. It also reckons that as much as one hundred of them have returned from the Middle East and have committed terrorist attacks in Xinjiang province. But the same situation repeats itself in Uzbekistan (Fergana Valley), Kyrgyzstan and the rest of Central Asia countries including the southern republics of Russia.

Af-Pak region is a source of destabilization too. One of the appendixes of the Economic Belt is already in function, the China-Pakistan Economic Corridor finishing at Gwadar port. Because of security concerns, Pakistan’s government has promised the deployment of twenty thousand troops to protect the corridor. And Gwadar port is very near Pakistan’s Baluchistan province, a place with more than one terrorist and rebel group fighting against Islamabad and even the Iranian government.

As we can see, religious extremism and Jihadism is spreading throughout the very same region where the Economic Belt has to be developed. Having in account that religious extremism and Islamist terrorism are being fueled by America’s imperialism and funded by Saudi Arabia’s money, they are undoubtedly a real challenge to the Chinese “One Belt, One Road” project. United States and its allies spread violence and destabilization where China wants to promote peace and create prosperity.

THE “ONE ROAD” FACES ITS CHALLENGES TOO

The 21st-century Maritime Silk Road is the contemporary version of the maritime route taken by Admiral Zheng He’s fleet six hundred years ago. It is an initiative aimed at promoting investment and cooperation in Southeast Asia, the Indian Ocean and East Africa, recreating the route once used by Admiral Zheng He to reach East Africa.

There is a caveat, however. That ancient route past through the strategic Strait of Malacca, which nowadays is controlled by USA and its allies. To avoid that bottleneck, China has come with the idea of constructing the Kra Canal in Thailand. Curiously enough, the south of Thailand is predominantly Muslim and since recent years religious extremism and separatism are arising in that region too, just south where the Canal will be constructed. And let’s not forget the Karen rebellion in in Myanmar (Burma), northwest to the location of the would-be Thai canal.

Yet another issue that could further disrupt the development of the “One Road” is the Trans-Pacific Partnership (TPP), a regional project promoted and directed by Washington from which China has been excluded, making more difficult cooperation and understanding between regional countries and China.

China’s “One Belt, One Road” initiative/project/strategy is a game changer scheme that has not only the potential but also has been originally conceived to bring peace and prosperity to all the countries that agrees to participate in it. Hence the counter scheme advanced by Washington to destabilize Central Asia and the Pacific region by the very means explained above.

Personally speaking, I think all the countries should adhere to this project and take benefit from it. I think that it is also important to research the potentialities of this mega project and the potential threats that it surely will face too.

My translation background has taught me to become a bridge between different cultures, to research the differences between them in order to eventually surpass them. Terrorism in Central Asia and maritime quarrels in the China Seas are threats to a project that is inclusive and searches prosperity for all the parties involved. Therefore we have to be vigilant and study the causes that are at the core of these issues instrumentalized by Washington in order to advance its destabilization agenda against China.