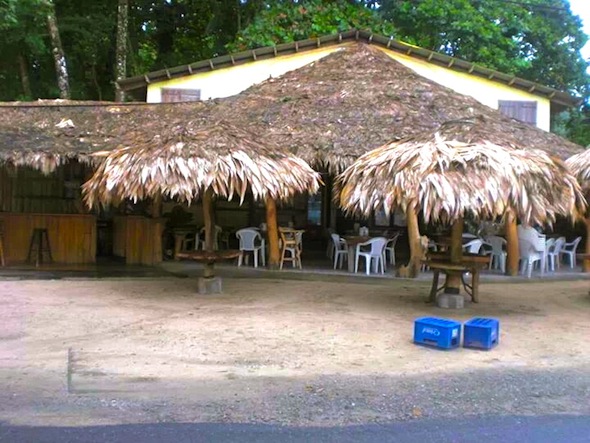 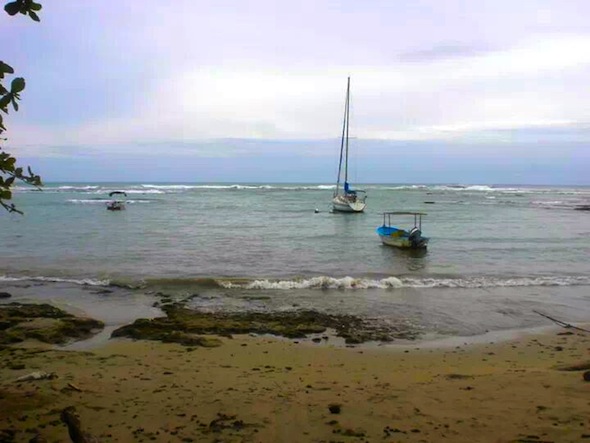 Before going, we had heard a lot about the culture and the people there. We had heard the population was predominantly of African descent, which was a part of the reason we had wanted to go: to see how life was different there than in the capital of San José. Also, we had heard that the year prior to us going there had been some issues with safety in this area. Apparently some students were robbed, but since then there has been more security and patrol in this area.

Since we were living in San Jose, we had to buy bus tickets to get to Puerto Viejo. Round trip tickets were 6000 Colones (12 USD) and the ride to Puerto Viejo was about 6 hours. The bus was full, but everyone had a seat and halfway through the trip we stopped at a rest area for about 30 minutes where there were restrooms and food stands.

Our next stop: Puerto Viejo. After we arrived at the bust stop, we walked to the Coconut Grove Hostel, located on the main street, about a 3 minute walk away from all the action, which is great since it does give you some peace and quiet. The cost was 7500 Colones (15 USD) per night. The Coconut Grove Hostel was such a nice and charming place. The lower level is open to the outside where there was a bar area, as well as tables and a lounging area to relax. There were also books that you could read if you just want to relax. The floor we were on had three rooms, each with two twin beds, a desk with two chairs and a closet. The rooms had hardwood floors. There was also a big window in each room as well as a ceiling fan to circulate the air since it does get humid. The bathroom on each floor is public, but it was kept clean!

Across the street from the hostel, the beach spreads out against the backdrop of the mountains and the beautiful scenery Costa Rica has to offer. The beach has restaurants and little stands set up where you can buy souvenirs. A lot of the souvenir stands sell shirts, hats, towels, sarongs, key chains, and even handmade items such as wallets and coin purses. I bought a really pretty sarong from one of places there for about 3500 Colones (7 USD). There are also clothing stores in this area, as well as places to buy groceries. Puerto Viejo has two banks, a Costa Rica Bank and a National Bank. The banks are open from 6 a.m. to 10 p.m. An ATM is located on Avenida 71, which was about a 10 minute walk from the hostel (Look here for more information about the banks in Puerto Viejo). 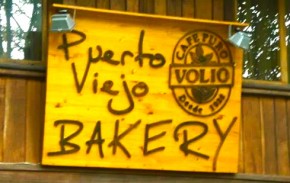 There are more than 25 restaurants and bars located here. One eating place right next to the hostel is the Puerto Viejo Bakery, where they have plenty of baked goods such as cakes, and cookies as well as typical Costa Rican food, sandwiches, and Caribbean food. They have great smoothies that are about 1500 colones (3 USD). We ate at this place for breakfast where I ordered huevos rancheros that was really tasty; it came with the eggs, toast, and rice and beans all for 3000 colones (6 USD). I also had a delicious piece of chocolate cake, which cost 1500 Colones (3 USD). All of the food in this area is around this price; of course, how much you spend depends on what you order.

At nighttime, you can still walk around on the beach and enjoy the view. For dinner, the restaurants all have music playing; some even have live music such as The Lazy Mon at Stanford’s which is a Sports and music bar. They are located right on the beach as there is outdoor seating. The night we went, they had a live band playing, the weather was nice and there were a lot of people, which made the atmosphere really fun and festive. This bar also has a pool table, foosball table, and ping pong/beer pong table for its patrons. The drink specials they had were really good: two for one. While there, we sat and chatted while listening to the live band. We finally left at 10 PM when they closed.

A couple hours before we left Puerto Viejo, we found this art gallery called LuluBerlu Art Gallery. It was about a 10-minute walk from the Hostel we were staying at. This art gallery had some amazing pieces. They had paintings from Costa Rican Artists; they had jewelry, jewelry boxes, clothing, mirrors, and plenty of other neat things. I would encourage anyone who has time to go by and take a look. Their hours are from 9AM-9PM and they are located off of the main road in Puerto Viejo: 100 meters south of the renowned Café Viejo.

1) SAFETY: Before we went to Puerto Viejo, there was a lot of talk about how dangerous it was. Puerto Viejo, just like any other place in the world, and can be dangerous if you are unaware of your surroundings. If you go, be sure to walk with others, pay attention to the area, and don’t flash a lot of money or wear anything that would give off the idea that you have a lot of money with you. The environment there is really laid back, so wearing shorts and a t-shirt or something casual would be ideal.

2) LENGTH OF STAY: Puerto Viejo is a nice place to go and experience, but it is not somewhere you would necessarily stay for a week. I think going for a day or even two would be more than enough time since there is not an overabundance of activities to do. 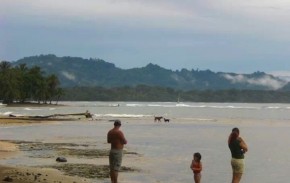 Marked by its natural beauty, Puerto Viejo offers relaxing walks along the beach almost any time of year

3) PASSPORT: Carry at least a copy passport with you. After leaving Puerto Viejo, on the way back to San Jose, the buses were stopped by the local police to check Identification cards. They were checking for passports. While in Costa Rica I ALWAYS carried a COPY of my passport with me; I didn’t carry the real thing around in case I lost it. The copy of my passport was sufficient enough for everything. The interesting thing though is that even though the police stopped the bus to check identification, the people that did not have their cards did not get in trouble. Still, I would recommend carrying a copy of it everywhere, just in case some of the officers aren’t as understanding.

4) WEATHER: Puerto Viejo is pretty humid, so be prepared for that. However, while Puerto Viejo does get plenty of rain, it still has a lower annual rainfall than other Costa Rica cities. In Puerto Viejo, hurricane season begins in June and ends in November, so keep this in mind when traveling there. Although we traveled at the beginning of hurricane season (in June), the weather was calm and nice; it never even rained Also, the average temperature in Puerto Viejo is a high of 80 and a low of 70. For more information on the weather, click here.