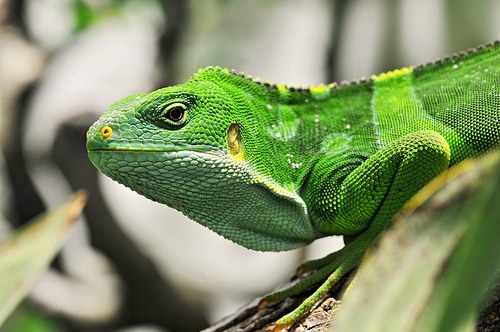 Appreciating the Local Faunae: the Iguanas of Yucatan

MEXICO. The green iguana (iguana iguana) is a federally protected species in Mexico. Outrageous fines are levied against anyone who endeavors to move or disturb an iguana. The casual observer might be tempted to conclude that the iguanas know this.

My trip to the Yucatan peninsula in southern Mexico brought me into intimate contact with these formidable creatures. They gather in great numbers in public spaces. Signs are posted everywhere warning tourist and local alike of the penalties associated with disturbing the iguanas, which, for their part, are as unafraid of humans as if they could read the signs themselves. It is not at all unusual to find one occupying a choice patch of sunlight in between tables at an outdoor café, munching happily on dropped leftovers. Their lithe green bodies can be seen sunning themselves on top of centuries-old Mayan ruins that humans are forbidden to touch. A public waste bin might contain a craggy old grandpappy, his limbs lumpy with scars from innumerable fights, his beady black eyes warning you away from his rightfully stolen garbage.

Coming, as I do, from the Midwestern United States, which contains no lizards to speak of, I found myself captivated by these large, imposing reptiles which manage to look simultaneously savage and regal. I could scarcely control my laughter when I saw entire crowds part to accommodate a single iguana parked squarely in the middle of a foot path to sun itself. After I’d gotten over the shock of seeing cat-sized mini-dinosaurs lounging on park benches, I cultivated a heartfelt appreciation for their insouciance, their, the way they would fix an approaching human with a firm yet laconic gaze, like an old man on a porch making sure the neighbor kids don’t get too close to his flower patch.

The great thing about traveling is that it’s not the same experience for everybody. You travel to experience, for the purposes of diversion and recreation, what other people see and experience every day. You travel to see a different kind of “normal”. And because what you consider normal is largely constructed by your personal tastes and biases, these differing varieties of “normal” are correspondingly different in everybody.You’ll never know what about a new place will stick in someone’s mind. Those with an eye for architecture might remember New Orleans by the sumptuous French colonial balconies and trellises. Someone sensitive to the weather may characterize London by the oppressive rain and fog. For a committed gastronome, a single transcendent cup of espresso can encapsulate all of Italy.

I am a lifelong animal lover, and as such my travel memories always seem to gravitate toward the local faunae. Animals, no less than people, typify a region (even in urban areas – the world’s highest concentrations of nonhuman animal life are all found in cities). For me, the defining feature of Alpine Switzerland is the swarm of black slugs that swarm over lawns, gardens, and public fountains every summer (where I live, we have a smattering of snails, but no slugs). My family’s ranch in central Nebraska is defined in no small part by the whooping cranes that darken the sky for a few weeks a year. And for all my memories of Mexico, its beaches, its cuisine, its jungle, its native and colonial history, its vibrant street culture: all of it can be encapsulated by mental image of a large, ugly, implacable green lizard, staring at me while I pass it on the footpath to the beach.