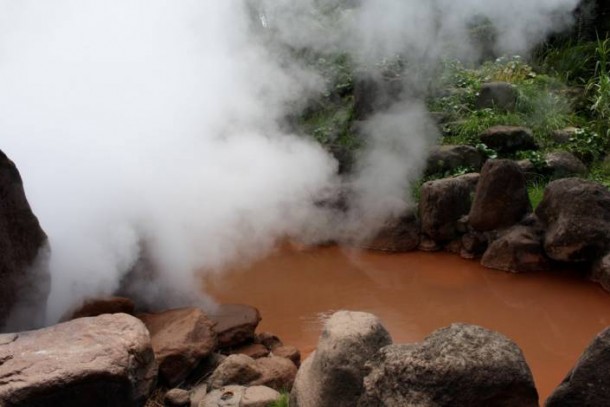 JAPAN. Hell as described by Dante and William Blake seems neither beautiful nor welcoming. However, the vision conjured by these poets is tremendously convincing. Then we tend to wonder is hell always — a mere gruesome image of beings roasted and welted, or is there something beyond that too? Well, if you visit Beppu you may be confronted with some brand new discoveries. Hells of myriad colours. Well, nine to be precise!

Beppu, the hot-springs capital of Japan. Located in the central part of Oita Prefecture of Kyushu Island. On the east the Beppu Bay faces Setu inland sea, while its western arm stormily embraces two active volcanoes, Mt. Tsurumi and Mt. Yufu. Beppu has famously been ranked first in gush volumes of hot-spring in Japan with a ridiculous number of 2,900 springs venting heated amounts of chemical properties that serve in curing skin ailments to enhancing natural beauty.

Due to its extreme temperatures and unique chemical properties, nine of these geothermal hot-spots have been defined as “Hells of Beppu” also known as Jigoku in Japanese.

With each of these nine unique hells comes a theme, beginning with Umi Jigoku (Sea Hell), with gushes of cobalt-blue water boiling at temperatures fierce enough to boil baskets of eggs in minutes. While Chinoike Jigoku (Blood Pond Hell) is not only terrifying by name but its mere sight can take your breathe away literally.

The blood waters are rich in red clay with a feature of Kamado Jigoku (Oven Hell) offering a grand statue of red demon inexplicably stradding a cooking pot!

Finally, the one that beats all — Oniyama Jigoku (Devil’s Mountain Hell) which gets its name from boiling mud, the bubbles of which are said to resembling shaven heads and steam strong enough to pull a train coach, and which also indisputably is home to numerous crocodiles and alligators jostling ferociously with each other. Even though no demons here to catch our bare eyes, a minor slip of foot could bring one to brisk and animated destruction.

This classic sightseeing of Beppu can be easily accessed through tourism agencies which come with a chance to purchase ‘hell-boiled eggs’ and witness Utamaro Gallery right across the street – brazenly dedicated to sex?!

Although the gallery features gracious artwork by the artist, Utamaro. it is jolting for unimaginative tourists when asked to buy Utamaro’s famous woodblock prints, which changes hues with a splash of water – undressing a woman in kimono and vice-versa.

Well, personally I chose to evade this one and hit the road early morning to a yet another “gusher” resort town near Beppu called, Yufuin, kneeling at the foot of Mt. Yufu.

Even though the ancient Buddhist scriptures identify jigoku as an image of “burning hell” in Japanese and conform to capitulating hellish dramatizations created by Dante’s ‘Inferno,’ this visit of ‘hell’ will not only demystify some of those conjectures but also create hope for hell-seekers!