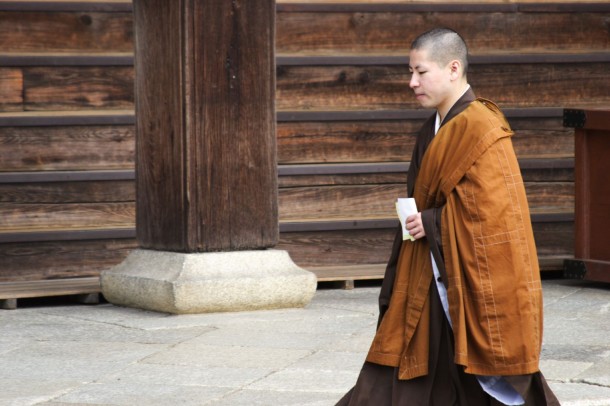 Buddhism preaches love and being in touch with your spiritual self more than anything. Besides being cognizant of and able to differentiate between the material and spiritual world, connecting with the self and balancing energies within and without are key. And there is no reason as to why sexual energies should be excluded. A balance of yin and yang, sun and moon, light and dark, does not equate to male and female. Granted, there are more correlations and characteristics associated with a particular gender but this does not in any way indicate a causal relationship between gender and sexual orientation.

“We mustn’t act as if it’s all right to cast the LGBT community aside because they’re a minority group.”

“I am not gay myself, and there were no LGBT people around me when I was growing up. The old me was prejudiced against sexual minorities.”

According to Huffington post, Kawakami recounted, “One day I was having tea with a friend, and a person walked past who you could tell at a glance was gay. I made a discriminatory comment. My friend replied, ‘I’m gay, too. Is that the way you feel about me, Taka?’”

“When he said that, I remembered being discriminated against as an Asian person when I traveled in the South. Especially because I had been the victim of prejudice myself, I felt terrible shame, and I completely changed my position. As I changed, my friends began to open up to me about the fact that they were gay or lesbian.”

American educated, Kawakami started giving American acquaintance zazen meditation classes in English, and word got about from there. The first person to ask about same-sex wedding ceremonies was a woman from Spain who had visited Shunkoin many times to learn about zazen meditation.

“‘Can you hold wedding ceremonies here?’ she asked me,” Kawakami recalled. “I told her, ‘Yes, we can.’ Then she said, ‘I have one more question. My partner is a woman.’ And I responded, ‘That’s fine.'”

After examining the sacred texts of Mahayana Buddhism, Kawakami confirmed that same sex weddings would not contradict scripture. While expecting criticism, he believed that his actions in holding same-sex weddings would encourage open-mindedness amongst the Japanese toward sexuality and sexual orientations.

“The reasons why LGBT people are not accepted are different in the West than in Japan. In Japan, there is no religious pressure from groups like Christian conservatives. So you don’t see the same sort of strong opposition as in the West. On the other hand, in Japan, there is an underlying pressure to conform, a sense of ‘We are all the same; we are all heterosexual’ — and that makes it hard to live as an LGBT person.”

The collectivist society of Japan, where one is a sore thumb for sticking out, is not conducive for people to be accepted for their uniqueness.

“I thought that if places such as my temple could show that we actively accept same-sex marriage, it would draw more attention to the problem,” he added.

In 2010, a Spanish couple held a public wedding ceremony at the Shunkoin temple in Kyoto. With the increasing acceptance of same sex couples like the recent official certificates issued in Shibuya and Setagaya wards in Tokyo, the future seems to be bright and gay for Japan.