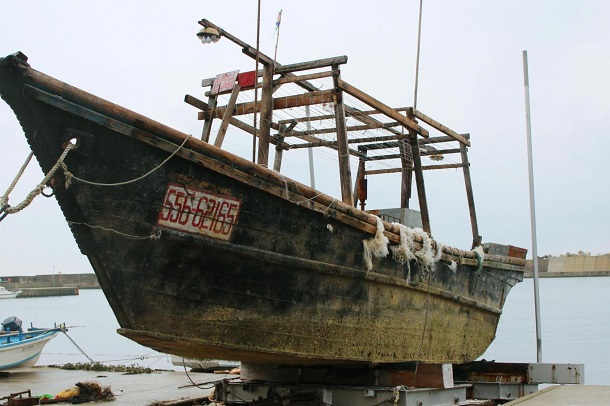 Mysterious Ghost Ships Keep On Washing Up on Japanese Coasts

Ghosts ships filled with dead bodies keep on washing up on Japanese coasts. The last one was found only two days ago on Sunday December 5 and it contained four corpses in an advanced state of decomposing, suggesting that the boat had been adrift for a long time. The 12.5 meter-long vessel was recovered 6 miles off the north coast of Japan’s main Honshu Island near the Ushitaki fishing port in the Sai Village.

But this is not an isolated incident: over the course of the past two months, 12 similar boats containing at least 25 bodies have been found drifting in Japan´s exclusive economic zone. Although Western media has barely covered these episodes, the phenomenon has apparently been going on for years. In 2011, 57 ships were found, in 2012, it was 47, and in 2013, 80. In 2014, 65 boats were discovered and this year the number was 35 so far. This means that over the course of the past five years, a whopping 284 ghost ships, containing an undisclosed number of bodies, have washed up on Japanese shores. 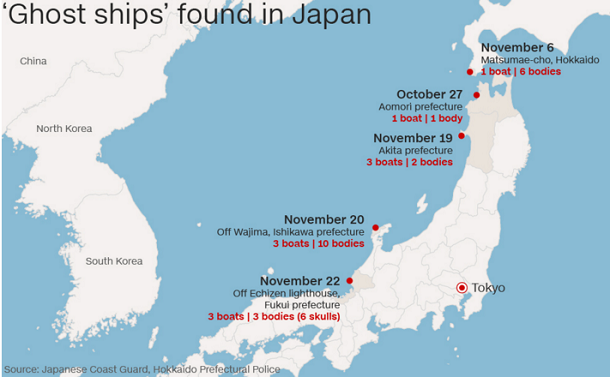 The boats all look similar, they are usually made out of wood and powered by antiquated engines. Authorities investigating the mystery have found fishing equipment on some boats, as well as a scrap of cloth resembling a North Korean flag on one ship and an inscription in Korean reading “Korean People´s Army” on another. All clues suggest that the boats are coming from the North Korean territory, but the identity and purpose of the vessels stay unclear.

Japanese police officials believe that there might be three explanations for this phenomenon. At least one part of the bodies could have belonged to defectors trying to escape over the East Sea route, since the policing of the boarders with China and Russia has made it almost impossible to depart the country by land. In fact, in September 2011, a family of nine was rescued off the coast of northern Japan after they had been travelling for five days on a small boat, trying to seek asylum in South Korea.

However, certain objects found on the vessels including fishing nets, hooks, and other tools, suggest that most of them could be fishermen´s boats that were pushed too far into the sea and couldn’t resist the strong currents. Robert Dujarric, director of the Institute of Contemporary Asian Studies at Temple University, told the South China Morning Post that:

We know that the regime in North Korea is pushing its farmers and fishermen to produce greater amounts of food and, to my mind, the most likely explanation is that these were simply fishermen who were trying to fulfil large quotas and simply ran out of fuel too far out at sea to get home.

Another possibility is that the desperate conditions that large parts of the North Korean populations are living in, could be pushing fishermen to voluntarily take risks and go too far off the coasts in order to feed their families. Some of the corpses show signs of starvation, indicating either that the fishermen could have been alive for days while the boats were drifting in the sea or that the shipwrecks might be indeed brought about by their attempt to take matters into their own hands.

But whether motivated by misery or by the unrealistic demands of Kim Jong Un´s regime, the victims´ willingness to put themselves in danger might be a testament to the conditions of hardship and oppression that the country has been experiencing. One thing is clear: more and more ships will continue to wash up on the Japanese northern coasts and there is very little that the international community can do to avoid this tragedy.