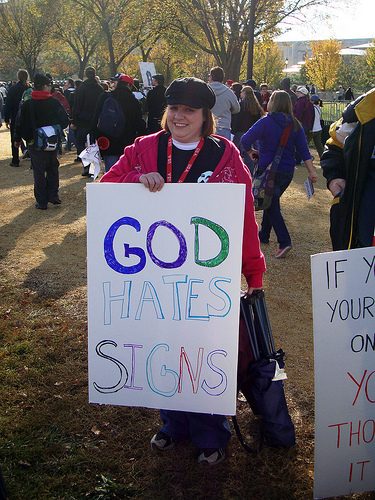 The Yes Men Who Say No To Corporations

Andy Bichlbaum and Mike Bonanno are two guys who couldn’t hold down a job until they became representatives of Exxon, corporations, WTO and the U.S. federal government. That happened occasionally and very shortly, as those institutions have never heard of them. And they would had preferred to go on the same way, as the activist duo main rebellion tecnique consists of emboding spokesmen of existent or not existent companies and have them proudly annouce nonsensical commitments (such as the deportation of the statue of Liberty by the alleged group Legals for the Preservation of American Culture or castrating the Wall Street bull, and maybe, bullies too, by the Brokers and Policemen for the occupation of Wall Street group).

One of their most notorious actions dates back to 1999, when Mike and Andy set up a parody of the WTO website. Some people mistook it for the real thing and eventually the two guys were invited to conferences to speak as the organization they opposed, and their absurd proposal were quoted and spread by the biggest new outlets.That was the “perfect match” as the convergence of both traditional media and new ones gave them the maximum visibility. The basis tenet of their credo is indeed “fight the system by its own means”. And as capitalism, corporation and government are reducing the space for democratic debate, by taking control over media, the media tehmselves has to be used to counterweight their influence. “Television was born as a democratic medium, but because of subsequent corporate use, it has been hijacked from its original intentions”, explains scholar Lani Boyd in his analysis of “the Jonathan Swift of the Jackass generation”, as they were defined by author Naomi Klein.

It now applies to the web too. Therefore, a big part of the Yes Man job is setting up spoof websites such as the one in the name of one polluting firm, boosting colorful inhalers to kids, so that to make childhood asthma “cool”. Recently they have set another one, Skip showers for beef, though which visitors were invited to skip shower in order to save water in order to have more beef. The goal is exposing the lectures by vegetarian who blame the meat industry (and therefore meatlovers) for its large water requirements).

In order to gain more supporters and to raise new generations of activists, the Yes Man have set an online Action board, with they define as a “match.com for social change”, Moreover, they are holding Critical Tactic Labs in NYC to teach the how to gain visibility and they have also shot three movies about their (mis)deeds. “When people ask us whether what we’re doing makes a difference, or ask what we accomplish, we say that mainly, we see our work as a contributing to a cumulative movement that does effect change” they claim on their website.

Raising awariness about what they do, broadening their base and audience is essential to their goals and, possibly, to change the world. Nevertheless, in spite of their call for action and openness about their targets and actions, about their biographies the Yes Man are oddily silent. Andy Bichlbaum was a former games developer who was fired because he had done something funny, he swears, obviously relying too much on his employer sense of humour. No one knows whether the duo has struggled to get a real job, but pretending actually working for a big company. It’s hard, though, to blame any employer not expecting much reliability from the guys who made a fool of WTO and Exxon: Andy and Mike, Mike and Andy. By the way, these are not their true names.