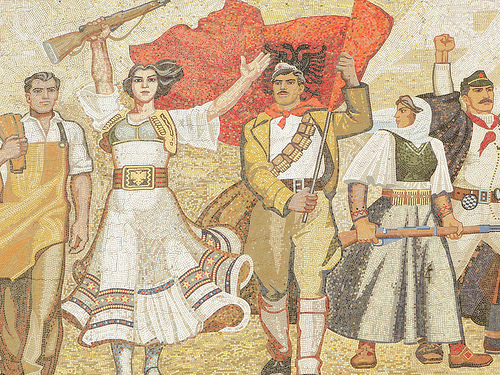 Have you ever thought of traveling without leaving too? I did it, I was thinking of making a trip in the summer, and without thinking of distant goals, I decided to go to Albania. Do you think its coast, bathed both the Adriatic Sea that by the Ionian Sea, about seventy kilometers away from Puglia. A wonderful opportunity to discover this country still not visited by hundreds of tourists and to find its side most authentic.

From Brindisi, with one of the many ferries that daily commute, you can arrive in Vlore (Vlore) where I stayed for a day. Here I found a city very simple and quite poor. It’s the second largest port in the nation, after Durres (Durres), and the only source of livelihood, which in recent years has given a boost, is tourism, promoted by the beauty of the beaches. Some of the most beautiful are those located between the Llogaraja Pass and Saranda. And, in fact, during my stay I enjoyed the sea and the sunny climate that has accompanied me during my exploratory walks. Do not miss is the most good kebab I’ve ever eaten in a rotisserie in Boulevardi Kryesor.

The tour continued towards Durres, I have achieved thanks to one of the many buses that will head daily starting from Vlora. The transport sector is very efficient and really cheap, it costs only 30 lek. Are buses nearly every street corner and they stop to pick up or drop people practically in the midst of them. In fact at the expense of those who told us that no machine would not come from anywhere, thanks to the many buses and minibuses I moved everywhere.

Durres is the second city in size and importance after Tirana, thanks to its port, for years based massive emigration that saw in the nineties thousands of Albanians to leave their country for Italy. The main attraction is definitely the marina and its promenade, which comes alive especially at night with its stalls and tourists. Surely, the best part is getting lost in the streets and when you are tired to enjoy a good and iced beer. If you are looking for monuments you can see the greek Amphitheatre, which together with the City Hall and the Grand Mosque is the ancient heart of the city.

After Durres it was the turn of Tirana, the capital and the heart of the nation, it is, in fact, the administrative, political, cultural and religious. The city was under communist rule from 1944 until 1991. It’ s in the decades after the collapse of the regime that Tirana has experienced a period of growth, also due to the displacement of many Albanians who moved into the city to try a better life. With the rebirth of post-communism, the city and the entire nation had experienced intense urban development. In Tirana, in fact, were built parks, buildings and an example of redevelopment is the district with buildings constructed in style socialist, that the mayor Edi Rama did repaint with the intention of living in a colored city. In fact, today, top view, Tirana is one of the most colorful cities in Europe. Do not miss is the bazaar, “Pazari i Ri”, which is full of stalls and vendors of vegetables, fruit, meat and fish, but also clothes, shoes and also poultry. Authentic and fashionable without spending much you can enjoy great food, like the typical sausages accompanied by good beer cost a few Euros. The most modern and cool district is the “Blloku”, which can be reached crossing the river Lana, and that with its bars starting from aperitif is filled with young people and students who poured into the streets. The city center remains “Skanderbeg Square”, with a central statue eponymous hero, surrounded by the minaret of a mosque more’ ancient, from the Palace of Culture and the Museum of National History.

After starting from Tirana, I decided to head north arriving in the town of Shkoder (Scutari). Is on the border with Montenegro and its Lake Scutari is half Albanian and half of Montenegro. You can have a view of the entire city and of the lake from the top of the castle “Rozafa”, which takes its name from a young woman, who according to legend was buried alive by letting the breast to allow her to breastfeed her child.

The town of Shkodra is perfect to reach it Theth, a small community mountain on the border with Montenegro and Kosovo, on the Albanian Alps. It’s situated in a valley where people lead a simple life of herding and farming. Residents opened their homes and turn them into the guest house and provide food and accommodation to those who decide to stay overnight. It’s an experience that allows you to learn the authentic look of Albania from the culinary tradition. They served, in fact, typical dishes such as the lungs of cows and artisan bread cornmeal. Authentic flavors. The landscape gave me a starry and calm night and when you wake up, over the spectacle of grazing cows, a breakfast worthy of lunch and dinner on day predated: fresh milk, homemade jam and goat cheese. The main attraction, and I would say the only, is the “National Park” with its waterfalls and canyons. The park of Theth is connected to that of Valbone and the way you can cover on foot. A perfect choice for real hikers.

Albania is an incredible land which will surprise you. So if people ask you what you are going to do, answer him that. It’s a land with a strong and important history that almost no one knows, not even me before this trip, people are friendly, loves Italians, the landscape is breathtaking and the food tasty, all without spending a fortune. So just go!