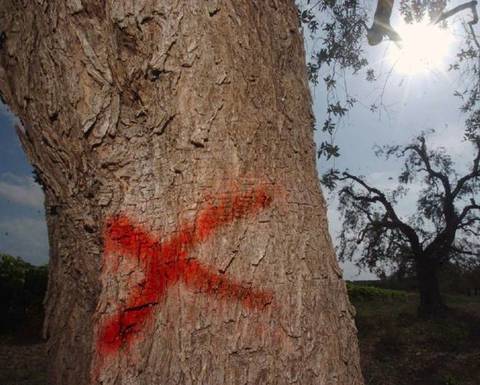 Olive trees are one of the pillars of Italy’s culture and culinary heritage. Since two years, a battle involving Puglian secular olive trees is stiring up huge emotions and controversy in Southern Italy. A recent phenomenon called CoDiRo, or Rapid Complex Desiccation of Olive Trees, has caused many of the trees in the area of Salento to dry out. At the beginning of the crisis, this condition was described as the result of a multiplicity of factors and pathogens. The bacterium called Xylella fastidiosa was identified as being one of them. Nevertheless, the big media machine quickly began to shift the blame to the Xylella fastidiosa while ignoring other contributing factors – among others, the depletion of the soil due to the use of herbicides and pesticides. 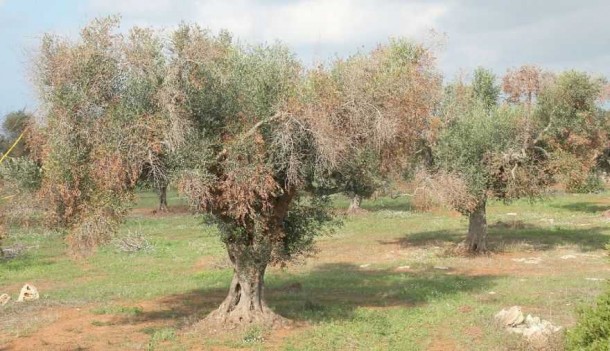 “The Massacre of The Olive Trees”

Until a couple of weeks ago, dozens of olive orchards suspected of being infected were condemned to complete eradication. Given the importance of olive oil production for the local and national economy, as well as their omnipresence in the region’s thousand-year history, this irrevocable decision was comparable to a massacre in the minds of an incredulous public.

What struck the most was the haste to sentencing to death 800.000 secular trees in the absence of concrete evidence linking the drying up process to the Xylella bacterium. This scientific evidence is still missing, while the existence of alternative efficient policies has been ignored and no other less invasive techniques that could save the plants have been considered.

According to the scientists, this solution was the only way to eradicate a deadly bacterium. Their version received approval by the regional, national and EU authorities. Many trees have been felled in the last months as a result of the implementation of the so-called Silletti plan, provoking sharp reactions and public protests from many local farmers. 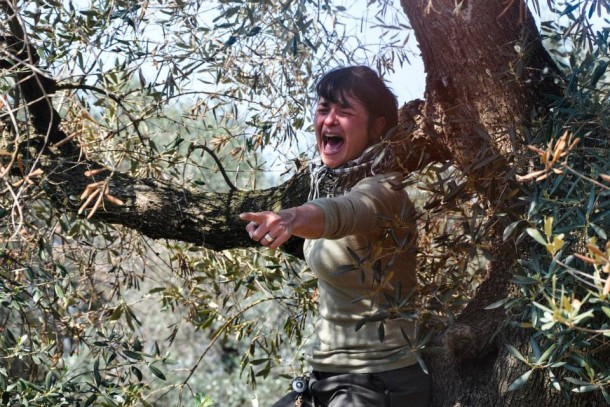 The plan takes its name from the Head of the Regional Forestry Corps who has been designated as a special commissioner for the phytosanitary crisis. Before the Christmas break, a shocking news: Silletti has been put under investigation together with nine other people, including researchers from various institutes and regional public officials.

The charges related to the investigation, officially opened on 18th December, range from negligent spread of a plant disease, to environmental negligence, material and ideological misepresentation committed by public officials in public documents and the destruction or disfiguration of natural beauties.

Judges have ordered the immediate cessation of the measures put in place to contain the spread of the disease, which include the felling of trees, because of the lack of sufficient grounds to justify such measures. After months of controversies and accusations accompanying the tree-felling, the remaining olive trees have been saved by the judicial authorities. For the time being. 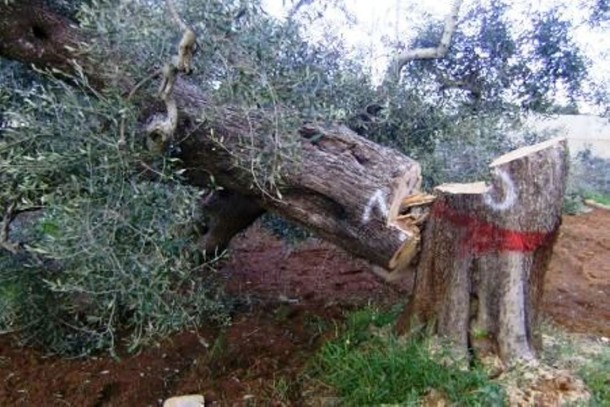 How did we end up here?

Many have pointed their fingers at the biotech industry. It was widely reported that in 2010, the pathogen was brought for the first time into Italy from California by scientists from the Institute of Mediterranean Institute of Agronomy in Bari – which is funded by biotech companies – to a meeting of plant pathologists, “for purposes of scientific research”.

Moreover, many believe that Puglian olive trees are dying due to the excessive use of the glyphosate, an herbicide marketed by Monsanto under the name Roundup, whose safety even for humans is being increasingly questioned. Others consider that the eradication of olive trees in large agricultural areas is in the interests of real estate speculators, mainly to build more and more tourist facilities. While the reasons are still debated, the popular belief is that this disease could have been intentionally caused for the purpose of eradicating local olive trees. 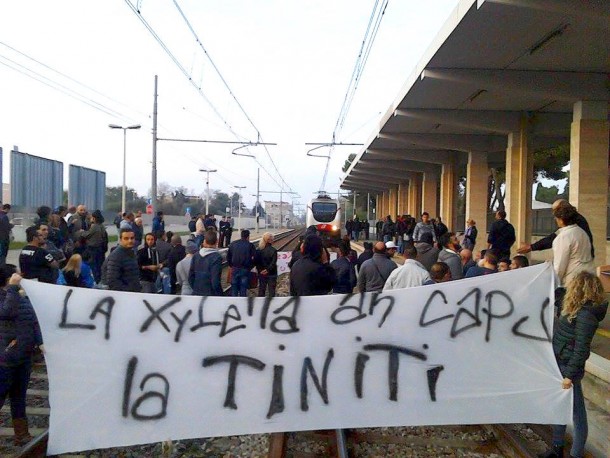 Public protest in Lecce. “Xylella is in your head” in local dialect

In addition to this mess, the foreign press has already depicted the investigation as an intromission by the judiciary into the realm of science. This is simply not true. The judiciary investigates facts, decisions and events when reasonable suspicions exist. One should question instead the impact of increasing cuts to public funding for research and education on the ‘good health’ of scientific research itself, and the direction it takes once it has to turn massively toward private funding.

France has already blocked the import of 102 species of plants. An exagerated move according to the Italian ministry of Agriculture, as endangered species had already been blocked. Far worse, it has also stopped olive oil imports, a decision which affects 14% of Italy’s total olive oil exports. It seems that Spain and Portugal approve the decision.

Italy exports olive oil to 35 countries in the world. Between 2013 and 2014 it was the second largest world producer: a total of 461.000 tons, accounting for one third of the European production, 40% of which coming from Puglia.