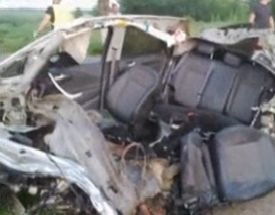 Hexi Pharma Owner Dead In The Midst Of Disinfectants Scandal

Hexi Pharma boss Dan Condrea, 40,  died Sunday evening in a car crash after the vehicle belonging to his father rammed into a tree due to excessive speed on a quiet village road in nearby Bucharest. Condrea was reportedly driving the car at above 150 km per hour without passengers inside, according to the witnesses’ accounts. The first stage of identification made police assumed it was Dan Condrea with the help of the documents they found in the car as his face was disfigured beyond recognition. The driver has been identified on clothing only by his ex-wife. However, the victim’s identity will be confirmed after a DNA test.

Preliminary information shows that the accident occurred at a high impact speed but the police also take into account the possibility of suicide as they found no breaking marks at the accident site.

Businessman’s ex-wife has allegedly said to some friends it would have been easier for him to kill someone else rather than to commit suicide but accepting it they must have forced him to do it.

The hypothesis of a murder has not been ruled out by Romanians but such a lead has not been confirmed by police. An official investigation is underway.

Hexi Pharma has been indicted on charges of failing to fight diseases after the disinfectants it had manufactured and sold to local hospitals and to Romania’s troops in Afghanistan were found over diluted up to ten or even to thousands times than stated.

Romania has long been shaken by huge corruption scandals that provide few answers but raise many questions. Codrut Marta, the former chief of cabinet of Sorin Blejnar, which is the former head of the National Fiscal Administration Agency, disappeared in May 2012 charged of supporting a criminal organization and complicity in tax evasion.