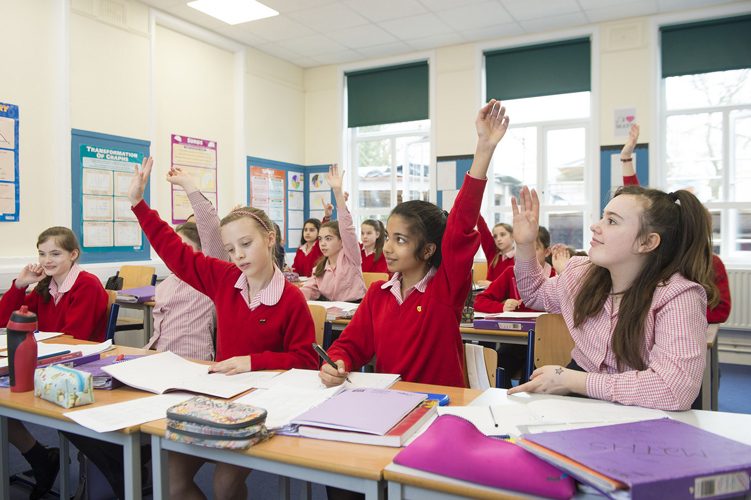 All the girls wanting to answer the question! | St Georges Ascot

The Fight for Gender Equality Continues in 2018

It’s hard to believe that the topic of gender equality (or lack thereof) is still relevant in the year 2018. Although great strides have been made throughout the years that benefit women’s rights, many women today still don’t feel equal to their male counterparts, one of the reasons being that there is still a wage gap in many workplaces around the world. As a female college student who one day hopes to work in the field of journalism, which was for so long dominated by men, this reality is troubling.

Like many people, I question how we can change the culture of gender inequality. Unfortunately, governmental laws cannot self-handedly erase the sexist mentality held by most cultures; instead, change has to start at the level of families and communities. I was lucky enough to grow up in a household where I was encouraged to pursue my passion regardless of my sex, however this is not the same for many girls throughout the world, more than 63 million of which haven’t even been able to attend school to learn about professions they are passionate about.

In the United States, however, we pride ourselves on equal opportunity and on “freedom and justice for all,” so it would almost seem absurd to say that many women still get paid much less than their male counterpart… right? According to the Institute for Women’s Policy Research, Hispanic women have the biggest wage gap – an average of 57% of what an average white man earns. As someone who attends one of the most diverse college campuses in the U.S., I haven’t yet met a female college student who isn’t passionate about this subject, and about changing the way our society treats women. But that’s the problem – it seems like throughout history, and even right now, it’s the women that are carrying this conversation. In a male-dominated world, it would make sense for parents to not only teach their daughters about equality, but to also teach their sons about the importance of doing so.

An article published in 2015 by Poynter, a school for journalism in Florida, starts like this: “In 1970, 46 women sued Newsweek for gender discrimination. Earlier this week, 42 women signed an open letter to the BBC demanding to close the gender pay gap.” Although this article was published 3 years ago, the topic is still completely relevant. It’s true that women have made great strides in the workplace since they were first allowed to work alongside men, but the fact that female journalists felt like they had to write a letter to their employer about closing the gender pay gap is ridiculously unbelievable. Men and women have the same intellectual potential, and by paying men more than their female counterparts, companies are partaking in an antiquated, sexist practice, and women have decided that enough is enough.

My point is this – female college students are becoming increasingly aware of the workplace practices that await them once they graduate. Many choose to speak out against a system that doesn’t see them as equals, but many times change never occurs.

In order to eliminate ideas that lead to gender inequality in our society, parents should not only speak to their daughters about the importance of equality, but most importantly to their sons as well. As a college student, I have been empowered by many women to apply to jobs, to sign up for classes that seemed too challenging, or to submit applications to places that would further my experience as a young journalist. I encourage societies throughout the world to do the same, because if men and women aren’t seen as equals, is a society truly “free”?