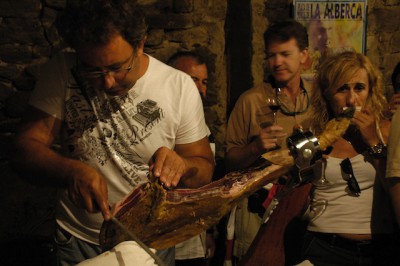 SPAIN. Yes, it is possible to extend your travels in Spain at no extra cost. In an exclusive interview, Stephen Bugno of GoMad Nomad shares his experiences with Pueblo Inglés and Vaughan Town.

You participated in both Pueblo Inglés and Vaughan Town, could you tell us a little bit more about that?

Stephen Bugno: Both Pueblo Inglés and Vaughan Town are great opportunities to extend your travels in Spain without any extra cost. Basically, the programs match Spaniards who are learning English with “Anglo” volunteers; and together you speak English for up to 14 hours a day! It can be exhausting (even for the Anglos speaking their native language) but it’s a great way to meet Spanish people and just relax in a rural setting and enjoy conversation. In exchange for volunteering, Anglos get free room and board.

Is there a difference between Pueblo Inglés and Vaughan Town?

They are very similar (actually, they originated from the same, but don’t advertize that fact.) The only difference is Pueblo Inglés is two days longer; seven days instead of five. That’s the main difference. The day to day scheduling and programs are almost identical: one to one conversation, two on two, three meals per day together, a group activity in the evening. I don’t think I would recommend one program over the other.

Afterwards, you remained in Spain teaching English. Where? And how did you find those jobs?

I had a friend living in Madrid, so that’s where I headed. I moved in with him and began searching for jobs. I looked on MadridTeacher.com and in the free English weekly paper In Madrid—two great sources. At that point, in the fall of 2008, there were still plenty of jobs, and with a few years of teaching experience (but no certification) I had a full-time position at a downtown academy in less than a week. 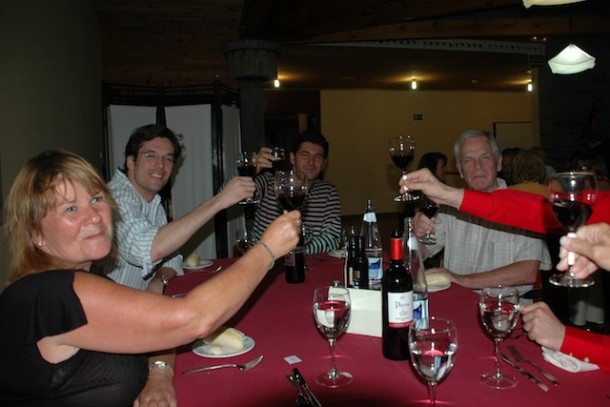 Teaching English and having fun in Spain | Credit: Stephen Bugno.

Do you have any advice for people who would like to teach English in Spain? Would you recommend starting with a program like PI or VT? Or perhaps getting a TEFL certificate?

I’m not sure that PI or VT would help people who are looking to teach in Spain, but it certainly wouldn’t hurt. It would be a good, cheap way to get acclimatized to Spain and possibly make a few connections.

A certification may help as well, but like I said, I don’t have one, and have gotten several teaching jobs around the world.

Of course, for teachers from the United States, there is the added hassle of a getting a work visa to teach legally in Spain. In order to get one, you need to be physically in the States, and your language institute must support that by helping with the paperwork. I don’t think very many companies are eager to go through with that, when they can get legal teachers from Ireland and the UK so easily. Back in 2008, plenty of schools were willing to hire undocumented workers. I’m not sure if that’s changed.

Do you have any recommendations for young people living in Madrid on a budget?

What helped my budget was moving to the place I had contacts. If you know someone, move there, and they will help you get set up.

Stephen Bugno has been working, volunteering, and traveling his way around the world for more than a decade. In 2008 he went to Spain to walk the Camino de Santiago a second time and afterwards ended up living in Madrid for nine months teaching English. He blogs at Bohemian Traveler and edits the GoMad Nomad Travel Mag.