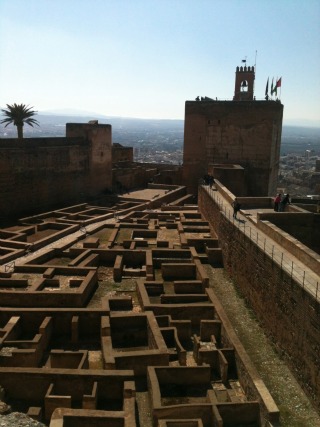 GRANADA, SPAIN. Let me take you on a virtual tour of my new home-for-a-semester: Granada. Read, or see, on to find out about my favorite picks in the city that is evermore famous for its beautiful Alhambra. (Naturally, the Alhambra is included here, too – see point 8. But don’t skip ahead, the other Andalusian highlights are well worth seeing, too.)

Café Futbol is one spot you will not want to miss. A staple of Granada since 1903, Café Futbol is centrally located in Plaza Mariana de Pineda. The deceptively large interior is typically packed with locals, and it’s no surprise why. Their tome of a menu is full of well-executed classics, ranging from flavorful paella to enormous coffee-ice cream concoctions. However, the crowned gem of the menu is undoubtedly the churros con chocolate. Expect the real deal: golden brown churros, fried to crispy, doughy perfection accompanied by a cup of rich, bubbly melted chocolate. It just doesn’t get much better.

2. People watching on the plazas 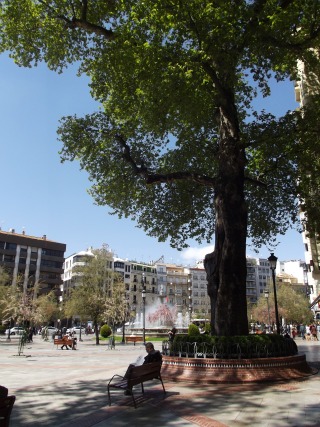 Granada is built for people watching. The entire city is dotted with sunny plazas and exuberant fountains calling out “sit down for a bit andwatch the city with me.” And that is exactly what you should do. Pick up some fresh bread, add wafer-thin slices of jamón ibérico, bring your instant picnic to the nearest square, sit down, and enjoy. Repeat…often.

3. Jamón and more at the Mercado San Agustín

Jamón at the Mercado San Augustin in Granada, Spain

Where is the best place to find scrumptious simplicities? The market of course. In Granada that means Mercado San Agustin, where the freshest meats, cheeses, olives, and breads all conspire to make you as hungry as possible. This Granada institution is a great place to get a feel for the local culture, language, and palate. For foodies and photographers, this is an absolute must-visit. 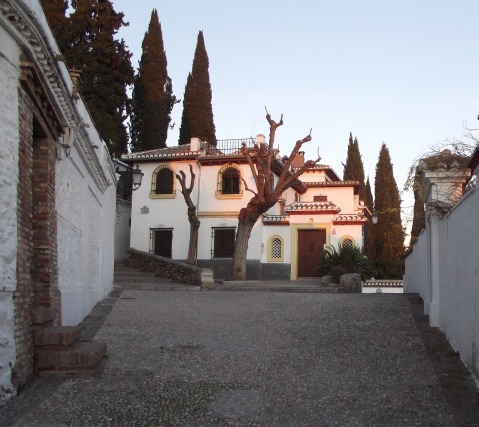 Granada is famous for its complex and interesting past, and nowhere is the weight of history more tangible than in the Albaícin. This neighborhood dates back to the 11th century, when the Ummayad general Ziri led the citizens of the ancient town Elvira to settle here. Granada was the final stronghold of the Muslim empire in Spain until the Catholic rulers pushed them out in 1492. That Islamic influence is palpable in the network of narrow streets, picturesque white houses, and graceful Arab arcs that wind up the mountainside.

5. Plaza San Nicolás, a lively space amongst the high-walled Carmens

The view from Plaza San Nicolás in Granada, Spain

An added Albaícin bonus is Plaza San Nicolás. This lively space emerges suddenly amongst the high-walled Carmens (a style of home typical in the Albaícin) and is always filled with musicians and artisans. Unfortunately, you’ll probably be too distracted by the incredible view to pay any attention to the plaza itself. Front and center is the glowing Alhambra, framed on one side by snow-capped mountains and on the other, the twinkling lights of Granada. Grab a couple of beers and sit back to watch what Bill Clinton once called “the most beautiful sunset in the world.” 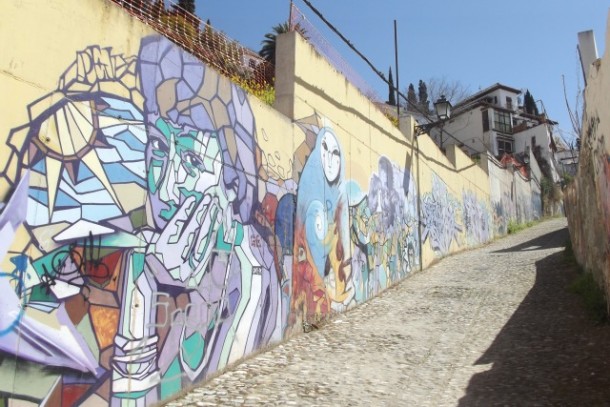 Graffiti in the Realejo neighborhood in Granada, Spain

If the Albaícin is the neighborhood plucked from a fairytale, then Realejo is its slightly more gritty and urban sister. Realejo was the Jewish barrio (neighborhood) during Muslim rule, and although many of the oldest buildings were destroyed with the onset of the Catholic kings, the rich history of Realejo is visible around every corner. This barrio has all the whimsy of the Albaícin, but exudes a darker, more mysterious air. This “rough around the edges” charm is most visible in the street art; Realejo is covered in graffitti masterpieces, and it’s not uncommon to see a pair of spray-painted eyes peeking out at you over a 12th century wall. You could easily spend hours strolling through the silent back streets of this outdoor urban art gallery.

7. Come for the Alhambra, stay for the free tapas 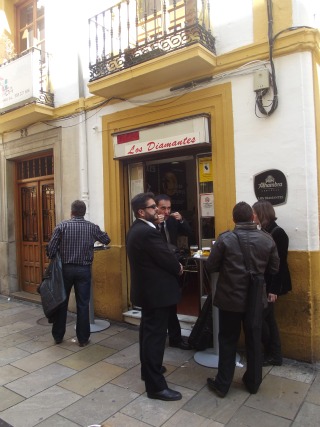 You might come to Granada for the Alhambra, but you’ll stay for the food. Granada is one the few remaining cities where free (that’s right- free!) tapas are included with a drink. Narrowing down the unending selection can be a bit overwhelming, but apply this simple rule you’ll be sure to succeed: follow the locals. If there are Granadinos pouring out of the door it’s a place you want to be.

Other great local tapas bars include:

8. The Alhambra: an obligatory tourist sight

The Alhambra is the obligatory tourist sight in Granada, and for good reason. Originally constructed as a military fortress, the Alhambra was gradually expanded into a palatial complex; each turn reveals a different patio, peaceful overlook, engineering marvel, military innovation, or beautiful garden. The Alhambra grounds are deceivingly large and include buildings that range in age from the eleventh to eighteenth century, so all you history buffs will get a concise run-through of Granadan history as told by the architecture. (Editor’s Note: entering the Alhambra can be difficult nowadays; be sure to book tickets beforehand!) 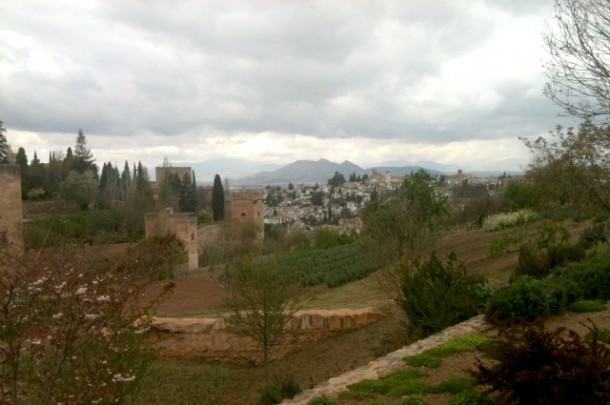 One unassumingly endearing aspect of the Alhambra its seamless transition into the surrounding environment. The palace melts into acres upon acres of parks and paths, just aching to be explored. For a more relaxed walk, explore the interior Generalife gardens (originally inspired by the Islamic concept of paradise). If you’re looking for a bit more of a challenge, hike up to the outskirts of the Alhambra grounds; these peaceful park grounds give a spectacular view of the mountains.

10. The diverse nightlife of Granada 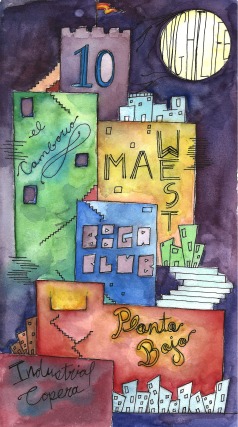 The relaxed atmosphere of daytime Granada picks up its pace after the sun sets, and soon the streets are crowded with Spaniards, young and old alike, enjoying some cold beer and good conversation. (side note on beer: the Alhambra brewery is located in Granada and all the local bars are stocked with it- try the Especial 1925!). The city has a diverse nightlife – which is taken advantage of by the over 70,000 University of Granada students – and is known across Spain for its thriving music scene. There’s no shortage of discotecas or live music, so here’s a quick rundown of the top picks…

Mae West: this enormous discoteca is a favorite amongst young locals; dress sharply and get excited for their 3 different dance salons.

Granada 10: another local favorite. Smaller than Mae West but more straightforward. This is the classic discoteca experience.

Booga Club: this cool club is literally and figuratively underground. They offer great alternative live music (check out their website for a complete line-up)

El Camborio: popular amongst international students this club has a gorgeous interior and offers a spectacular view of the Alhambra.

Planta Baja: another stellar underground club that draws live acts from all over Europe and the United States. Come mingle with locals and have a drink in their sleek, industrial style bar.

Industrial Copera: Love electronic or house music? This is your place.