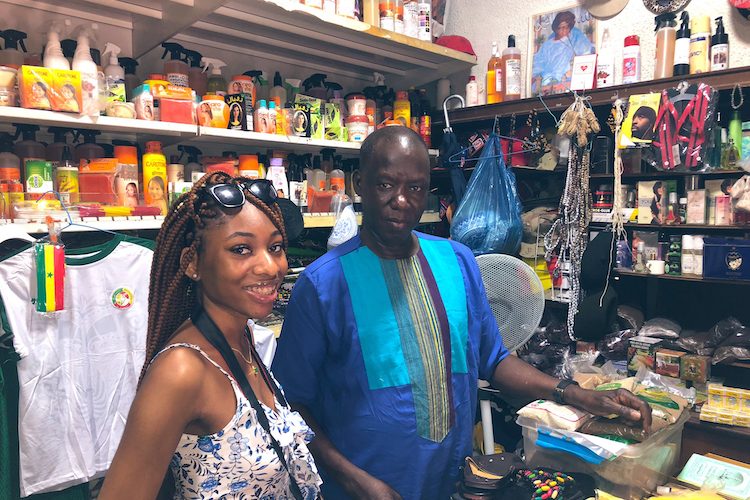 Falla and I in his shop | Kristen Ayanah

Black And Abroad: The African Experience in Madrid

Walking past the dashiki clad men on the street corner speaking accented French and English, one could think they are in the New York borough of Brooklyn, Flatbush in particular or London’s heavily black district of Peckham. But in fact, this is Madrid, Spain, a city which is becoming more diverse due to an influx of African immigrants concentrated in the neighborhood of Lavapiés. The growing black diaspora is changing the complexion of the city. There are many things to do and see in Madrid that deal with black culture which may be surprising to most visitors. 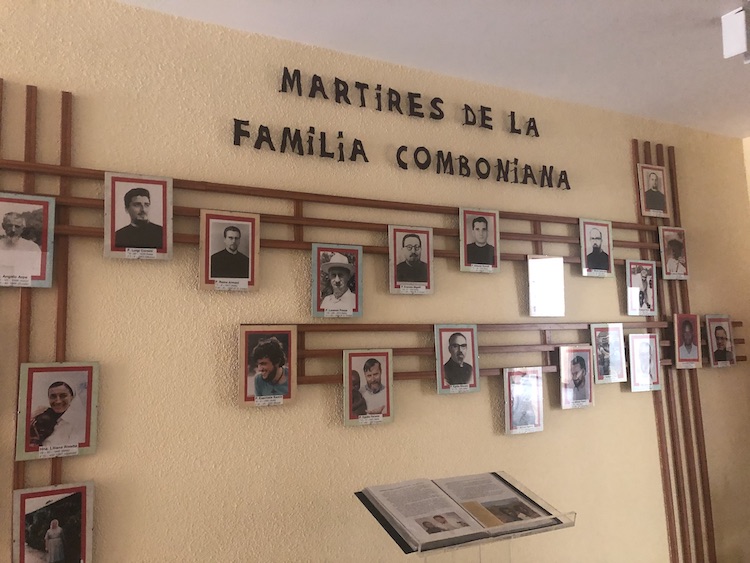 Many people from West Africa migrated to Spain and other countries in Europe for economic security and for a better life. In the 1980s, there was an economic recession in a lot of West Africa, so many of the citizens tried to flee. At the time, France became stricter on its immigration laws which lead to Spain and Italy becoming popular destinations for migration. The journey from West Africa to Spain often times is very dangerous for people who migrate illegally. The trip is often through the burning deserts of North Africa and by sea and many people perish on the way. For those who are lucky enough to arrive alive are forced to take low-paying jobs and status due to being undocumented, but this is a chance at a better life.

One West African immigrant who’s made a successful life in Spain is Falla Ousamaina, 55, who owns a shop in Lavapiés called “Hip-Hop” that sells African-style clothing and ethnic skin care and hair products as well as accessories.

“I love Spain, business is successful and I able to support my family here,” He said.

Falla’s shop is a vibrant place right near the metro station as soon as you enter Lavapiés. Before moving to Spain, Falla lived in New York City. He says that here in Spain he has been more successful with his store and it is less competitive. When asked about his life in Spain as an African he replied, “No problem.” He has been living here for 30 years, has owned his store for 20 years and says that he does miss Senegal and tries to visit every year. 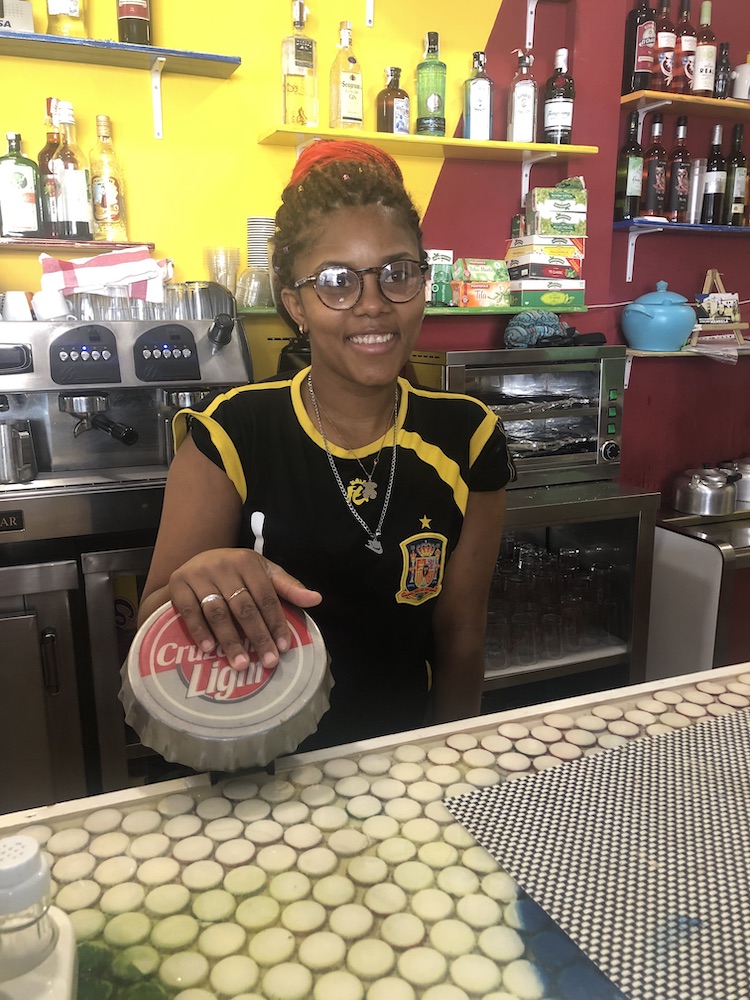 In addition, an interesting part of black culture that is prevalent in Lavapiés is the food. There are many Senegalese restaurants serving many traditional dishes. One of the restaurants I visited was Restaurante Mandela 100. As I entered, I was swept away by the vibrant colors of yellows, greens and other Pan-African colors. The tables are set with table clothes and on each table, there is a menu with a picture of Nelson Mandela on the cover. Some of the dishes that they offer would be white rice, plantains, fish, chicken and more. I got to speak with Ana Santana, 30, who is an employee at the restaurant. She has been working here for two years and says she migrated from the Dominican Republic with her family at age 23.

“I enjoy working here, I am able to provide for myself and it’s a fun environment,” she says as her and her co-worker laugh at each other’s jokes. 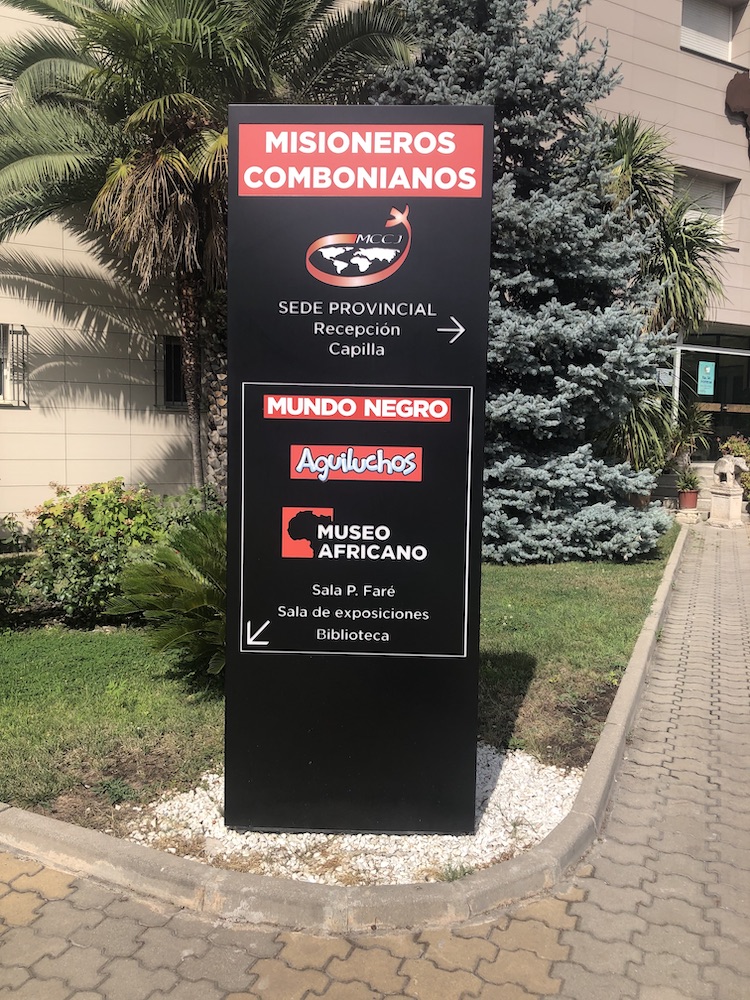 Another breathtaking place you can visit in Madrid that deals with black culture is the  Museo Africano. When I went it was closed. This is something I want to emphasize! This museum exhibits are closed from mid-July until mid-September, so keep that in mind and don’t be like me. But I was able to sweet talk my way in. Some of the pieces that I did get to see were very interesting. There was a wall dedicated to missionaries who were killed all over the world that were associated with the museum. I spoke with Miguel Angel Llamataven, 55, who has been the director of the museum since 2017. He began working in the museum in 1992-1996 but then left for a while to study in Kenya. The museum is owned by Catholic missionaries who began working in Sudan and moved into countries like Congo, Chad, Uganda, Kenya and Ethiopia. Often times the pieces are from these countries and are given to the museum as gifts or some pieces were purchased. “My favorite pieces are the masks. Which mostly come from Nigeria and Ghana. They are so unique and abstract,” Miguel says.

The masks are very detailed with facial features and abstract. Aside from the exhibits, this museum also has a monthly magazine entitled “Mundo Negro.” This magazine was created 60 years ago, and the title means “Black World.” The goal of the magazine is to highlight issues and stories that relate to black culture and the African diaspora.

“It’s hard to speak about Africa in Europe because the news isn’t relatable, but it NEEDS to be done,” Miguel explains.

A new magazine is published monthly with a special issue every three years, the magazine is broken up into different sections which feature news/issues in Africa, life/religion, African culture (reviews on books, movies, music, etc.) and lastly, a section dedicated to sharing someone’s story who is from Africa and is making a difference in Spain. Overall, there are many things you can experience in Madrid that deal with black culture, from the stores and restaurants in Lavapiés to the Museo Africano. The possibilities are endless!

*An appointment is needed for groups*

PLEASE NOTE THE MUSEUM IS CLOSED FROM MID-JULY TO MID-SEPTEMBER.