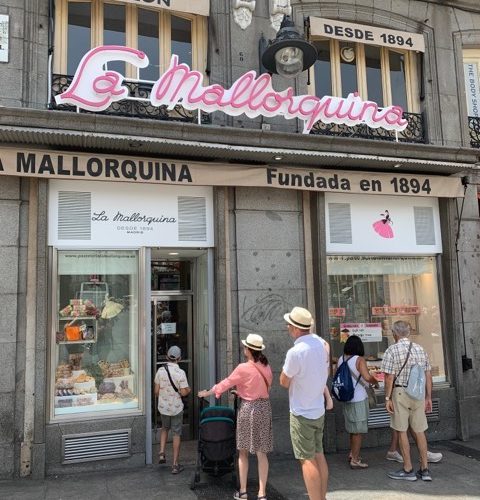 A Sugarholic’s Guide to Madrid

Sun-drunk Spaniards lined the corner, their café-fuelled whispers animating the arterial street. Like them, I am on the hunt. We stalk the streets, noses tilted up, following the wafts of sickly sweet azúcar de vanilla, searching our senses for the telltale scent of cáscara de limón. In the opposing storefront, hidden behind a deep green awning in the upscale district of Salamanca, lies our prize: Madrid’s famed milhojas.

While every tourist knows to sample Spain’s succulent tapas and seek out each city’s finest sangria, Spanish desserts have stayed largely within the realm of local cuisine. Concealed in the menus of street cafes, scattered around the thronged square of Puerto de Sol or sold fresh around El Retiro Park, here are the four best (in my opinion)—and most quintessentially Spanish—desserts to try in Madrid. 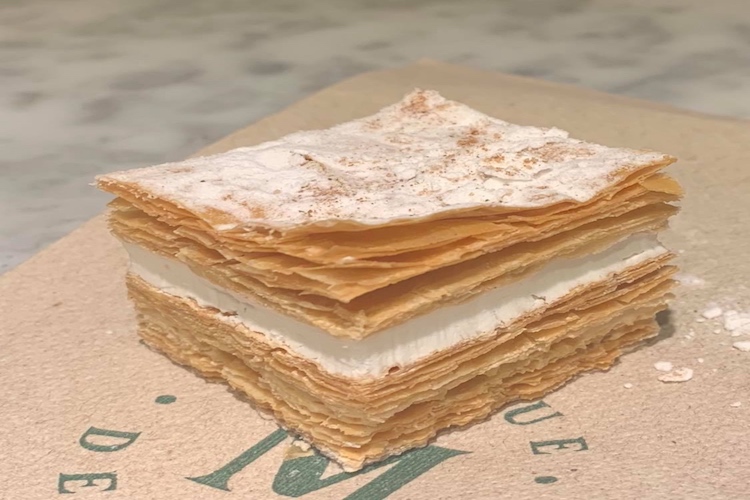 A flakey dessert consisting of puff pastry infused with fragrant vanilla sugar and lemon peel,  milhojas are typically filled with a creamy, custard-like filling and topped with a thick layer of powdered sugar. Bearing a passing resemblance to donuts, milhojas combine the simplicity of European pastry with the exoticism of Spanish citrus. According to Lauren Aloise, founder of food tour company Devour Madrid, “milhojas are popular with people of all ages, and are a great quick snack at any time of day. They really hit the spot as a late-afternoon snack, or merienda, accompanied by a coffee.”

My quest for milhojas began innocently; a search for horchata (a refreshing beverage made from pressed tiger nut) following a scorching walk through Eva Duarte de Perón Park. It was en route to a cafe that I would discover Manolo Pasteleria Artesanal. Located along Calle del Conde de Peñalver, the bakery is well known by Madrilenians for its reinvention of traditional pastry, and bite-sized squares of buttery milhoja.

There is no sweeter Spanish treat than torrijas—sliced stale bread soaked in eggs and milk, then deep fried in olive oil until crisp. A cousin to English bread and butter pudding and french toast, torrijas are served hot or cold, and are traditionally topped with honey, cinnamon and sugar.

While the first torrijas recipe can be traced back to Roman times, the version enjoyed by Spaniards today finds its roots in the 16th century. Originally eaten by pregnant women to help restore energy, torrijas became a lent staple during the Middle Ages, as it compensated for the absence of meat from the diet. The dessert would once again take on a new purpose in the 20th century, when its simple composition would make it one of the few treats accessible during war-time food shortages.

La Mallorquina, Madrid’s premier source of torrijas, was founded in 1894 and sold the treat through the destitute years of the Spanish Civil War. Now celebrating its 125th anniversary, the bakery sees the dessert as not only an integral part of its history, but a notable feature of the city’s gastronomy. Served only during Lent, La Mallorquina’s torrijas pay homage to the cultural significance of the dessert to Spain’s many Catholics by maintaining the dessert’s association with the Easter season.

If you seek torrijas outside of springtime, you can find them on the menus of most restaurants. Hidden behind a red door in the city’s centre, La Casa de las Torrijas offers a wide selection of the dessert, including traditional flavours as well as more inventive takes on the dessert, such as torrijas soaked in wine and various liqueurs. 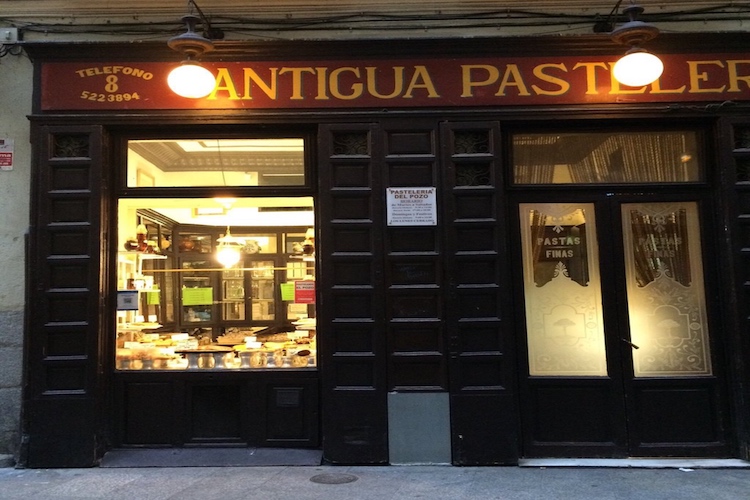 Another prized dessert—and holiday staple—is rascon de reyes. These oval delicacies are made of a brioche-like sweet bread that is shaped into an oval and topped with brightly coloured candied fruits. Traditional fillings include whipped cream, meringue or custard cream.

Found in every bakery and sold on every street corner during the holiday season, rascon de reyes are traditionally eaten on January 6th: Día de Reyes, or King’s Day, which commemorates the arrival of the three Magi. During the King’s Day celebrations in Spain, a figurine of the baby Jesus is hidden in the dessert; which is meant to represent the Holy Family’s flight from King Herod‘s Massacre of the Innocents. Whoever finds the figurine is blessed, and must take it to the nearest church on February 2: Día de la Candelaria, or Candlemas Day.

Despite belonging to a specific holiday, you can find these treats year around. I first ran into them at Antigua Pastelería del Pozo (founded in 1830), the oldest pastelería (bakery) in Spain. If its charming, wood-panneled facade is not enough to entice you inside, their delicate, crown-like rascon de reyes certainly are. 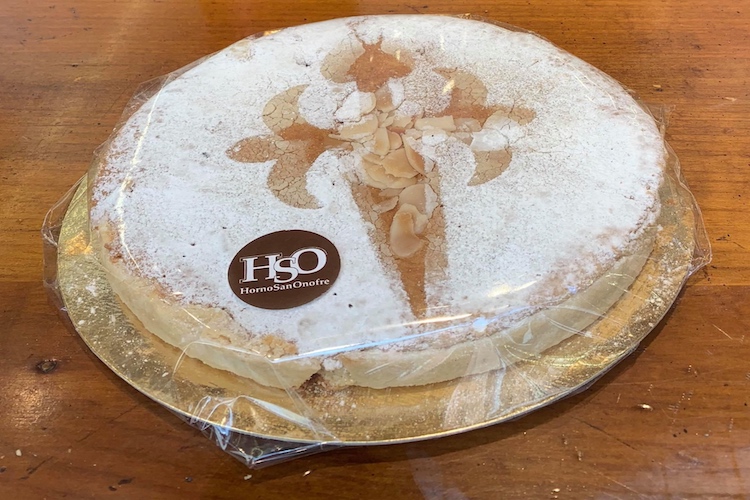 Another cultural staple is Tarta de Santiago—a cake consisting of a shortcrust pastry base filled with ground almonds and flavoured with lemon zest, sweet wine or brandy. The dessert is characterised by its ornamentation; with an imprint of the cruz de Santiago, or cross of Saint James,  visible against a background of powdered sugar.

The patron saint and protector of Spain, Santiago de Compostela, or St James, is famed for  preaching christianity in Galicia, and is said to have been resurrected to aid in the plight to rid Spain of the Moores. A nation-wide celebration is held each year on July 25 in what is known as the Feast Day of St James the Greater. During this time, Tarta de Santiago is sold along the street, and can be found in temporary stalls throughout El Retiro Park.

Originating in the Middle Ages, Tarta de Santiago hails from the seaside region of Galicia. The dessert has often been portrayed as a food representative of not only Spanish cuisine, but culture. In May 2010, the European Union gave Galician Tarta de Santiago the status of a protected geographical indication (PGI) in Europe; making it a recognised traditional speciality.

It is the cultural significance of Tarta de Santiago that makes it a local favourite. Madrilenian Daniel Campillo fondly remembers eating the treat after completing the Camino de Santiago, a famed Spanish pilgrimage. “Tarta de Santiago was not only a way to celebrate the end of my trip, but a means of connecting myself to the Spaniards of the past who had walked the same route for me. When I eat Tarta de Santiago, I feel proud of my country. I feel Spanish.”

The best Tarta de Santiago can be found at El Horno de San Onofre. Located in the vibrant city centre, the bakery uses the owner’s own family recipe to give tourists an authentic flavour of Madrid.

From religious staples to cultural classics, Madrid’s dessert scene offers a wide variety of tastes for both the adventurous and shy of palate and as a wonderful way to delve into a delicious manifestation of Spanish culture.