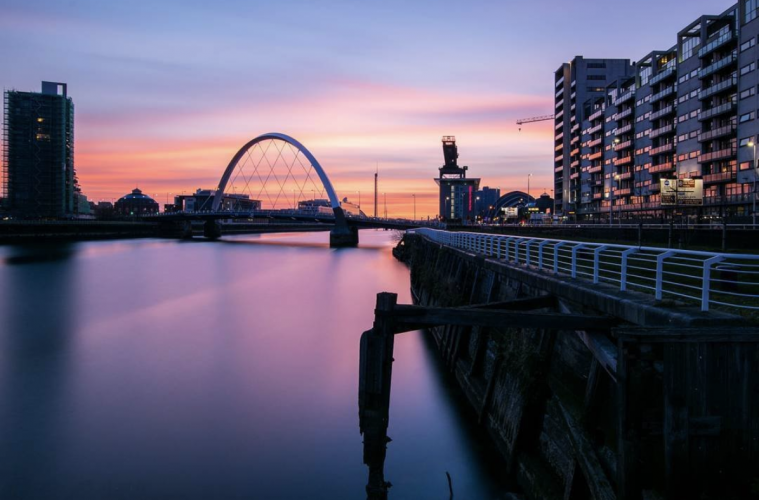 10 of the Most Instagram-worthy Spots in Glasgow

Planning a trip to Scotland’s largest city? Make sure your camera has enough battery life to snap all these picturesque locations. From university buildings to museums, murals and telephone boxes, here are all the must-visit locations in Glasgow for the best photo ops…

Stylish eatery Embargo on Byres Road is the ideal location for an Instagram photo—they’ve cleverly had wings painted outside the restaurant with their Instagram handle next to it for passers—by and customers to snap a quick and quirky photo of themselves as an angel and post on social media! And they’ve also painted on some mini wings too for children and pets. Aww.

Glasgow’s riverside looks good from all angles. With its many bridges, the BBC Studios, Finnieston Crane, hotels and houses and the SEC and Hydro, there’s no shortage of directions to point your camera. On clear days though, the area looks its best as you can see the outlines of the buildings reflecting in the river.

A photo opportunity for all Doctor Who fans. Glasgow has a number of Tardis’! Officially they’re, ‘old police boxes,’ but where’s the fun in that?? The boxes can be found in a number of locations across Glasgow including outside the Botanic Gardens (disguised as a tiny coffee shack), on Sauchiehall St (though this one is red) and on Wilson St (hiding in plain sight as a mini takeaway café.)

Right in the heart of Glasgow, George Square is iconic. A great place to watch the world go by, George Square, is more than just a civic square and meeting place—it’s also host to 12 statues of inspirational men and women and Glasgow’s City Chambers making for a great location for the perfect picture!

Part of Glasgow’s Mural Trail, don’t miss taking a quick pic with Mitchell Street’s impressive and ‘interactive’ street art. The World’s Most Economical Taxi depicts a floating Taxi which wouldn’t look out of place in Disney’s Up and if you stand at the right angle, you can appear to grab a balloon. On the same street is contemporary street artist Smug’s Honey I Shrunk the Kids—catch this one at the right angle too and it looks like the girl with the magnifying glass is plucking people straight from the ground!

Another iconic Glasgow landmark, the Botanic Gardens has been a popular escape from the hustle and bustle of the centre since 1817. It’s only in recent years though that the Gardens have been used as the backdrop for some artsy Insta photos. Inside the Kibble Palace and the other greenhouses are some rare and extremely picturesque plants—pose for some pics as you take in the beauty of nature!

One of Scotland’s most popular free attractions, Kelvingrove Art Gallery houses world—famous artwork all year round as well as some temporary exhibitions. Get someone to take some candid photos as you enjoy paintings by Monet and installations by Charles Rennie Mackintosh.

Spinning off into the weekend.✨ . . : @elliecutajar

Nestled within Glasgow’s West End is Glasgow University. A truly stunning collection of buildings, the University is very Hogwart’s-esque. And who needs to know that you’re not in the magical school of witchcraft and wizardry itself?

Scotland’s national center for design and architecture, The Lighthouse offers impressive views across Glasgow. A good spot for pictures though, isn’t Glasgow’s skyline as impressive as it is. Rather it’s a picture from the top of the many stairs that visitors climb to appreciate the views across the city. Bonus points for having someone stand at the bottom as you take your picture from the top.

A cobbled backstreet in the West End of Glasgow, Ashton Lane hosts an array of bars, restaurants and a cinema but can easily be missed. A hidden gem, the Lane also has some overhead fairy lights which look absolutely magical at night.