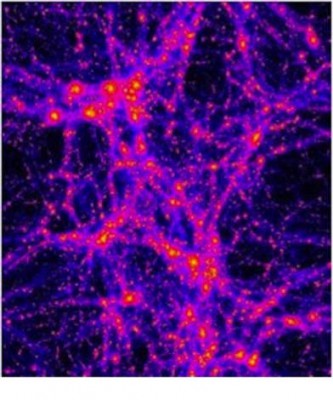 GLOBAL. What exactly is dark matter?

That is the question that has been puzzling scientists for the past 8 decades.

In 1932, the Dutch astronomer Jan Hendrik Oort concluded, after measuring the motion of the stars in the Milky Way, that the mass of the galactic neighbourhood must be higher than the mass of the observed matter.

Around the same time, the Swiss astronomer Fritz Zwicky found the gravitational mass of galaxies, inferred from their rotation curve, to be approximately 400 times larger than the mass of their visible matter.

To give a general idea, the matter close to the center of the galaxy rotates almost like a rigid rotator, like a vinyl record. As we move further away from the center, the rotational velocity of the matter is dropping at a constant, proportional rate. So as we approach the outskirts of the galaxies, where the matter is less and less bound gravitationally, we would expect this velocity to drop to zero. However, observations differ from these expectations. It has been shown that the rotational velocity remains constant with the distance to the center, giving a constant, “flat” rotation curve. It appears as if there is some unseen matter keeping it together. This idea of some unseen matter is consistent with the previous conclusions that there is more to the universe than we observe.

Zwicky called this matter dunkle Materie – dark matter, a matter that neither emits nor absorbs light. Therefore, it cannot be detected by electromagnetic radiation. This is different from “ordinary” matter, called baryonic.

Nowadays, the Planck mission results predict that dark matter constitutes 84.5% of the total matter in the universe and 26.8% of the total mass-energy content. This is roughly 5 times more abundant than baryonic matter. 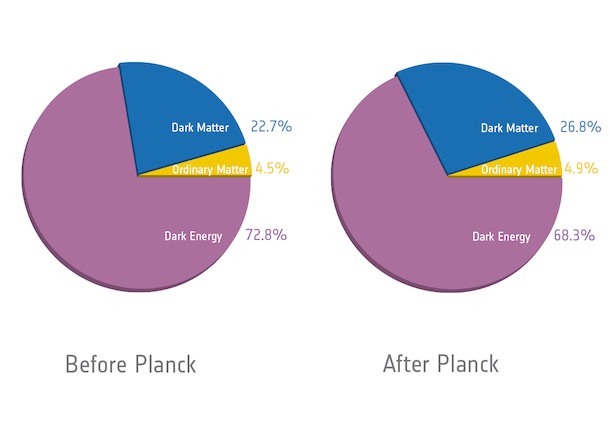 This study is just one example of the impressive research done in the field in the past 10 years. During this time, dark matter has become one of the top problems to be solved in physics. The SAO/NASA Astrophysics Data System (ADS) is the most extensive used digital library that contains more than 7 million records of astronomy and physics literature. After a simple search it will give 470,000 papers related to dark matter, with 70% of these published in the last 10 years alone.

Dark matter is now widely considered to be made of particles that mainly interact through the gravitational force. However, it is still unknown what exactly those particles are.

What’s hot and what’s not

In principle, the higher the velocity is, the lighter the mass is, so the hotter the particle is.

By convention, particles with energies in the electron volt  (eV) range and below are considered HDM. Neutrinos, for example, are fermionic particles with a mass that may lie in the meV – eV range. These particles are the only dark particles that have been measured in experiments. However, due to their very small mass, they cannot be solely responsible for the state of the universe as we “see” it.

CDM particles are heavy, slow-moving particles.  Neutralino, a hypothetical supersymmetric particle with a mass above the GeV scale, is the most favoured candidate in the category of particles generically called WIMP – weak interacting massive particles.

Although WDM could be anything between HDM and CDM, several constraints point to a few keV mass, with the so-called sterile neutrino as the most promising candidate.

Axions, other well-studied candidates, are particles theorized to be both cold and hot.

Dark Matter versus the substantial ether and the mainstream predicament

There is, however, a grand resemblance with the ether era in the way that scientific community addresses the problem. Just as most of the physicists agreed on the existence of ether one century ago, (only to be proven wrong), today, most of the mainstream physicists are ferocious partisans of the cold dark matter model, in spite of its difficulties.

Cold dark matter simulations fail to explain some of the observed properties of galaxies. However, it remains to be seen whether that is a consequence of our modelling limitations or is a hint that CDM is not the solution that reconciles theory with observation.

Alternatives to cold dark mater theories are warm dark matter ones, with the sterile neutrinos as the most promising candidate. Although not fully embraced by the majority of scientists, WDM model seems to be a worthy opponent, providing a good fit for the present status of the structure in the universe, on both small and large scales.

While often rivalling in the literature, in fact, these theories are not mutually exclusive. There is the possibility that dark matter is a mix of different families of particles.

New simulations implemented with a more accurate description of the physical processes that take place in the universe might be able to shed new light on the dark matter properties. Yet, the ultimate challenge for any model will be detecting its particles. It is therefore too early to bet on a single model just yet, even with the high odds attributed to the CDM – WIMP by the majority of scientists.

Several experiments have been searching for decades for weak interacting massive particles without coming up with conclusive results. Most recently, the Large Underground Xenon detector (LUX) reported no events that could be related to the WIMPs, consolidating previous findings from experiments like XENON.

In the search for axions, the Axion Dark Matter Experiment (ADMX) is yet to find the exotic particles.

Meanwhile, the CoGeNt detector data published earlier this year show effects that can be hints of the existence of a Milky Way dark matter galactic halo, as previously shown by the DAMA collaboration.

These seemingly contradictory conclusions increase the degree of impatience and scepticism. Hence, the question is raised: is it that dark matter that elusive, or is dark matter just no-matter?

Beyond the mainstream, on stranger tides

Bolder theories are currently flirting with the idea that dark matter is not really matter, but just a reminder of our novice understanding of physics and the laws that govern the universe on different scales.

Some scientists argue that Newton’s law for the gravitational force becomes tricky for small gravitational accelerations, and therefore, points to the need for a Modified Newtonian Dynamics (MOND) approach.

Swimming against the current, other models are toying with antigravity, virtual particles, scalar-tensor-vector gravity (STVG /MOG), and several other theories. We will discuss these in a second article.