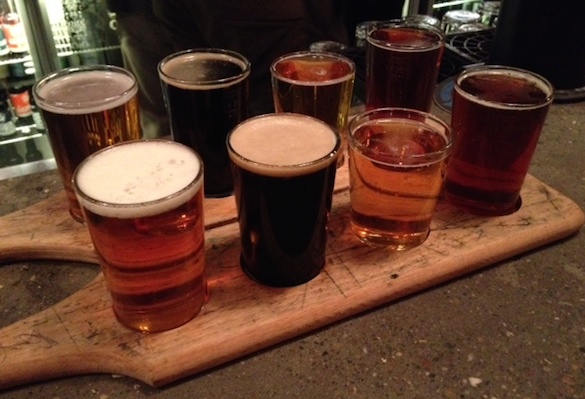 EDINBURGH, SCOTLAND. If you like craft beer, go to Brewdog! The ambiance and beer culture are not to be missed. The environment is very cool, with industrial concrete mixed with wood, creating a modern and hip interior. They serve their core beers, limited release beers, and visiting beers from different breweries.

James Watt and Martin Dickie founded this brewery in 2007 and claim that this brewery is Scotland’s largest independently owned brewery. You may recognize them from the US Esquire Network TV show Brew Dogs, where they travel the US and try and create craft beers. At times, the brewery has claimed to make the most alcoholic beer (they made a limited addition beer in 2010 that had 55% alcohol in it). The bar in Edinburgh opened in 2011, and was their second bar. Their first bar was opened in Aberdeen in 2010. They now have 16 bars around the world. 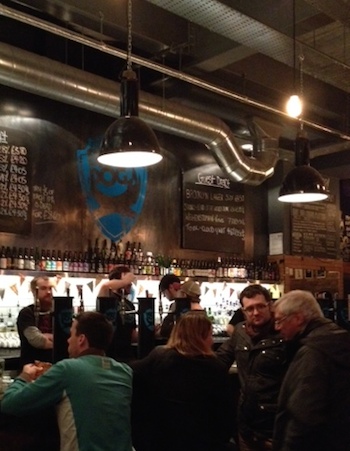 When I visited, I ordered a flight board, which had a tasting of four beers. Each beer was 1/3 of a pint, and the whole thing cost a tiny bit over 6.00 pounds. The tasting was awesome because I got to sample different kinds of beers and compare their tastes. My favorite was the stout, dark with hints of coffee. The IPAs were all amazing. They tasted sweet, had a hint of fruit, and were delicious.

I have also heard that their homemade pizzas are amazing. They cost 9.00 pounds and look very artisanal. You can also set up to attend Beer School or take a beer tour with staff. These lessons will teach you about beer, and can be up to an hour or two.

Wi-Fi is free. Board games are also available. Like most stuff in Edinburgh, Brewdog is easy to walk to (and it’s really close to the Royal Mile).