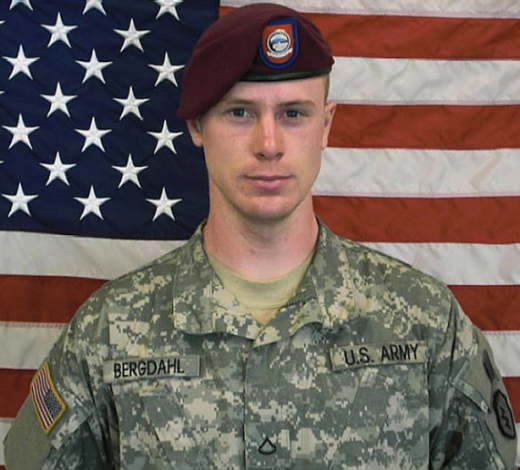 U.S.A. When I first heard news of the prisoner swap involving American Sgt. Bowe Bergdahl, and the release of five Taliban Guantanamo detainees last week on MSNBC, I was increasingly torn as more and more facts were leaked.

Instantly, I knew this topic would make for a compelling opinion article, but I could not whole-heartedly pick a side for the life of me.  As I continued to do my research amidst the “political tsunami” this decision has created, I spent hours upon hours trying to convince myself that the arrangement was a disastrous mistake made by the Obama Administration, as that was the most dominant opinion on the web thus far; however, I couldn’t help but feel cold and heartless. The question at hand is over the priority of the life of a U.S. soldier; there should be no debate, regardless of the “deserter” rumors.

The United States government and the Department of Defense bear a strong loyalty to U.S. military personnel, and aim to assure that the preservation of their lives and well-being are a top priority when placed in danger of isolation, beleaguerment, detention, or capture while participating in a U.S.-sponsored activity or mission.

Although there are several kinks that need to be cleared up in terms of the legality of the execution of the swap, it appears that the Obama administration can’t even recover a troubled American soldier from captivity without being bombarded by his opponents, including more than a few hypocrite Republicans who once supported this decision, in attempts to gain political power.   As Democratic strategist Paul Begala once told CNN, “If Barack Obama cured cancer, Republicans would attack him for putting oncologists out of work.”

Four months ago, Senator John McCain also reportedly told CNN that he would support the exchange of the five Taliban leaders for the release of Sgt. Bergdahl, “I would support ways of bringing him home…and if exchange was one of them I think that would be something we should seriously consider.”

Predictably, as soon as the Obama administration actually took action on the trade, McCain didn’t skip a beat to switch positions and quickly criticize. Democrats have claimed that phony Republican Party members and the conservative movement are now abusing Sgt. Bergdahl as a “political football” for maximum political advantage.

Despite the fact that Obama failed to adhere to the law of informing Congress 30 days prior to the transfer, there were a number of factors that led the administration to act quickly on their less-than 30-day window of opportunity, such as the increasing decline in health of Sgt. Bergdahl that was apparent in the most recent video provided by the Taliban—one senior American official claimed he “looked shriveled,” while military medical specialists confirmed he was undernourished among other things.

The video also fed the growing fears within the military circles that the chances of freeing Bergdahl would become significantly more difficult as the end of 2014 drew near—when the number of United States troops are scheduled to withdraw extremely, including C.I.A. specialists and other intelligence agencies that would play a key role in the finding of the soldier.

All in all, the swap made sense. Critics are missing the point; the administration has long been trying to engage with the Taliban as the U.S. war effort dwindles down. The release is, in effect, a part of a broader effort to satisfy those interests. It is a scary situation when the United States negotiates with terrorists, keep in mind this is not the first time it has been done—reflect back to the Bush administration—however, American officials, from President Obama on down, have stressed that a good end to this war can only be a negotiated end—which entails an accord with all factions, including the homegrown Taliban faction. Is it possible this decision could serve as an epiphany to a wider set of talks in the future? Hopefully.

As for Bergdahl, he indeed faces a long and controversial journey home. Much of the critical clamor accusing him of deserting his post, which in severe cases can be punishable by death, has not factually been determined and nonetheless is separate from the U.S. Personnel Recovery Mission’s policy of striving to “leave no man behind.” After he is given some time to recover back in the country, he should be investigated, given a fair trial (if appropriate) to determine his guilt or innocence relating to the event of his capture, and if found guilty sentenced accordingly, or given an honorable discharge for the latter.

Before his capture, Bergdahl told his family via email that he was “ashamed to be an American,” and that the U.S. Army is… “ the army of liars, backstabbers, fools, and bullies…I am sorry for everything here…the horror of the self-righteous arrogance that they thrive in. It is all revolting.”

I would only hope that his perspective has significantly upgraded—as America did its duty to bring him home alive, it is now his duty to face the consequences, if any, that lie ahead.