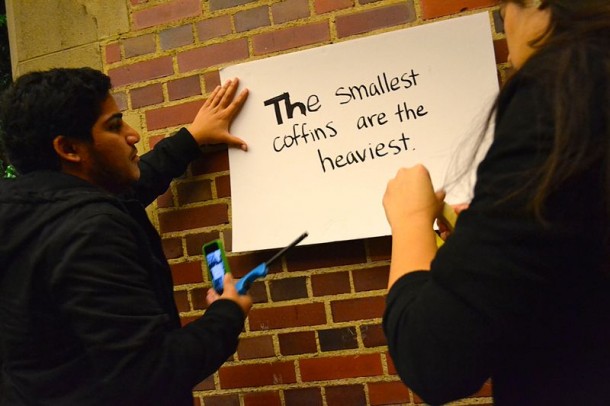 The past decade saw acts of terrorism blown out of proportion by various extremist groups. As the newly emerged jihadist, militant group ISIS, or simply the Islamic State, manipulates the attention of global media by conducting a series of war crimes and human rights abuses, one horrifying aspect of terrorism is being neglected – the increasingly premeditated, vulnerable targets chosen by terrorist groups.

132 school children out of 145 total casualties perished in the 2014 School Massacre in the northwestern Pakistani city of Peshawar. Many media outlets dubbed this event as the 9/11 of Pakistan not only because of the deadly consequences but also the young, vulnerable and helpless targets of this attack. Seven terrorists from the Tehrik-i-Taliban stormed into the Army Public School’s auditorium on Dec. 16 and indiscriminately gunned down children who gathered there. The unfathomably hateful aim for these foreign perpetrators was not to hold hostage but to kill as many children as possible.

Only months earlier in April, the Islamic jihadist group Boko Haram kidnapped 276 girls from the Government Secondary School in Nigeria. The adducted girls were sold into forced marriage, prostitution or even slavery after the terrorists interned them in a camp and raped them every day.

Less than a year later, Somali militant group Al-Shabaab claimed responsibility for their massacre of 147 college students at Garissa University College in Kenya on Apr. 2, 2015. Gunmen chose the pre-dawn hours to attack on dorms where most of the students were still asleep. In the midst of the carnage, non-Muslim students were taken hostage and shot.

Horrific terrorist acts such as these are being repeated every day on larger and smaller scales in armed conflict areas and war zones. In a world where children and students were already vulnerable in most places, violence and fear seem to have gradually seeped into their safe zones – the schools. Terrorists increasingly feed on the deadly impact of such attacks on children and schools as their proudly branded “accomplishments.” They aim to decrease education opportunities and resources, stall social development, damage economic activities and destroy established infrastructures.

Schools and universities are supposed to be a safe zone for students to study and grow towards becoming the next generation of professionals contributing to a country’s social, economic and political development. Their growing association with terrorist attacks, massacres and abductions might have something to do with the escalating military use of schools and universities by armies on different sides.

In a call for governments and states to endorse the new Safe Schools Declaration at the United Nations Security Council debate on children and armed conflict on Jun. 18, 2015, the Human Rights Watch organization points out in a video the danger and risks imposed on children as a result of the military use of schools and universities: unsafe environment, psychological trauma and education distraction were only part of the harmful effects; the more serious consequences point to sexual exploitation, enforced recruitment, death and injuries. Yet on top of these tortuous effects for children and students, schools and universities seem to have also become an avenging ground for terrorists with predetermined casualties.

The road to stop terrorism from encroaching on the lives of children and students in schools and universities will be time-consuming and risky at best. Nonetheless, with the close cooperation of states in obeying the Guidelines for Protecting Schools and Universities from Military Use during Armed Conflict produced by the Global Coalition to Protect Education from Attack, a future filled with safe schools and happy students is still hopeful.