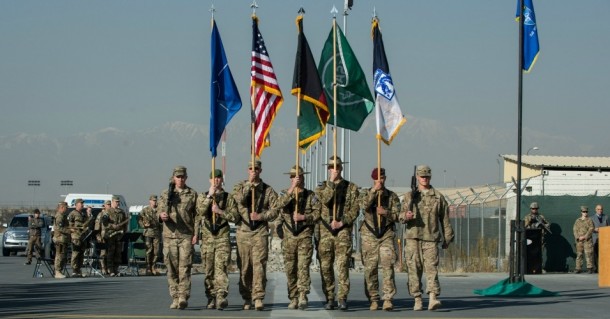 U.S.A. The U.S.-led North Atlantic Treaty Organization’s (NATO) occupation of Afghanistan officially came to an end on December 28th, 2014, as the iconic green and white flag of the International Security Assistance Force (ISAF) was lowered. The quiet ceremony marked an important transition in the state’s recent history, shifting responsibility from the international coalition to the state and it’s Afghan National Security Forces (ANSF).

However, eager to close the recent chapter on Afghanistan, the American public and Obama administration alike seem willing to overlook or cast away their gaze from the deteriorating security situation in the state, which will only get worse with the international withdrawal. In the last year alone, Taliban insurgent attacks have increased dramatically in major cities such as Herat and Kabul, locations which have been NATO-ISAF strongholds for years. While the current transition of power from Hamid Karzai’s government to that of Ashraf Ghani and Abdullah Abdullah has been relatively peaceful and civil, it is important to note that the Afghan government and ANSF remain quite weak compared to the insurgency.

The strength of the insurgency is dependent upon a number of factors. Optimal insurgencies emerge in states that possess weak governance, strong intrastate factions (whether they be based on ethnic, sectarian or tribal bases), and substantial foreign support. The Afghan insurgency, that is, the Taliban, exhibit all three characteristics, creating a unique yet complicated case. These three characteristics are unlikely to disappear anytime soon, which makes the international—more importantly—U.S. withdrawal quite problematic for Afghanistan.

Security at the local level remains questionable at best. While urban areas such as Kabul are relatively secure, vast swaths of rural areas in Afghanistan continue to experience heavy fighting in insurgent confrontations. This level of insecurity at the local level not only limits the mobility of the population, but endangers the legitimacy of an already fragile government. Individuals that rely on the provision of basic services such as healthcare, education and security, feel abandoned when the aforementioned services are not adequately provided. Thus, it shouldn’t surprise many that rural areas of Afghanistan remain as insurgent strongholds.

Pakistan’s role in arming and propping up the Taliban insurgency mustn’t be overlooked, either. Its relationship with the Taliban (in addition to other extremist elements) did not begin with the U.S. invasion of Afghanistan in 2001. Indeed, this intriguing relationship began with the Soviet Union’s invasion of Afghanistan in 1979 and lasted through the 1980s, where Pakistan acted as a proxy of the U.S. in its covert support of the Afghan mujahideen. Some members of the mujahideen adopted a radical interpretation of deobandi Islam from the madrassas in Pakistan, and subsequently formed a group called the Taliban. This group, which couldn’t have possibly come to power and assert control over Afghanistan without the help of Pakistan, maintained a close relationship with Islamabad and the Pakistani Security Directorate, the ISI. Although Pakistani leaders and policymakers publicly dismiss any mention of Pakistani support to the Taliban, many journalists and members of the population acknowledge that the covert support indeed does exist. Members of the U.S. Department of Defense as well as the Central Intelligence Agency are also aware of Pakistan’s Janus-faced policies, yet U.S. policy of providing billions of dollars of direct economic and military aid endures.

Based on the previously mentioned factors, Afghanistan’s future remains bleak, at least with current U.S. policy and strategic goals. I doubt that these policy preferences will change anytime soon, yet I am certain of one thing: if policies don’t change, an ISIS-like situation may emerge in Afghanistan in a few years. This is an incredibly dangerous prospect, considering a nuclear armed state, Pakistan, sits right at its doorstep.