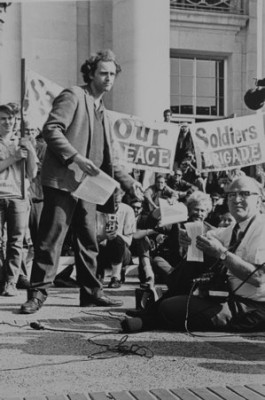 Revisiting the Free Speech Movement of ‘64

U.S.A. Against the backdrop of the cold war, a new war was being fought, but this time on U.S. soil. The Free Speech movement occurred in the years 1964 and 1965, and was a student-run battle to protect such rights as freedom of speech and political activism on campus. Although it took place on University of California, Berkeley’s campus, the Free Speech Movement had a global reach that still endures today.

The leader of this crusade was Mario Savio, a philosophy major who had both unwavering dedication and an eloquence, which could literally rally thousands. Savio and the other demonstrators initially began as your typical students.  However, when campus officials passed a ruling that prohibited students from utilizing certain areas for the promotion of public or political action, they decided to peacefully protest. In order to protect their rights, they first had numerous meetings with the school board, which ultimately did little good.

Eventually, Savio and the other student leaders turned to sit-ins and rallies. One such occupation on Decemeber 2, 1964, of Berkeley’s Sproul Hall gathered thousands of people, and demanded that the university administration reconsider its ban on direct action. This sit-in is noted as one of the most influential protests of the time, as close to 80% of students refused to attend classes until their voices were heard, and could continue to be heard. Moreover, during the protest, Mario Savio gave a famous address in which he stated,

The speech stirred the masses, and can be seen as the climax of the movement itself.

The immediate aftermath of the demonstration included not only the arrest of close to 800 protestors and the removal of the prohibition of student activity on and around campus, but also global coverage and media support for the protection of free speech.  However, the most important outcome can be seen as the way in which December second sparked countless other demonstrations in the name of protecting civil rights.

Today, the Free Speech Movement is an example, a reminder to all that there exists a responsibility to protect our rights, and not let them passively be taken from us.