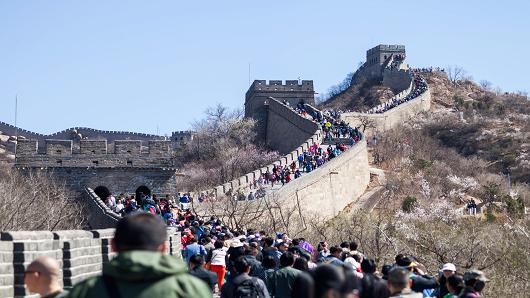 Economic Crisis: Are More Chinese Going to Vacation at Home?

China’s widely reported economic collapse earlier this year created shock waves that spread around the world. China, which for many years now has driven growth in a significant section of the world’s economy, had for the first time seen its stock market crash and questions over its future prospects begin to rise.

The vast majority of the conversation in the international media has been about how China’s economic stumble will effect other nations, yet very few have taken the time to consider how this has impacted the Chinese people and China itself.

Obviously, exploring how the economic crisis has effected the Chinese people would be an incredibly vast topic and one that could not be covered in one article.

However, one prominent feature of China’s economy that has endured since the opening of the country to the wider world in the 1970’s and 80’s is the tourism industry.

From 1978 and the premiership of Deng Xiaoping opened China up to those from abroad, and vice versa. The beginning of this process in 1978, saw just 230,000 foreigners visiting China, whereas by 2007, this number had increased rapidly to 54.7 million according to the United Nations World Tourism Organization.

China has become one of the leading tourist destinations in the world, and with plans to relax visa requirements for visitors in the coming years, it seems that the Chinese government still has its eyes firmly focused on foreign tourism.

However, China’s domestic tourism industry and the future of it poses a curious question. Now in the face of the economic collapse this year one could rightly ask how this will affect the vacation habits of the Chinese people and whether they will opt for the travelling domestically.

Domestic tourism within China is greatly beneficial to the local economy as we’ve seen over recent decades with the creation of jobs and the greater consumption of local goods. Significant movement within China by local tourists has also contributed to the additional economic and social development for more isolated, rural areas of China.

As of 2007, domestic Chinese tourism bought in over 77 billion $US and played an important role in the rapid rise in national GDP in this period. Prior to this year’s economic crisis, the Chinese government launched a new initiative related to boosting domestic tourism.

The aim of the new government plan is to spend over 5.5 trillion yuan (US$895 billion) on domestic tourism promotion, and the preservation of popular sites by the year 2020.

It seems that through these plans, the Chinese government is very determined to increase domestic tourism and place a strong emphasis on integrating and enhancing the role of the domestic tourism into the national economy.

With this understanding, one could easily come to the conclusion that the economic downturn that occurred earlier this year is likely to have little immediate impact on this new domestic tourism initiative.

Enhancing the potential revenue from the domestic tourism industry would be a beneficial investment for China, and thus it would make little sense to remove funding from this sector and allow it to slide into disarray.

If the economic downturn continues, then such significant investment in the domestic tourism sector could suffer, but that is an issue that is impossible to resolve now.