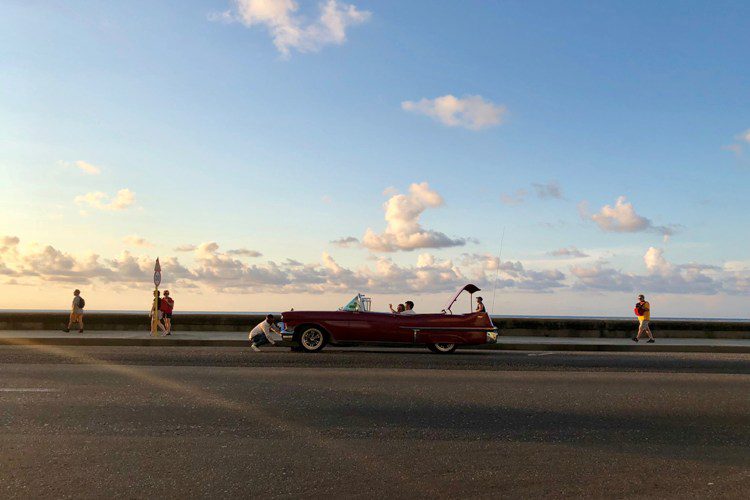 Turistas take a selfie with the Malecon sunset as they wait for their taxi driver to fix the car’s mechanical issue. | Natalie Bauta

As the sun set behind the seawall of El Malecon, a woman in an orange sun dress flowed to the rhythm of the salsa music played by Cuban musicians at La Fortaleza de la Punta, a well-known historic spot at the edge of Havana’s concrete promenade.

Musicians singing and playing their instruments in restaurants or on the streets is one of the city’s delights and a celebration of Cuban culture, and the island’s different genres of music– rumba, salsa and Afro-Cuban– are one way of bringing locals and turistas together.

Musician Carlos Alfaro of the grupo musical ‘La Pachanga’ says people come to Cuba because of word-of-mouth around the world that the Cubans are collectively full of joy and like to have fun, much of which has to do with the culture, music and street festivities.

The arts fall under the cultural sector of tourism that draw people in for its soulful charm, and as more visitors enter the Caribbean country, livelihoods are changing for those working in the tourism sector and for the residents who interact with them. 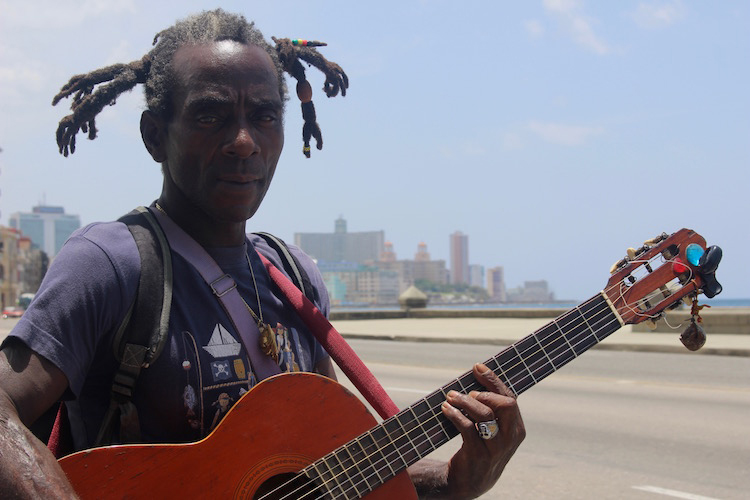 The Litoral de la Habana’s daytime visibility attracts visitors, so Orlando Garcia-Zuñiga, 40, gets an early start to his day of work at 2 p.m. instead of 6 p.m. | Natalie Bauta

Orlando Garcia-Zuniga, a 40-year-old street musician, makes a living walking along the Malecon singing to tourists from 6 p.m. to midnight hoping to earn some money playing his guitar.

“People can tell me what kind of music they want to listen to,” he said. “I get a lot of requests for romantic songs.”

Tourism has been important to the Cuban economy for the past 100 years but suffered a decline following the 1959 Communist revolution. With the collapse in the early 1990s of the Soviet Union, which was Cuba’s main source of international economic support, the government turned to opening up the economy to private enterprise.

This industry was a natural sector to attract badly-needed foreign exchange and in 1993 officials allowed private individuals to open restaurants and bed and breakfasts, and operate taxi services. 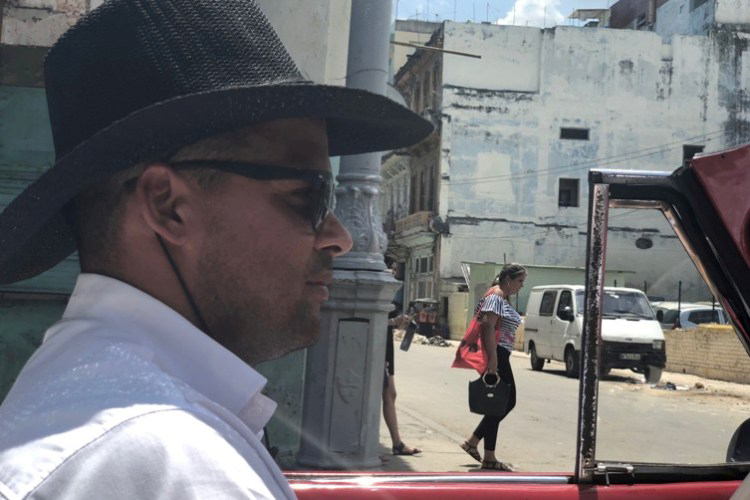 The classic car taxi service is a non-government affiliated operation available to tourists, which began in 2008 with about five cars. Now, there are hundreds of antique cars in business and the oldest car ferrying tourists around is from the 1930’s.

“It has given many people jobs because it’s in the private sector and pay is a hundred times better,” said Yosbel (who preferred not to disclose his last name), 35, a classic car owner.

Yosbel has been in the taxi service for three years working from 7 a.m. to 8 p.m. under the Havana sun in his red convertible 1950 Chevrolet Deluxe. Each car is owned by the drivers. They buy the parts. They fix it themselves. And they must request a permit in order to legally provide a personal taxi service.

According to Yosbel, it is one of the jobs that makes the most money in the country next to working in hotels, bars and restaurants. 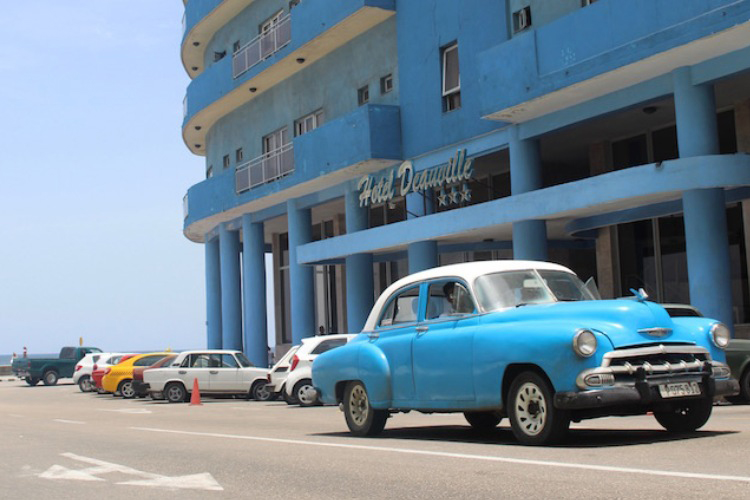 Hotels, like Hotel Deauville in Central Havana, are a competitive place of employment as more Cubans are look to work in the tourism sector; especially as it continues to grow | Natalie Bauta

“A lot of us young people have tried to get into the tourism sector given the unstable conditions in Cuba,” said Lazaro Marrero, 24, who works at Hotel Deauville in Havana.

Marrero works 12 hours a day– earning around 10 CUC (around $10) a month as an employee in the maintenance department.

Other Cubans have established their own businesses patronized by travelers. Restaurants and cafeterias that typically cater to neighborhood locals selling café con leche, pastries, ham and cheese sandwiches have seen the integration of Cubans and travelers of all nationalities when they go to the same places to grab their morning cafesito.

“A variety of people from everywhere come to eat at this restaurant because they want the local Cuban experience,” said Yiliann Leon, 29, a waitress at a neighborhood cafeteria in central Havana called Algarabia.

The busiest period for the restaurant when they get the most tourists is between December and January, Leon said.

El Moro, the Malecon’s seawall, is where people sit to watch the see the sunset illuminate el litoral Habanero, or the Havana seashore, and sometimes they will drop in to buy refreshments on a hot day at small convenience stores directly in front of the historic boardwalk. 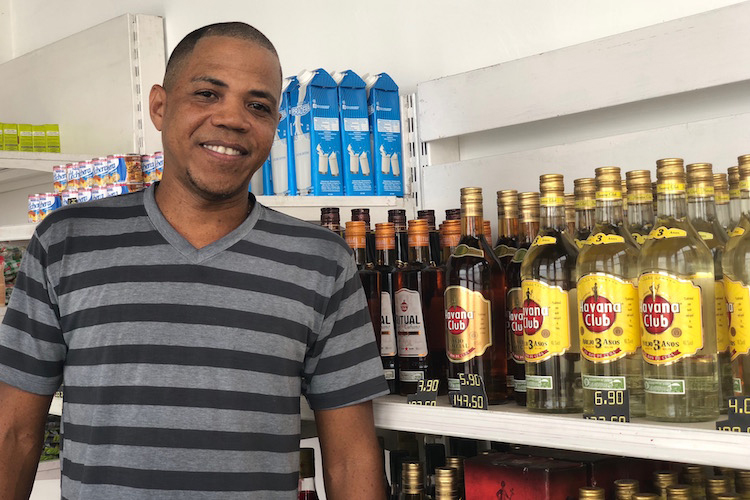 Yosmel Aluong, 39, works at one of the shops that sells goods including imported beer, Havana Club rum, water, coffee and cigarettes.

Travelers walk in and out on a daily basis given its location.

Things would be extremely difficult without tourism, Aluong said.

“Because of tourism, Cubans have felt more obligated to prepare themselves, learn the [English] language, and cultivate themselves in cultural matters to be more familiar with it to be able to communicate it to others,” Aluong explained.

Another growing sector within the tourism industry are the casas particulares, which are locals’ homes in the form of hostels where travelers can stay as an alternative to paying significantly more at a hotel. Instead of going to a corporation or the government, at casa particulares the money goes directly to the owners of the home.

The owner of the El Viajero hostel, Aida Machado, 48, has been hosting travelers since 2009.

The central Havana hostel is more than a home for Machado and her family, now she looks forward to welcoming people coming from all parts of the world. Machado gets excited when people want to practice their Spanish because it gives her a chance to practice her English as they speak to her in Spanish and she responds in English.

“Initially, I wanted to live separate from ‘el turismo’ but decided not to and now living in the house with the guests makes for a better experience for me and the visitors,” Machado said. 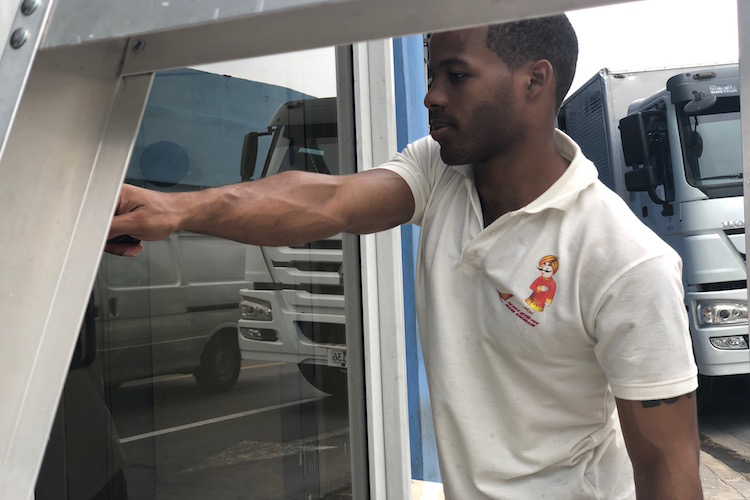 Lazaro Marrero, 24, cleans the Hotel Deauville’s windows as a cristalero in the maintenance department | Natalie Bauta

The travel and tourism industry in Cuba will employ about 138,000 jobs by 2027, according to the World Travel and Tourism Council.

“When people visit our country they are very shocked that we’re this happy given the little that we have,” Alfaro said. “When tourists come here, they forget their problems.”