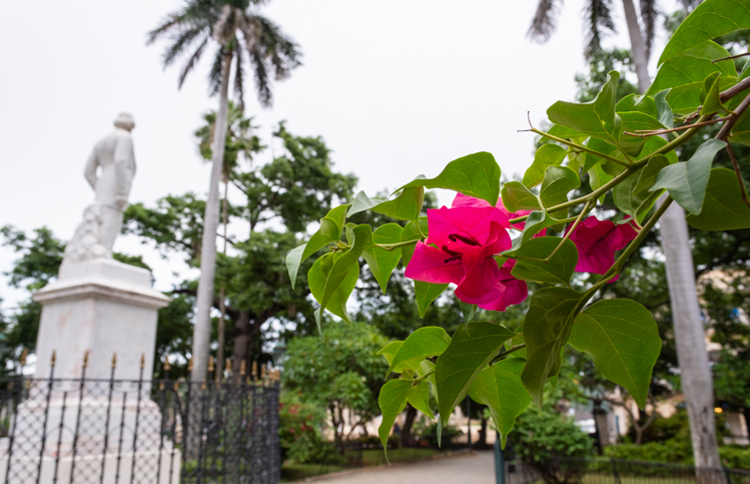 After navigating the bustling streets of Havana, my itinerary led me to a rich mixture of colors and sights. The opening atmosphere of the Plaza de Armas was a welcoming space to arrive in after traversing through the city challenged by the exhausting sun and humidity. I took refuge under the shade provided by the luscious trees that fill the center square and offer a location for locals and tourists alike to relax, socialize, and observe the beauty of the surrounding area.

Within the square are located four fountains in each corner, positioned towards the center enough for a sidewalk to run along the edges of the park, each with a walkway that forms an intersection leading to its center. There stands a statue of Carlos Manuel de Céspedes, a Major General of the Liberation Army of Cuba born in 1819, who died in combat fighting Spanish troops after being betrayed by his own people.

As I looked at the statue, my attention was drawn away by the blooming pink flowers that adorned the interior square’s edges, creating a stunning contrast amidst the aged white monument, the grey stone paths, and the surrounding greenery and architecture. From the northeast space of the plaza I caught a glimpse of the expansive port, which features the Estatua El Cristo that can be seen in its full beauty from the sidewalk adjacent to the water as the cool ocean breeze creates a truly refreshing sight before further exploration. 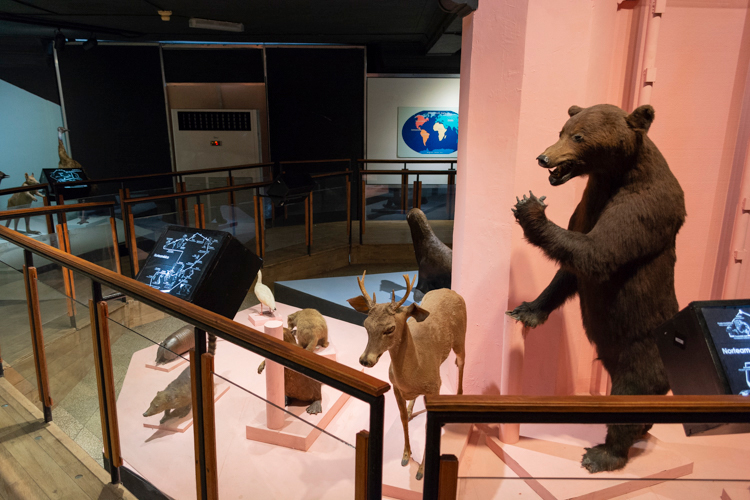 A necessary stop in the Plaza de Armas is the Museo Nacional de Historia Natural Cuba, an intriguing, two-story building showcasing an array of displays varying from the biology of each continent and Cuba-specific wildlife, to exhibits covering evolution and astronomy.

As I entered the museum, I was greeted by a warm receptionist who gave me a receipt in exchange for the three CUC (around $3) charge to enter. I left my bags at the entrance in exchange for a wooden square that marked the location of my belongings. Although all texts throughout the museum are in Spanish, there were many intriguing sights that an English-speaking visitor could enjoy. Making my way to the back of the exhibit, cooled by the air-conditioning unit blowing chilled air directly towards me, I turned left to enter an exhibit featuring a multitude of taxidermy from each continent. I was surprised at the array of animals the museum possessed and by the uniquely orchestrated layout of the animals, each from different regions of the world.

The portraits of scientists such as the great Gregor Mendel led the way towards the staircase to the second floor, which housed a very informative display of the plethora of local wildlife. I was astounded to see the multitude of historic and present-day sea creatures native to Cuban waters. Witnessing the vast array of nature unknown to me drew me to reflect on the abundance of dynamic life across the globe, as many of the creatures appeared prehistoric and foreign. 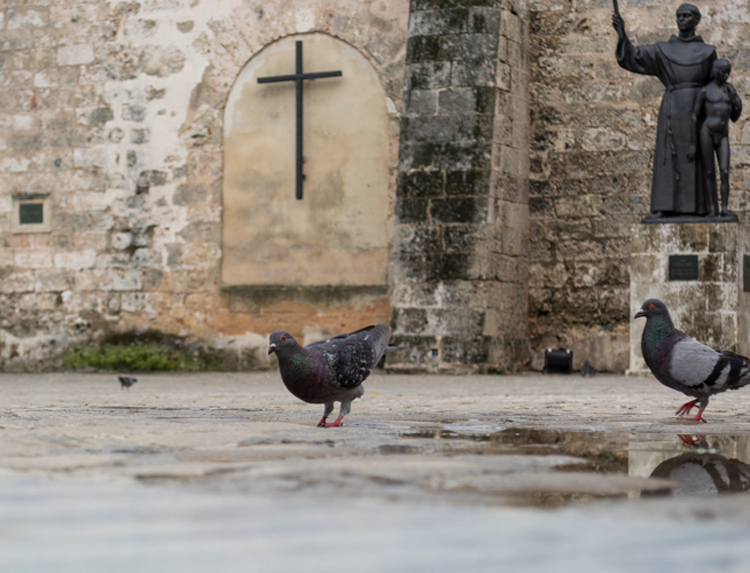 I made my way three blocks southeast where I arrived at the Plaza de San Fransisco Asis, a hotspot of colonial architecture. Entering the historic area, I was overwhelmed by the stark structures reaching towards the sky far higher than all the surrounding buildings. The freshly-renovated constructions created a historic ambiance which made it feel as if I was experiencing Old Havana centuries ago. Parents can be seen watching their children feed and chase the flocks of pigeons in the center of the plaza. The simplistic atmosphere made this sight a welcoming place to stop and rest while touring the squares. I grabbed a seat and admired once more the classic architecture unavailable in such a grandiose fashion anywhere else in the world.

The Basilica Menor San Fransisco de Asis was constructed in 1738 and has been continually renovated for many years to maintain its original architectural design. The basilica hosts occasional classical concerts at a low entry cost of two CUC’s with some of the greatest musicians in all of Cuba such as the pianist Frank Fernandez. 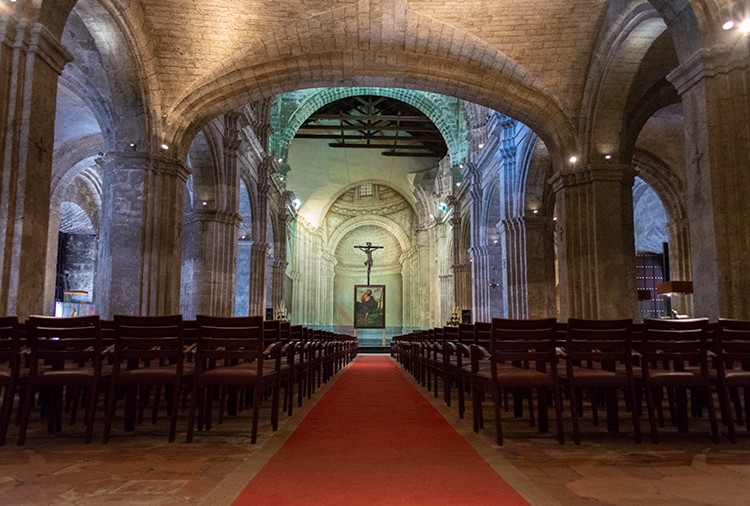 Center aisle view from inside the basilica | Noah Dockery

The main entrance to the basilica is designed with three rich, dark wood doorways, the center featuring crisp vertical lines and metal  ornaments attached to it. Six authentic church bells guide the visitor to the magnificent opening, topped with an intricately chiseled stone arch. I made my way in to be astounded by the towering pillars that create a Spanish colonial aesthetic with slight nuances of ancient Roman architecture. The acoustics created by the design of the basilica must be experienced in person to truly understand its magnificence. Looking down the center aisle towards the small center stage is a surreal experience. The masterfully painted wall appears as if it were three-dimensional, yet upon further inspection is nothing short of another iconic artistic addition to the splendid construction that is the Basilica Menor San Fransisco de Asis.

Heading east towards the white marble stairway, I inspected the rooms of religious artifacts before reaching the balcony found on the second floor. There is no better place to view the Plaza de San Fransisco Asis than from this spot. 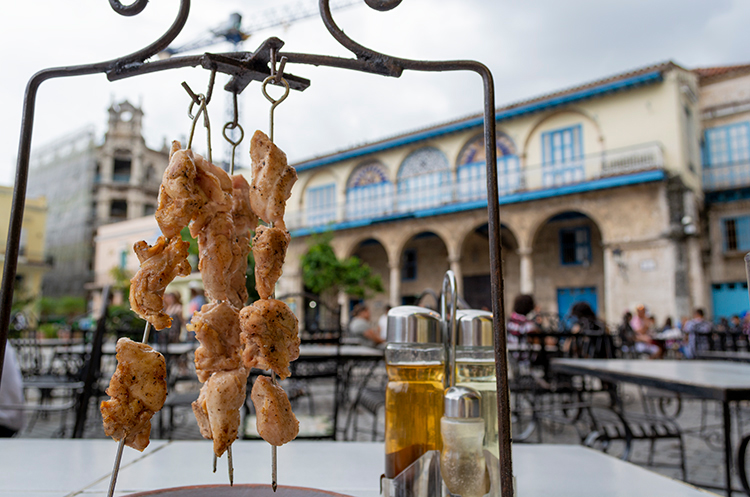 The Plaza Vieja is an urban, tourist-oriented location. Restaurants line the edges of the open square making a great stop for any hungry traveller. I chose to visit Factoria Plaza Vieja and spoke to Frank, one of the servers who has worked at the state-run restaurant for seven years. Many of the dinner options they offer are prepared on either the barbecue or grill and are locally sourced. They serve a variety of beers imported from Salm Brothers in Austria. He suggested I try the chicken skewers and two days later I returned to give it a shot. The display of food, as well as the taste and service was exceptional (the waiter even helped me move my dinner inside when it began to rain). I left with a full stomach and a smile on my face. 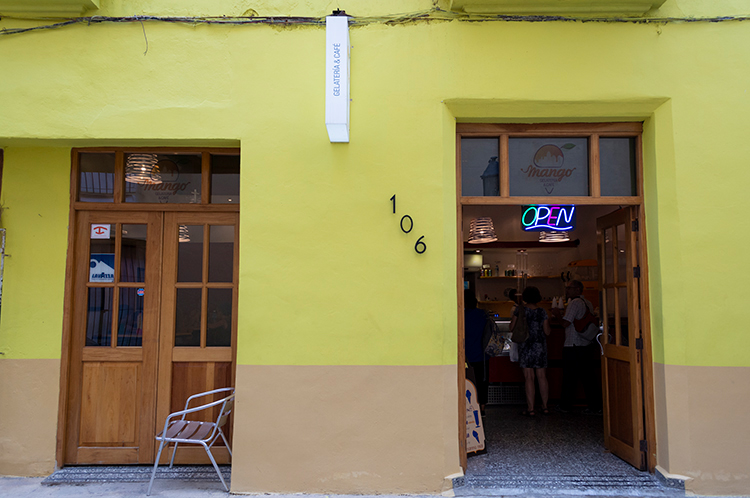 There is no better way to end the journey than by stopping at Mango Geleteria & Cafe, a local ice cream shop just outside Plaza Vieja that has been in business for thirteen months. The supervisor Fidel informed me that “the flavors are from local places; the market.” While some options are expected to change seasonally, he let me know I could always expect vanilla, chocolate, and mango. I chose the mani ice cream, a vanilla-based dessert with peanut toppings which was comparable in taste to a fresher rendition of Reese’s Peanut Butter Cups ice cream and only two CUC’s for a cone! The cooling dessert made the walk back immeasurably more delightful.

The expansive city of Havana is packed with fascinating history, rich culture, and delicious dining. It can be overwhelming and challenging to navigate the city and find spots to visit. But there are few better ways to get the most out of a lovely stay in the capital city of Cuba than to visit its iconic plazas. Being within such close walking distance makes these destinations a simple yet enriching option when touring, and in a place so complex and extraordinary, who wouldn’t appreciate some simplicity?