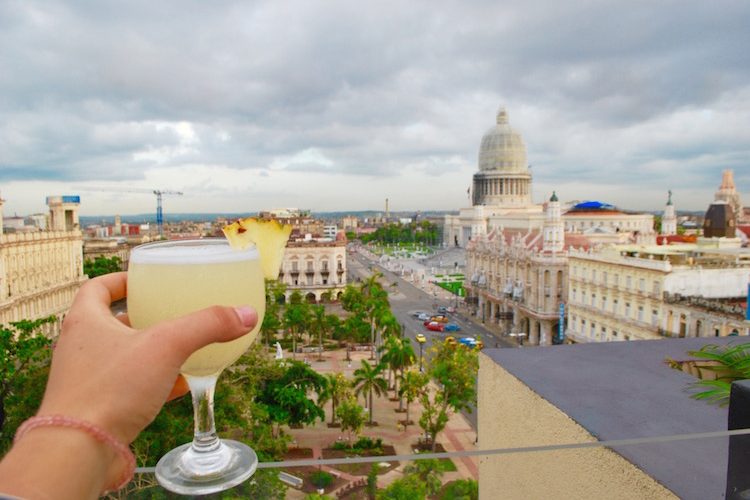 Escaping the humidity of Havana in the summer can be one of the most challenging parts of traveling to this otherwise tropical paradise. Tourists from all over the world come to experience the vibrancy of Havana’s bustling streets, but the grueling heat can get in the way of even the most ambitious traveler’s itinerary.

Whether it’s walking the colorful streets by foot or cruising in one of the classic cars, summer in Havana has even the most determined tourists gasping for a breath of fresh air. The streets of the center are packed with culture in the form of spontaneous music performances and bright buildings, but realistically some sidewalks can be quite unkempt and walking around in sandals will have your feet blackened in no time.

When you are ready for a break from mucky streets and heavy, hot air, slip into one of Havana’s hotels or rooftop restaurants for a cool breeze and a relaxing cocktail to recharge and take in some of the most stunning views this enchanting city has to offer. 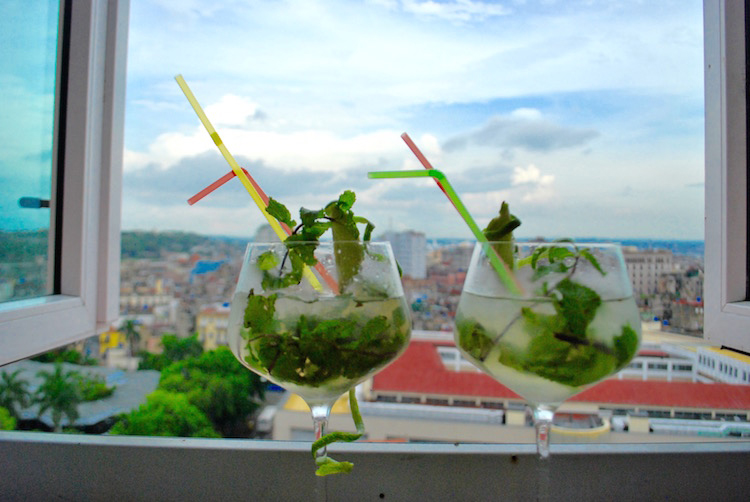 An excellent view is provided at Hotel Sevilla which is a favorite rooftop getaway for visitors and locals alike. Since its founding in 1908, the hotel has added floors and been renovated many times, continuing to modernize its aesthetic architecture catering to mostly European tourists.

But this hotel is more than just a rooftop view, according to the establishment’s historian, Paul Nougués, Hotel Sevilla “is one of the oldest hotels in Havana and has a lot of history with big people like Al Capone and was run by the Mafia”. The staff is young and professional, but also willing to give recommendations on where to go out dancing or have a spectacular dinner in the nearby area. 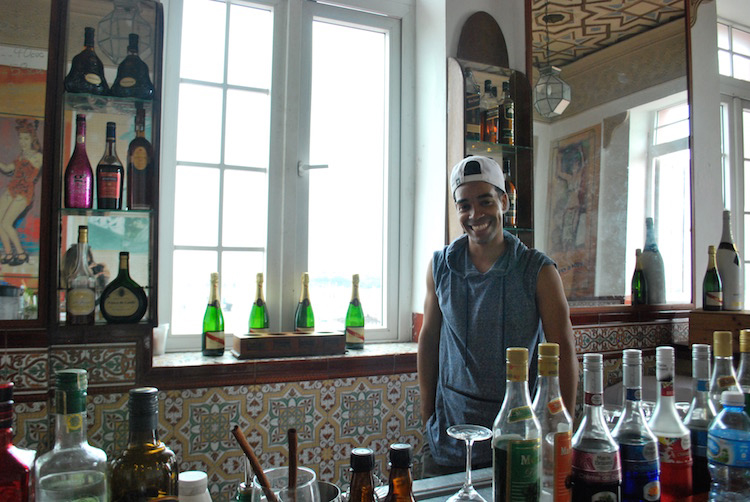 One can sit here and enjoy the most exquisite mojito in all of Cuba while looking out west towards the Atlantic Ocean through glass-paned windows and chatting with the hotel’s amiable employees. Visitors can also see the rooftops of museums nearby such as the Baccardi Museum, and The Fine Arts Museum. Another one of this bar’s specialties is the impeccable alcapone made with coffee liquer and rum. The hotel also offers breakfast buffets, dinner and various live music performances- from classic salsa to opera -with a view, of course. 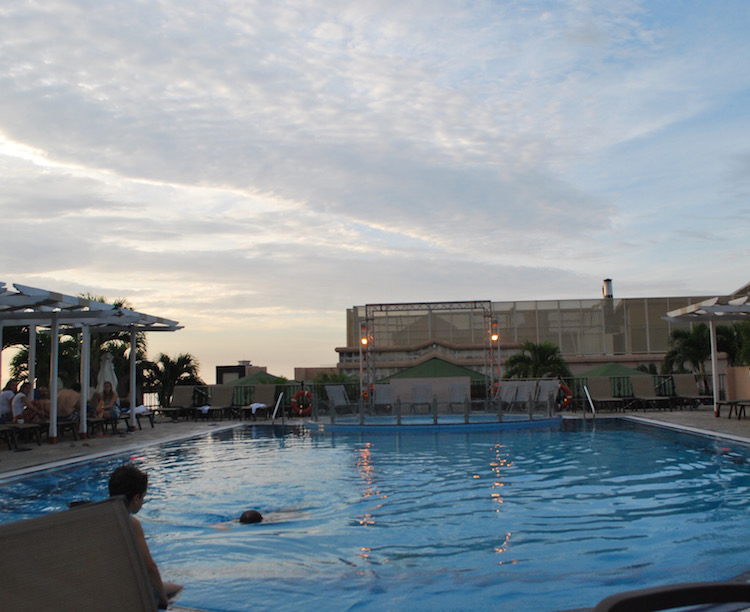 Further along Paseo de Prado, the city’s main avenue, there is another bar with impressive scenery atop the Hotel Parque Central. Here a friendly receptionist will ask for a photo copy of your identification before directing a visitor to the eighth floor of the exceptional rooftop poolside bar. Cuban locals can be spotted enjoying a cigar and a drink while guests swim, relax and take in the stunning view from the steaming Jacuzzi.

Maribel Quirche is a waitress who has been working at the hotel for five years and is proud to announce that “we offer WIFI throughout the hotel and even on the roof, although like the rest of Havana, the signal can be weak at times. We also offer rooms with WIFI that are more expensive, going for about 700 CUC a night”. From the panoramic lookout of north and south Havana, she boasts that the hotel is centrally located with a view of el Gran Teatro de Habana. The highlight of this view is by far the tropical greenery seen in the adjoining Parque Central which has been used before and after the 1959 Cuban Revolution as a place for locals to congregate, gossip and plot political tactics. 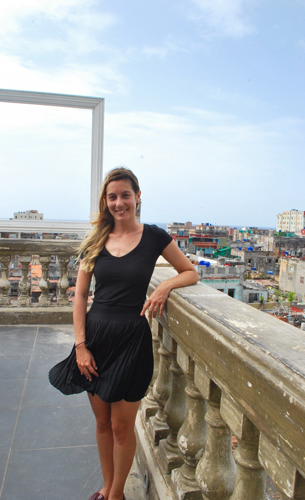 A ten-minute walk away in the gritty but surprisingly safe Centro neighborhood is another one of the most enchanting rooftop views that Havana has to offer, La Guarida. The small golden sign announcing the restaurant is easy to miss, but as you walk into the building you will soon understand why pop icons like Beyoncé, Rihanna and Madonna are drawn to celebrate and shoot at this famed eatery and rooftop bar. Although today the restaurant bar is known for attracting celebrities and being the venue for glamorous photo shoots, the roots of the establishment are actually quite humble.

In Spanish, this type of venue is known as a paladar which means that it was originally someone’s home that in this case the owner, Enrique Nuñez, converted into a restaurant after the famous Cuban film “Fresa y Chocolate” was shot there in 1994. Since then, there have been many restorations as Nuñez is constantly reimagining. 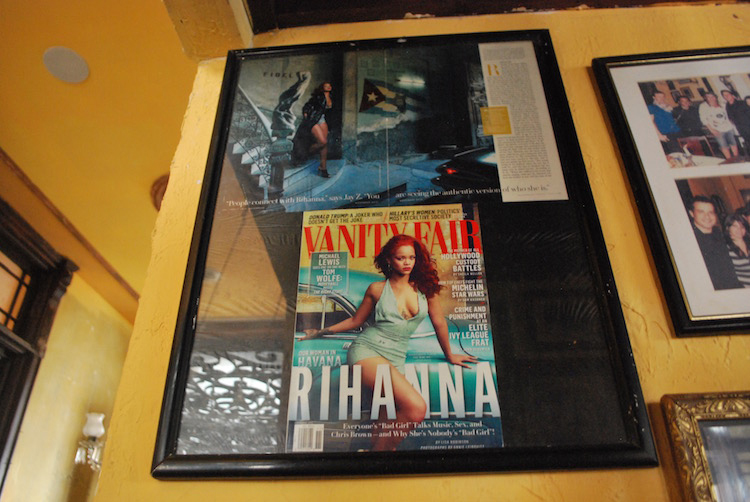 “He puts so much love into this place because it’s not only his business, but his home,” explains public relations representative Greten Ventura. The building has four floors, starting from the second floor, and walking up the grand spiral staircase, one will recognize the terrace where Rihanna was featured on Vanity Fair’s cover. Up the staircase, there is an exclusive dining room where one must call in advance for a reservation. Ventura explains that people make reservations weeks and even months in advance, as well as rent the rooftop for private events. 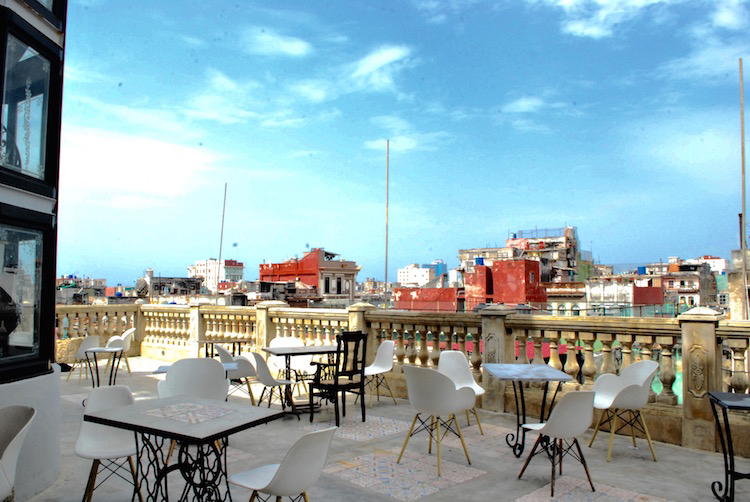 Without a reservation, one is welcome to head straight up to the third floor where there are two different rooftop bars, the first with a famous frame looking over the beautiful Atlantic, and the other has string lights that illuminate the view of the capital, the Hotel Havana Libre and the stunning white church in the distance called La Iglesia de Reina.

Cedric, the charming bartender, explains that “the second rooftop area is currently being renovated and will be ready soon” and that “people come from all over to take pictures in the famous frame of the Atlantic.” For the most breathtaking view of the surrounding area, head up the last spiral staircase to find a smaller and more private terrace perfect for gathering in groups to enjoy creative cocktails. 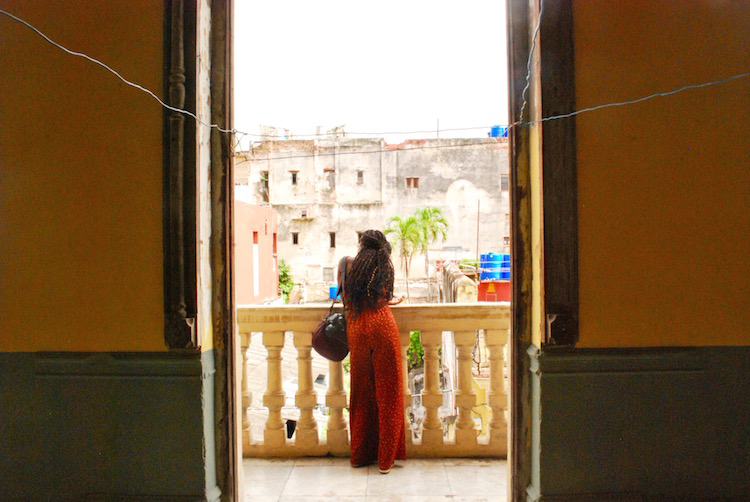 The rooftop bar was founded recently and is sponsored by Havana’s most prestigious liquor company, Havana Club, which sent expertly trained bartenders from the United Kingdom. One of the most tasteful cocktails is their signature drink, La Mansión, which is a frozen cocktail that Cedric explains is named after what the neighbors call this stunning building. It is made with liquid sugar, lime, pineapple, peach jam, Havana Club 7 and topped off with mint leaves for a sweet and refreshing taste.

Whether one comes to Havana for a couple of days or for a longer stay, the views from these hidden gems are a great place to rest, relax and cool off while taking spectacular photos and, if looking to connect, even get a WIFI signal if you’re lucky.