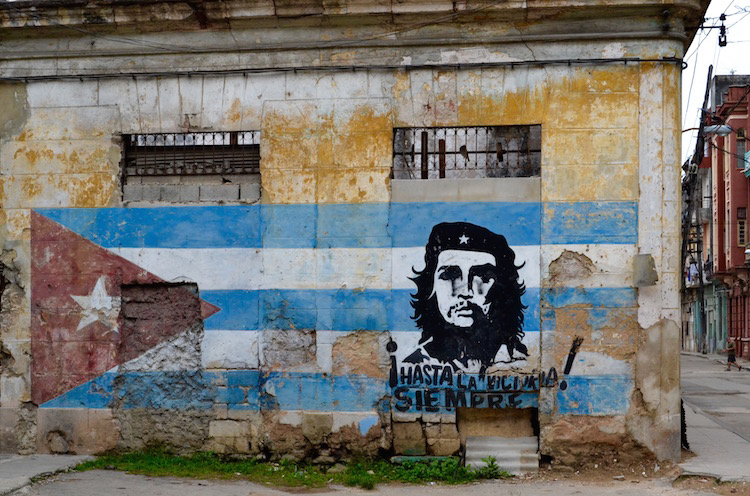 Photographing the Streets of Havana, Pros Say Be Bold and Shameless

“Watch out!” yelled my friend Deirdre as she yanked on my shirt sleeve. Not even a second later a blue 1950’s Chevy truck that filled the entire width of the street zoomed by us with no regard for a speed limit of any kind. We were on the breathtaking streets of Havana, Cuba, on a photography tour lead by veteran Irish photographer Desmond Boylan, 53. Boylan, who has traveled the world photographing wars, disasters, and politics, guided us through the never-ending streets of Central Havana as we discovered all there was to capture.

Capturing all of the beauty, mystery and soul of Havana in one picture is nearly impossible, but you should not let that stop you from trying. Whether you are traveling to Havana specifically for photography or not, the city offers the perfect environment for creating and capturing unforgettable memories. 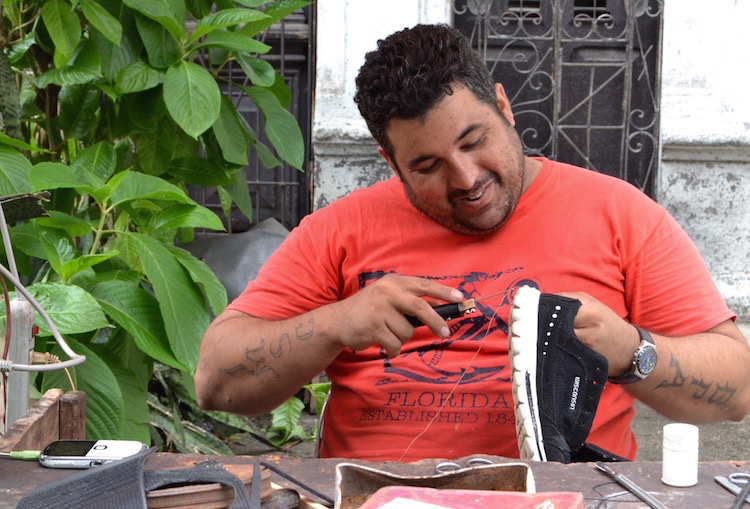 As we navigated through the narrow streets of Santo Cristo, a neighborhood south of Old Havana, a middle-aged man waved me over to a table where his friend was sewing shoes. The cobbler in a bright red shirt sat at a table with a sign announcing his profession: zapatero. He was surrounded by newly crafted footwear as he was threading a needle through the sole of a black sneaker. The man in the red shirt sat with a large grin across his face as photography students surrounded him with their cameras. As we all graciously thanked the two men for allowing us to photograph them in our broken Spanish, the men grinned, nodded back to us and thanked us in turn for taking their picture. 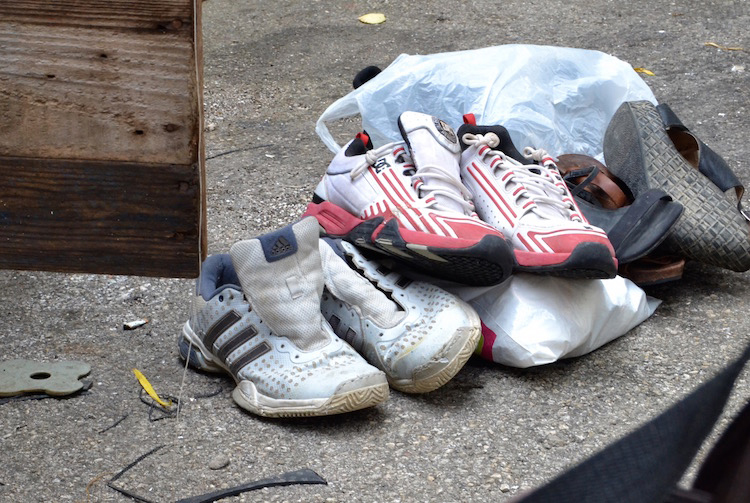 This experience is not rare; the Cuban people are the most friendly, curious and easy-going people I have ever met. Habaneros are now very used to tourists wandering through the streets taking pictures, and many even ask to have their pictures taken.

“Here it is very different, people like it [and] 99 percent of the people here are very nice, they are just very human,” Boylan expressed with a grin as he reminisced about his many experiences photographing the Cuban people. Boylan has lived in Cuba for almost ten years, after he settled  down following a long career with the Reuters news agency. Boylan worked as chief photographer in India revealing areas of extreme poverty and poor health conditions, as well as exposing rampant child labor. Despite traveling to dozens of countries and hundreds of different cities, Boylan said his favorite country and place to be is Cuba. He ended up in Havana after Fidel Castro persuaded him to visit while they were in South Africa at Nelson Mandela’s inauguration. After a life of hectic traveling, Boylan said he loves being in Cuba capturing the joys and traditions of everyday life.

“Relax. Just relax is the number one thing,” Boylan advised for those who wish to come to Havana and master the art of street photography. Boylan also said that the best thing he can do is wander, loiter, and get lost in the beauty of the streets. “Just hang around! Walk slowly and be a fly on the wall or talk with the people,” he quipped about his journeys through the streets of Havana. Boylan also recommended bringing and drinking lots of water, as well as walking in the shade. Most importantly, he stressed the value of being patient and waiting for the right scene to play out in front of you. 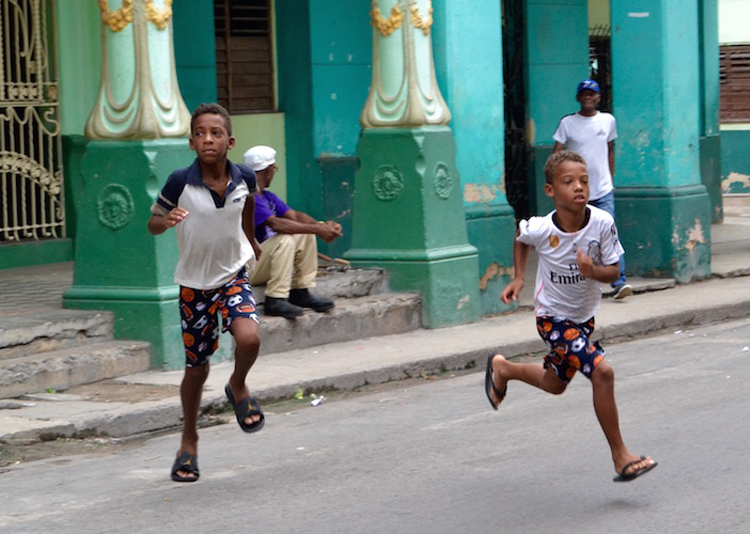 Boylan’s last piece of advice about being patient rather than trying to force a photograph could not have been more valuable. While on our walking tour, I was hanging around a street corner watching the locals go about their daily routine. Just as I was thinking about moving locations, I heard two young boys yelling and running together. Right as I turned my head, I had time to capture the two boys wearing matching shorts sprinting across the street together as if they were racing to a finish line. Just like the flash of a camera, the two boys were gone in an instant. Had I decided to move locations, I would have missed this perfect moment in time as the two boys zoomed by me. Finding a specific street or a certain spot in a neighborhood to commit to staying at for an extended period of time is an extremely helpful tool in capturing a great photograph in Havana.

Kristina Garcia is a freelance photographer who traveled to Cuba to expand on her work back in her home city of Phoenix, Arizona, where she likes to photograph minority groups. Garcia’s mother and grandfather are Cuban, and she said that she felt a need to travel here herself to feel a connection with her heritage. “It felt important and connected to my work back home,” Garcia said, humbled by the opportunity to give minorities a voice. “I like to shoot women, especially women of color, and the LGBTQ community. I try to bring awareness to these groups, and give them a sense of power.” 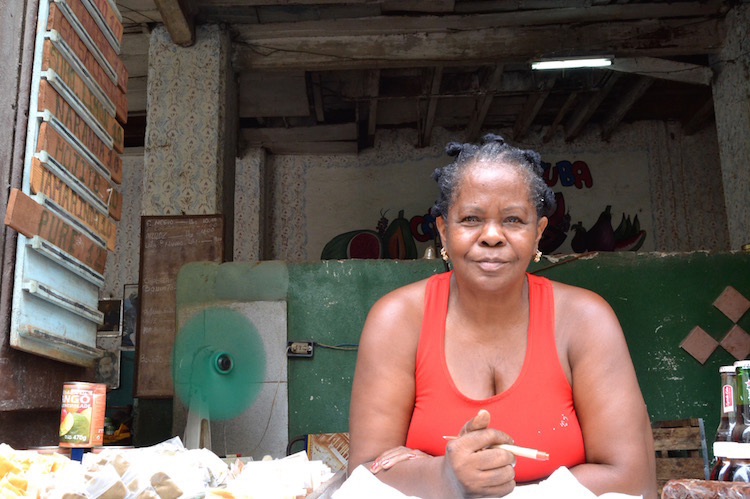 Wandering through the streets of Central Havana on her own every day is what Garcia said has been her biggest tool. “People have been so approachable and interested in conversation. They just want to know about you and where you are from – they are all so curious,” Garcia recalled as she described one of her first interactions with a Cuban woman. On her second day here, Garcia asked a woman on the street if she could take her photo, and she said yes and promptly invited her into her home. After spending several hours with this woman, Garcia offered her some jewelry to thank her for the hospitality, and the woman was blown away at her gracious offer.

“I knew I might have a hard time, so I brought a bunch of jewelry to give to the women as a bit of an exchange, or a thank you for letting me photograph them,” Garcia explained, adding that having a small gift or way to say thank you was a helpful way to put the women she was photographing at ease. Garcia is fluent in Spanish, and said that being able to have conversations with the Cuban people helped to break down the barrier that so often exists between a local and an intruder. Although speaking the local language is not a requirement to travel to Cuba, it is very helpful to know enough to communicate with the locals, or at least know a few key phrases.

Garcia suggested photographers always have their cameras with them and kept on, because the streets are always moving, and new things are constantly happening – you would not want to miss it. “Just be fearless and talk with the people,” Garcia advised.

As both Boylan and Garcia warned, Havana street photography is not for the shy; you must be passionate, persistent, outgoing, and attentive. But most importantly, as Boylan puts it, “To be a photographer, you must be sin verguenza [without shame].”