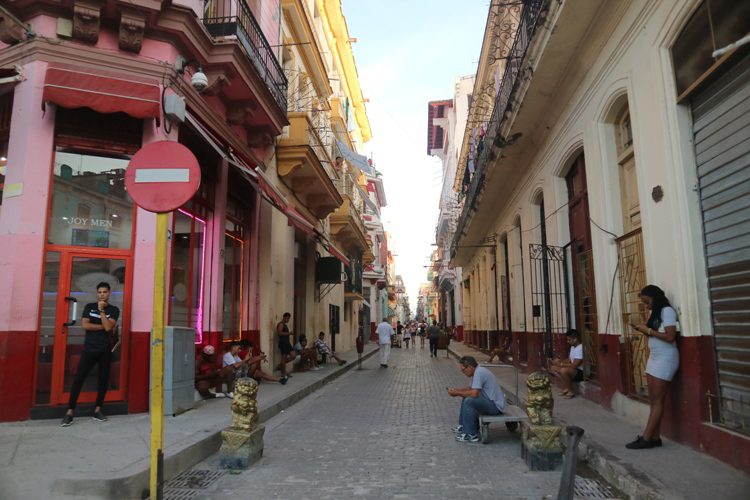 Walking past red lanterns, stone lions, Chinese-language street signs, a Confucius statue and a traditional Chinese arch four lanes wide, for one moment you might not think you are in the Cuban capital of Havana. However, looking around you find Cubans sitting under Internet hotspots using their phones, chatting with their neighbors, and tourists walking by and taking photos, which gives this part of the city a vibe similar to many others.

In Barrio Chino, or Chinatown, centered around Calle Zanja and Calle Dragones in Central Havana, you might need to look beneath the surface. Traveling back through time, you would be standing in the heart of the largest Chinatown in the Americas, and the bustling scenes of Chinese immigrants and their businesses would be overwhelming. 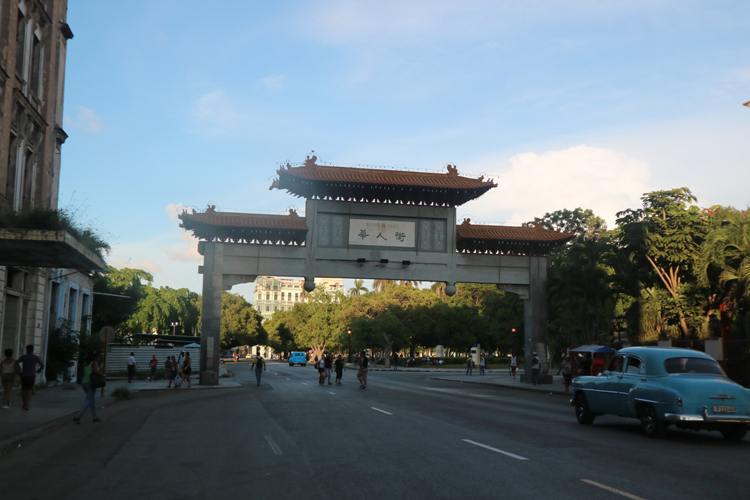 On June 3, 1847, a ship with 206 Chinese arrived at Havana’s port and ten days later another 365 immigrants stepped ashore. As indentured labor, they worked on sugar plantations to replace newly-freed slaves who had been brought over from Africa. When their eight-year contract was over, many of the Chinese settled in Havana.

At its peak between 1847 and 1874, there were 140,000 Chinese living in Cuba, or a tenth of the Cuban population, making it the country with the most Chinese people in the Americas. They opened up shops, restaurants, and cinemas, and Chinatown covered a much larger region that extended towards the city’s seafront.

A century and a half have passed since the height of Chinese immigration and very few of the older immigrants can still be found here in Chinatown. As a martial arts school on Calle Manrique begins playing its daily practice music, in the retirement home just across the street, two elderly Chinese are sitting in the lounge, silently watching TV.

One of them is Guillermo Chiu, who can still write his full Chinese name in Chinese characters despite his 85 years of age and 66 years living in Cuba, but only speaks with me in Spanish. He married in Cuba, but there is now no family to take care of him. He hardly ever leaves the retirement home, which also houses another six elderly Chinese, and while we talk, his companion, who is also over 80, only sits in the corner and smiles and gestures occasionally.

Although the people living in Chinatown are now almost all Cubans, remains of Chinese-style buildings can still be seen, and a lot of the locally-owned shops still bear Chinese names. What’s more, newer generations of Chinese immigrants, though few, have also made their way here, helping Chinatown to rejuvenate. In a small alley connecting Calle San Nicolas and Zanja, you can find five Chinese restaurants, all of which were licensed by the Cuban government in the 1990s in an effort to strengthen Cuban-Chinese relations. 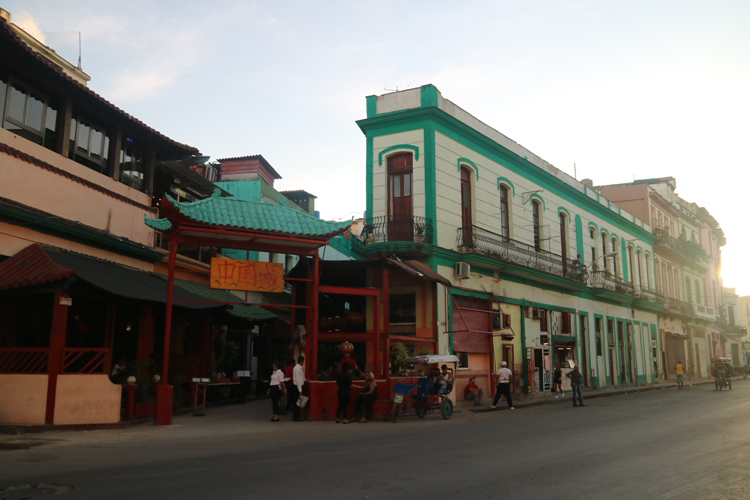 Located at one end of the alley, Tien Tan, or Temple of the Sky, is the only restaurant that employs Chinese chefs and has authentic Chinese food. Chef Luo Shugui sits at a table in front of the restaurant smoking a cigar. In the afternoon and early evening during the not so busy hours, most of the time he sits alone, but when a Chinese person passes by, he will surely strike up a conversation.

After touring Latin America 23 years ago, Luo found out that he liked Cuba best and decided to stay. “It was safe and tranquil, there were not many Chinese restaurants and so I thought it had great business potential.” Today, Cuba can still be difficult for private business, but Luo never regrets his choice of coming here.

“Here there is so little pressure compared to China, and when I was back, I felt that there was a gap in communicating with the people I met.” However, in Cuba he finds it easy to connect with the locals, and drinking a beer and conversing with a random Cuba on the beach is a normal thing for him to do.

“When I first came, there were more than 2,000 Chinese living here, but now in the entire country there are only something like more than 100.” Due to the unpromising economic status in Cuba, a large number of Chinese emigrated to other countries. The houses where they once lived became government property and were handed over to the poor. With the passage of time descendants of the Chinese immigrants have now spread out all over the city and over time mixed more with the local people. 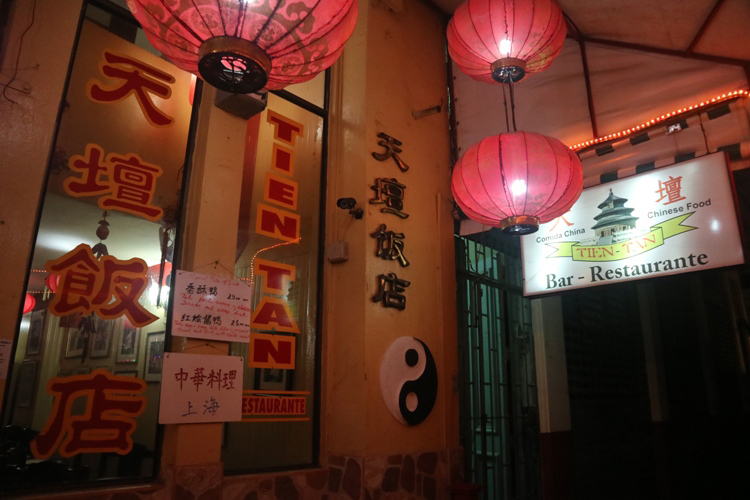 Walking out of the alley into Calle Nicolas, you will immediately see a grand, four-floor white building with bright red columns. The small characters on the window say “Confucius Institute, University of Havana.” First established in 2000 on the university campus, the institute moved to its current site in Chinatown four years ago when more space was needed.

Sitting in front of the institute, three young people were waiting for their Chinese teacher to arrive. Teo, 22, attends the adult Chinese class that takes place two times a week, whereas Miguel and Elizabeth, still in middle and high school, respectively, go to the children and teenager’s class that meets only once a week. “We are on summer vacation,” Teo tells me. “Learning Chinese gives me something to do, and it’s helpful.”

I later learned from Lucila, 55, the janitor of the institute, that currently there are about 400 students registered at the school and anyone with Cuban citizenship can register for free. The Chinese government sends teachers that circulate every two years and pays them. Apart from the 14 Chinese teachers, there are also six to seven Cuban teachers who are mostly graduates from the institute. Graduating with a Chinese degree also allows many of them to work in Chinese companies, as exemplified by Luis and Leo, two young people who speak Chinese relatively well who I separately ran into while walking in Havana.

Leo proudly tells me that he works in the only company that produces bicycles in Cuba. And Luis says with frustration that he’s now out of work and it’s hard for him to find a chance to practice his Chinese. On the streets of Havana I often hear people calling me chinita but it is also not rare to be greeted by ni hao. 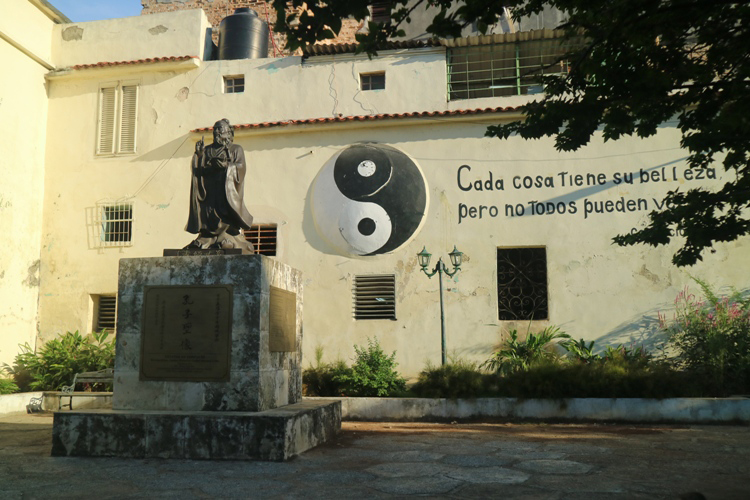 Confucius Park with quote “Everything has its beauty, but not everyone can see it” | Zhen Fu

On Calle Zanja there is a small, triangular-shaped Confucius park with plants and patches of grass, and children from the neighborhood find it an ideal playground. About a mile northwest of Chinatown, the monument to the Chinese soldiers that fought for the independence of Cuba speaks of an indelible contribution of the Chinese immigrants, and the Chinese cemetery two miles southwest is still visited by descendants of the dead and tourists alike.

At night, the small alley in Chinatown is busier than ever. Visitors, Chinese, western, Cubans living nearby and those coming from other provinces can all find their favorite Chinese or Chinese-Cuban fusion food. The Chinatown that we see now is clearly different from what it has been, but this part of Havana is and will be a hotspot for unique cuisine, culture, and history.