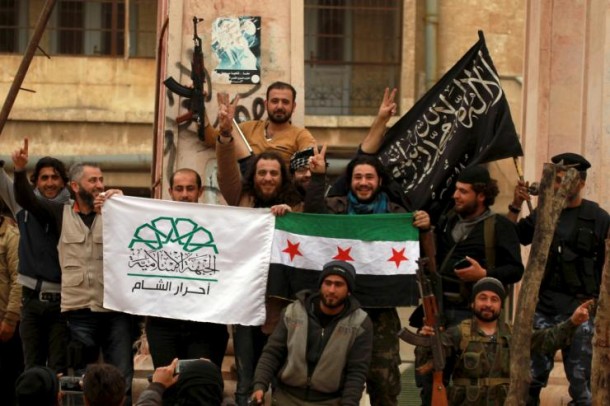 A massacred land. The popular protests in 2011 against the Assad regime turned into a tragic scenario of country-wide instability, fuelled by the increasing influence of foreign actors through the large-scale use of religious radicalization for political purposes.

It has been calculated that more than 20 thousands fighters from over 80 countries are active on the Syrian territory. This factor has irremediably altered the country’s internal social and political unrest, provoking unimaginable consequences for the whole region. Daech is not the only monster. It is just the most recent (and well-publicised) fanatical group spreading terror in the country.

Syria is literally being made into pieces. The country’s political tradition, deeply rooted in secularism, has been a model of millenarian peaceful coexistence of people and faiths. In the last 5 years it has been violently transformed in a bloody mosaic of opposite groups, where ethnic and religious affiliations prevail. There are no updated reliable statistics on the number of deaths. The UN officially stopped updating its statistics in 2014, with the last available data recording 200 thousands deaths. The number of refugees has exceeded 4.500 million people.

Since the outbreak of the crisis new armed factions have born, others have disappeared or melted to other groups. The pattern of local alliances has been a fast-changing feature, reflecting the play of forces in different local contexts and phases of the conflict, as well as the trial of strengths in the regional landscape.

The current fragmented landscape reflects an ongoing process of territorial division on confessional basis, with the consent of all regional and international actors involved in the war, and with the approval of some national actors. Even the UN efforts for a political solution of the conflict seemed to support the idea that the end of hostilities must now pass through the creation of ethnic-confessional cantons.

The reality on the ground differs remarkably from the official discourse of the so-called “international community” – i. e. Western propaganda. NATO countries have arbitrarily drawn a line between moderate rebels and terrorist groups. A consolidated, long-term strategy to pursue their own interests in the region, already used in other theatres of war in the past. And each time, it has been enthusiastically promoted by the official media discourse.

Let’s take for example the Free Syrian Army (FSA): a Sunni militia officially born in July 2011 by a group of defecting Syrian Army officers and backed logistically and financially by US, France, Turkey, Saudi Arabia and Qatar. These fighters have been described as “moderate rebels” or “freedom fighters”, as a way to support a specific politically-biased narration of the conflict.

In 2013, a US senior military official, speaking on condition of anonymity, claimed that the extreme Islamist groups constituted “more than 50 percent” of the FSA rebel force, and that it was “growing by the day“. According to many observers, FSA has become a loose umbrella organisation made up of different militia groups, most of them extremists, acting autonomously in the Syrian territory. Today Russia claims that the FSA is just an empty box with no real existence on the ground, but willing to have a political role in the conflict resolution. 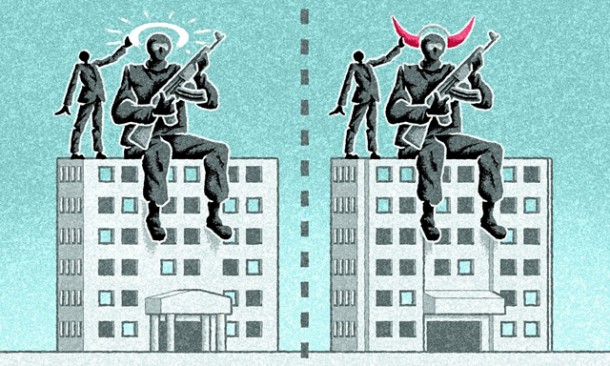 Many FSA brigades joined the Islamic Front, a Sunni extremist group backed by Saudi Arabia, embracing the Salafi ideology and willing to impose Sharia. One of the most powerful factions of the Islamic Front is Jaysh al-Islam. His leader Zahran Alloush declared in the past that Alawites are “more infidel than Jews and Christians”. During the Ramadan in 2013 he was calling for the extermination of Shias and Alawites from the Levant from one of his twitter accounts, now suspended. One of the several war crimes committed by the Islamic Front and Jaysh al-Islam is the Adra massacre.

Alloush has been killed by the Syrian Army last December, 25. In May 2015, he was reiterating his call for violence against Shia, Alawites, and Iranians by the names “Rafidi”, “Nusayri”, and “Majusi” in this speech held in Ghouta. His father, Mohammed Alloush, sat in the latest “peace talks” in the opposition’s High Negotiations Committee backed by Saudi Arabia. The talks have floundered after a few days of activities.

Another example: Al Nusra, also known as the Al-Qaeda in Syria, is a Sunni extremist militia fighting the Syrian government and responsible for several massacres of civilians. It has massively received financial support and arms by US and France.

(Al Nusra is doing a good job against Assad, therefore it is difficult to disown them). 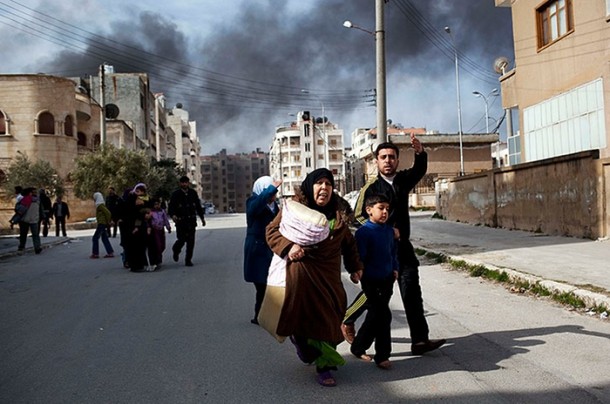 A family escapes from the fierce fighting in Idlib
Photograph: Rodrigo Abd/AP

Today, the US continues its quest for “moderate rebels” to fight against Daech and Assad, which implies supporting these groups financially and logistically. However, all these terrorists are in strategic alliances with Daech on the ground.