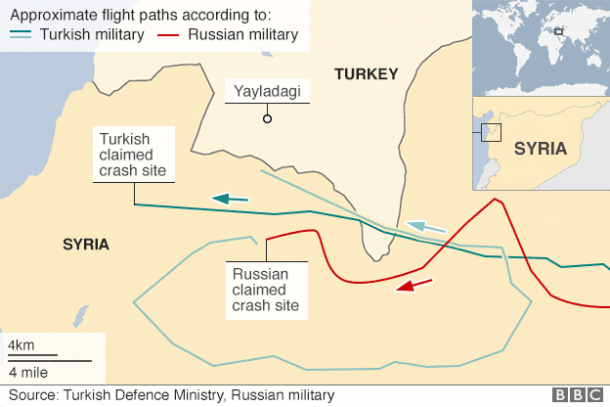 Syria. The future of Turkish-Russian relations is a dire one to say the least and definitely on shaky grounds ever since Turkey shot down a Russian Su-24 aircraft in the Turkey-Syria border area on November 24.

It is the first time a Russian aircraft was crashed in Syria since Moscow launched its air strikes against opponents of the al-Assad regime in late September this year.

According to Turkish President Erdogen, two aircrafts of unknown nationality approached Turkish space the night of November 24. Disregarding the 10 warnings to distance themselves, both planes entered Turkish airspace for a short time of 17 seconds. The first air craft left Turkey, while the second one was fired at while still in Turkish territory and crashed on the Syrian side.

Russian’s story differs. The Su-24 was in Syrian territory when it was hit – 1km away from Turkish territory. The Russian Defense Ministry said it did not violate Turkish airspace and it did not receive any warnings – a statement confirmed by the pilot who survived. Moreover, Russian air force commander Bundarev said Russian and Syrian radar data pointed towards an ambush by the two Turkish F-16s.

The pilot and the navigator ejected as the air craft was falling down. Rebels from Syria’s ethnic Turkmen community opened fire at the crew as they were parachuting in Syrian territory. The pilot was dead when he landed and the navigator was later saved during a rescue mission.

Ever since the incident, Putin refuses to speak to Erdogen since the latter still has not apologized and refuses to do so. Erdogen, on the other hand, stated that “everyone should respect the right of Turkey to defend its borders” and noted that the actions were in line with the new rules of engagement adopted after Syria shot down a Turkish jet in 2012 which state that all ‘elements’ approaching from Syria are considered to be an enemy threat.

Russia is Turkey’s second most important trading partner, after Germany. Economic retaliation would have substantial and harmful impact on both countries.

Turkey is a top holiday destination for Russians – in 2014, 3.2 million Russians went there on vacation.

Turkey buys more than half of the gas it uses from Russia. In 2014, it became the second largest consumer of Russian gas, after Germany. Gas gets to Turkey via two routes: the BlueStream pipeline across the Black Sea; and the gas transportation corridor via Romania, Ukraine and Moldova. In December 2014, plans to transport 63bcm gas from Russia via Turkey and onto Europe (bypassing Ukraine) were announced, but have stalled.

Turkey imports nearly all the energy it consumes. In 2012, the two countries signed a multi-billion dollar deal for a power plant to be built by the Russian company Atomstroyexport in Mersin, Turkey. This would be Russia’s first built and owned foreign plant. The expected costs of $20 billion were to be covered by Russia, but to be won back through electricity sales. The plant is now under construction and Russia has already invested $3 billion in it. However, in October 2015, Turkish authorities said Russia’s military activities in Syria could threaten its future involvement in the project.

There are around 100 Turkish companies working in Russia. Turkish firms have built more than 800 projects in Russia since the end of 1980s; and Turkish investors have stakes in many brands sold in the Russian market (Tevolina shoes, Gloria Jeans, etc.) as well as in the food and chemical industries.

Russia suspended the reciprocal visa-free regime with Turkey starting 1 January 2016. It also banned charter flights to and from Turkey. Travel firms have been told not to sell Turkish holiday gift packs and Russians have been warned not to travel to Turkey.

Russia has suspended talks with Turkey on TurkStream – a major gas pipeline project in the Black Sea that was designed to boost Russian gas exports to Turkey. Russia began building part of it in May and it would have replaced the SouthStream pipeline.

On November 28, Putin signed a decree to ban or limit imports from Turkey; the work of Turkish companies in Russia; and any Turkish nationals working for Russian companies. The government said fruits and vegetables will be the main food imports to be restricted, while food inspections have already been tightened. In addition to bans on agricultural imports, Russia even imposed bans on Russian soccer teams buying Turkish players. However, Putin repeatedly said that trade bans are only the beginning of Russian retaliation strategy towards Turkey.

Speaking at international talks on climate change in Paris, Putin called the downing of the plane a huge mistake and one inspired by Turkish desire to protect its oil trade with the IS. The Russian President further accused Turkey of providing the jihadist group with significant funding by allowing large quantities of oil to enter Turkey from IS-held areas in Syria.

On November 31 in Paris Putin stated: “We have every reason to think that the decision to shoot down our plane was dictated by the desire to protect the oil supply lines to Turkish territory.” With this, he implied that Turkey is not only complicit in smuggling oil from IS-controlled area, but also so heavily committed to this trade that was willing to provoke an international crisis to protect it.

Turkey has denied any ties to the IS and is part of a US-led coalition air strikes against the IS. In a tit-for-tat war of words, Erdogen accused Putin of doing the exact same thing – being involved in the illegal oil trade with the IS.

Russia’s and Turkey’s involvement in the Syrian conflict

Russia has been a strong supporter of al-Assad and his regime’s survival is critical to maintaining Putin’s interests in Syria. Moscow wants to protect a key naval facility which it leases at the Syrian port of Tartous and is Russia’s only Mediterranean base for its Black Sea fleet; and has forces at an air base in Latakia. To this end, Moscow has blocked key resolutions critical to al-Assad at the UNSC and has continually supplied his military with weapons despite international criticism.

Russia’s intervention from late September this year was a game-changer for al-Assad. With this Moscow became directly involved in the Syrian conflict and showed it will not let his regime to collapse. This is the first time Russian military operation beyond the boundaries of the Soviet Union since the end of the Cold War.

Russia has been continually saying that it is targeting only terrorists – above all, ISIS jihadists who control areas in the Eastern and Northern part – but its strikes have mainly hit Western-backed rebels. This suggests that Russian fundamental aim is to relieve pressure on al-Assad’s forces and that its list of targets go well beyond those exclusively linked to the IS. Experts suspect that Russia is trying to eliminate the immediate threat to the Syrian army, leaving no sensible opposition to Assad, while legitimizing its air strikes as part of an anti-IS coalition.

Turkey, on the other hand, is a strong critic of al-Assad and supports the Syrian opposition instead. Its policy of allowing rebel fighters, arms shipments and refugees to pass through its territory has been exploited by foreign fighters wanting to join the IS. As a response to an IS bomb attack in July 2015, Turkey agreed to let the US-led coalition against the IS to use its air bases for strikes on Syria.

Up until this point (August 2015), Turkey was reluctant to play an active role in the anti-IS coalition and was accused of turning a blind eye to jihadists crossing to Syria. However, Turkish President Erdogen has categorically denied his involvement in oil smuggling from IS-controlled area in Syria and from financing the jihadist group.

Smuggling of oil and petroleum products from Syria into Turkey has been going on for a long time and, with the civil war, this trade has evolved even more. In 2014, IS took a great part of the crude production and refining business along the Eupherates river valley (1/3 of Syria’s pre-conflict oil capacity).

It is highly likely that Turkish businessman, customs officials and intelligence agents are among the people implicated, but the scale is tiny compared to Turkey’s own energy economy. Moreover, considering that Turkey buys 30% of its oil from Russia, and looking at the plane crash from an oil-interest perspective, it would have been more logical for Turkey not to shoot down the SU-24 Russian air craft.