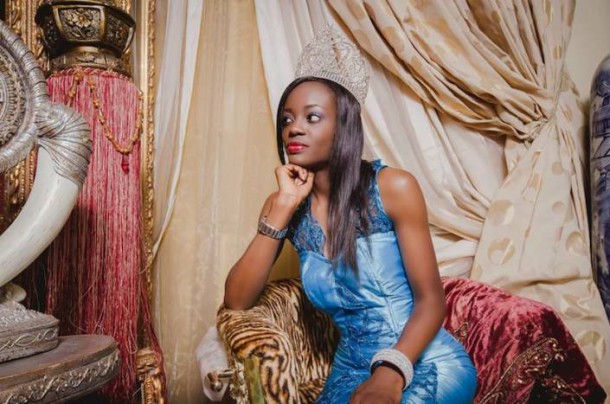 Miss ECOWAS Speaks Out for #BringBackOurGirls

NIGERIA. April 23, 2014, was not an ordinary day for most of Nigerians. It was a day of transformation. Transformation in Nigeria’s socio-political history. This was the day when the #BringBackOurGirls campaign was first launched. It was the day when the world joined Nigeria with a hashtag to raise the voice against human dignity. The violation of fundamental human right – the right to life and safety. The violation of right to education.

Thus far, the campaign has involved renowned personalities from around world, including Michelle Obama, David Cameron and Yousafzai Malala.

In an exclusive interview, ROOSTERGNN spoke with Ms. Hyeladzirra Banu, Miss ECOWAS (Economic Community of West African States) Peace Ambassador 2012 at the Miss ECOWAS Peace Pageant and a CEO and Founder of the DorcaSapel Foundation, through which she executes development projects that offer practical solutions to challenges in the region. Ms. Hyeladzirra holds honours degrees in International Relations, Political Science, and Communication. She is proudly Nigerian, and an avid contributor to international peace and human development. We asked Ms. Hyeladzirra to shed light on #BringBackOurGirls campaign from Nigeria’s perspective.

How do you think this campaign has transformed young Nigerians attitude towards right to education?

Ms. Hyeladzirra: Nigeria, a country with over 177 million people—60 per cent of them under 24 years old—represents the heartbeat of Africa, boasting of an economy worth over $500 billion, a thriving communications and entertainment industry, and a budding banking and financial sector. Yet, despite the extensive opportunities that should exist Nigeria’s youth, unemployment, which persists at 25 per cent, breeds a source of disillusionment for Nigeria’s punctilious youth. Nigerian youth, —highly educated but without jobs, and left with little opportunities other than self-employment,— have felt sidelined by their government and by their country.

The same issue troubles the millennial generation around the globe. This has bred a general feeling of apathy and complacency toward political participation. However, April 23 highlighted a new epoch for young Nigerians as instigators for change. The #BringBackOurGirls movement reflected a new era, an avenue for political accountability motivated by Nigerian women and youth and purveyed by all Nigerians alike.

The #BringBackOurGirls Campaign, which was initiated by protests organized by Nigerian women, and catalyzed by Nigerian youth on Twitter, characterizes a united demand for political accountability from Nigerians across the board. The diverse citizens of this country with over 250 ethnic groups, 500 languages and various religious viewpoints have demanded that their leadership respond immediately to the needs of its citizens, beginning with the abysmal security situation, which has been in decline since 2009.

The decline of security in northern Nigeria began with the death of Mohammed Yusuf, leader of the group dubbed locally as Boko Haram, which loosely translates into “Western education is forbidden”. The group, officially known as “Jama’atu Ahlis Sunna Lidda’awati Wal-Jihad,” translates from Arabic into, “People Committed to the Propagation of the Prophet’s Teachings and Jihad”. Boko Haram has propelled violent attacks never before seen in the history of Nigeria. A few years ago, many Nigerians could not have imagined that such a group could operate in their country, yet the group continues to wreck havoc in the northeast region. Although the group’s aim is to promote its version Islam, most of its victims have, infact, been Muslims.

Have the currents of transformation towards education for women clashed with traditional religious ideologies?

Nigerians have never before been so united against religious extremism. Muslim and Christians alike have reacted in unison against Boko Haram in a manner unrivaled in the country’s history. Boko Haram remains a socio-economic and political symptom, and not an effect of religious (or ethnic) disparity. In sweeping simplifications of events, some foreign media have wrongfully reported the crisis as a clash between Muslim and Christian groups, or as ethnic (or “traibal”) conflict. This representation could not be more inaccurate. The united protest of all Nigerians against the menace of Boko Haram is testament to this fact. Prominent Northern and Islamic leaders such as the late Emir Ado Bayero, (may his soul rest in peace) have been vocal against religious extremism in the country. His disapproval of the group led to an assassination attempt on his life only last year. Nigeria’s citizens have also united against the extreme group. The attitude is compounded in this statement by civil servant Samail Garkuwa in the North-east:

“What else should we do? We have to do something … We are not politicians. We are not military, we do not have arms. We are just tired. Borno is the home of peace. We need that peace to return.”

Did the Nigerian government react too slowly to abduction by Boko Haram? Has international cooperation accelerated change for better?

With this unanimity against violence comes a push for accountability. Nigeria has not experienced mass political involvement toward its governance since protests sparked by the annulled elections of June 12, 1993. At that time, many Nigerian youths active today were yet unborn. It is this generation of Nigerian youths and women that lead this campaign for political accountability and social betterment.

Nigerians remain grateful that the world has joined in its campaign for socio-economic growth and political accountability. Because of the outcry of individuals from around the world, key countries such as the United States—which has largely sidelinedNigeria out of its recent foreign policy trajectory—have been forced to re-asses their stance on the country, sending assistance in terms of military expertise. Our Nigeria has come a long way since June 12. Our country has never been one to capitulate to any one ultimate ruler.

In studying our history, one will find that our country has steadily fought against imperious rule, be it in the form of an individual, or a group of individuals. Nigeria will always contain our political identity and we must ensure that we construct a society that we can live in. The #BringBackOurGirls campaign gives us an opportunity to do so. Let us not let this opportunity pass.