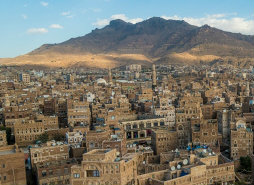 Where Is The End?

In order to explain current political disturbances in Yemen, one needs to look back to the very creation of opposition group – Houthi. This rebellious group of Shiites, lead by Abdumalik Houthi, has been trying to take control of the country since 2004. They have launched number of attacks in protest of unfairly represented government, majority of which were Sunnis.

Moving on to the most recent events in Yemen, Houthi, now being the strongest opposition group in the country, takes control of the capital Sanaa. United Nations responds immediately, demanding Houthi to withdraw their troops from cities. This conversation continues for several months until in January 2015, when the government proposes a new constitution, which is rejected by Houthis. The group takes over the capital. President Hadi and his supporters are forced to resign. This is when Islamic State comes in, carrying out its first major attacks- two suicide bombings, targeting Shia mosques. Saudi-led coalition of Arab States that does not approve Shiite opposition comes in as well with its airstrikes on Houthi targets. Iran, on the other hand, attempts to supply the Houthi rebels with weapons. The UN stated that Yemen is “on the verge of total collapse”. The question, therefore, is what can be done in order to prevent it? Where is the end?

Yemen conflict is not just Yemen’s anymore. Saudi-led coalition of Arab States is involved, Iran tries to financially support the rebellion and even the United States has its ships right next to Yemen’s borders, which Obama refers to as “the freedom of navigation”. This only adds sparks to already burning fire of Yemen’s revolution, worsening the overall situation. The United Nations and Yemen opposition group cannot come to any possible resolution of the conflict, due to the listed above states intervening into the conflict, promoting their own personal interests. Thereby, the answer to the topic question above lies in one simple word- isolationism. Countries should stop this self-interested intervention, and instead, let the United Nations and Yemen opposition group come to some sort of compromise, which will satisfy both.

The idea of isolationism is simple in theory, however, is it applicable? Unfortunately, the answer to this question is unknown. What is known, is the fact that Yemen is on the edge of becoming a failed state, and nothing that has been done so far neither by United Nations, nor by any other participating states, has helped improved the ongoing conflict.