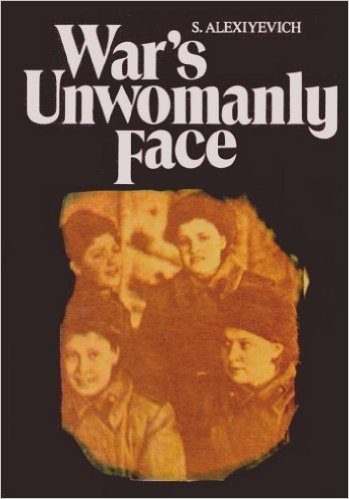 All that we know about Woman is best described by the word “compassion”. There are other words, too-sister, wife, friend and, the noblest of all, mother. But isn’t compassion a part of all these concepts, their very substance, their purpose and their ultimate meaning? A woman is the giver of life, she safeguards life, so “Woman” and “life” are synonyms.

But during the most terrible war of the 20th century a woman had to become a soldier. She not only rescued and bandaged the wounded; she also fired a sniper’s rifle, dropped bombs, blew up bridges, went reconnoitering, and captured identification prisoners. A woman killed. She killed the enemy who, with unprecedented cruelty, was attacking her land, her home, her children. One of the heroines of the book, trying to convey all the horror and the cruel necessity of what had happened, says: “Woman was never destined to kill.” Another woman wrote the following on the wall of the Reichstag: “I, Sofia Kuntsevich, came to Berlin to kill war.” Woman thus made tremendous sacrifices to bring about Victory and at the same time they accomplished an immortal feat whose magnitude we can grasp only gradually in time of peace.

In one of his letters, which he wrote in May-June 1945 and which is now kept in the Slavic Anti-Fascist Committee fund at the Central State Archives of the October Revolution, Nikolai Roerich said: “The Oxford Dictionary has licensed several Russian words now recognised throughout the world; for instance, the words ‘ukaz’ and ‘Soviet’. One more word–the untranslatable meaningful Russian word ‘podvig’–should be added. Strange as it may seem, no European language has a word with at least approximately the same meaning…” Should the Russian word “podvig” ever find its way into the world’s languages, part of the credit for this should go to Soviet women who had to shoulder the burden of supporting the rear, saving the children and defending their homeland together with men”.

Everything I have learned about politics was pure self-education. It took years for me to find my position in all those terms, ideologies, groups … All of them were limited too much for me and I could not identify with any of them totally. Then I realized: we live in a men world and ideologies were not even meant for woman to fit in them. Women, by their nature are free human beings, and that’s why society tried to tame us for decades. They still do – they try to limit our opportunities, our desires, our powers. For a long time I was exploring women issue in war – my first ‘big project’ was participation in researching about Balkan women in WWII, partisan women who never became ‘national heroes’, who died for freedom and we don’t know their names. So far, I found the book written by Svetlana Aleksievich “The Unwomanly Face of War“.

The most known book of Belarusian writer Svetlana Aleksievich “ War’s Unwomanly Face ” was published in the Palmira publishing house (Moscow). The book appeared in its full version for the first time – Aleksievich added some new episodes, and also restored many cuts made in the middle of 80th by editors and censors of her book.

Svetlana Aleksievich working on a new book about love ( “The Wonderful Deer Of Eternal Hunt”), had to suspend the work as the theme of war became actual again.

This book is written in 1985 and it became reportage from the front. Normally, the books about war speak of heroic acts men made. Meanwhile, in the Soviet army, over million women fought. They were pilots, snipers, machine gunners and anti-aircraft gunners. After the war, many of them had to hide the fact that they were soldiers, because it was thought that women in the army had sex with men soldiers.

The man talked about their acts, about movements and military leaders, and women talked about something totally else: about how scary is to kill someone for the first time, to go after the fight on the field where the dead lie … After this war, women had to fight another war. They had to hide their military books, certificates and scars – it was necessary to learn how to smile again, walk in high heels and get married. And men forgot their comrades, they betrayed them, they stole their victory.

For this book, she interviewed more than 800 woman. After the publication of the book, she started receiving letters in which not only women, but also men, veterans have described events during the war, but many of them are not published (due censorship).

This book is history teacher for all women. I remember, we used to rewrite three times history lessons in school. Today we learn from three different books. What will come after these women? Ask them while they are alive. Do not invent after they die. Ask!

Through whole life we learn history, but the only truth about historical events is that we don’t know anything until the end. It is the whole truth.