A Good Night out in Barcelona

It is not that hard to create a great night out in this big Spanish city.

For the first alternative, some somewhat cultural-touristy choices wouldn’t hurt anyone, especially if you are traveling to a place that you have not been before. The alternatives include some of the cultural performances that are scheduled at night, either if it is watching a flamenco performance at one of the small bars in the city or find some local musical performances or even the grand concert halls if you may!

There are numerous bars and clubs scattered throughout the city, and it is just up to you on which bar or club’s music suit your preference or not, and do not forget to browse the prices of the drink they serve, otherwise those budgets will definitely be forgotten once you’re in.

One that screams with angst and indie rock is Sala Apolo, a quite sufficient venue that sometimes houses concerts for today’s up and coming bands. The great crowd accompanied with some nowadays alternative pop rock sounds will surely bring out the youth in you, but you do need to prepare as the drinks there are quite expensive and maybe browse first for some opportunities on the guest list before coming. Some others are also located in the old town such as Sidecar Factory Club. 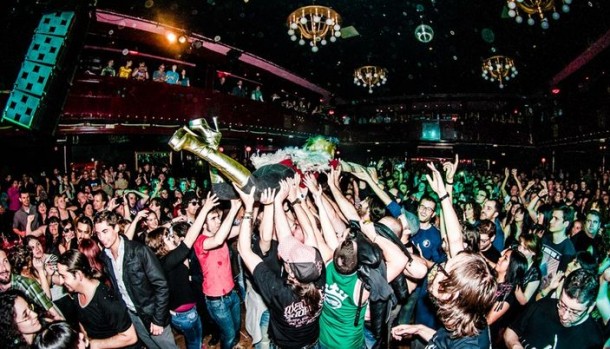 The next choice would be to hit Barceloneta, filled with Barcelona’s beach clubs scattered along the coastline.You would just need to choose one of them, and don’t forget to dress up just a bit, as the nightlife in Barcelona came out quite differently than some countries such as the Netherlands, where you do not need to dress up that much for a night out.

If you would want to escape the clubs, just go out for a bit for some fresh air and hear the waves mingle with the sound of loud music that leaks through the clubs.

..and when you’ve had enough of the hustle and bustle of the loudness, and still have time and energy for more, gather your last bits of energy and try to find of the secret bars located in the city.

Some bars and clubs hold some themed nights in some days of weeks, so some good browsing first would do the trick, as well as some super handy navigation applications would definitely help guide you through the city, or simply meet some friendly Barcelonians on the way, and they may even show you some great places too!

*Well, still, always be careful for the tourist traps offers you may encounter on the main tourist streets such as La Rambla*