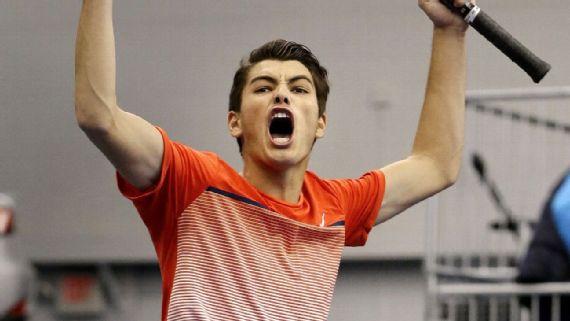 Taylor Fritz – The First Wild Card of the Cincinnati Masters 1000

Novak Djokovic won’t be at Cincinnati after wrist injury, instead Taylor Fritz will do. While a champion is getting out of the way, a great talent tries to win over American fellows. Taylor Fritz has never hidden the desire to be the number one. Growing up with a father who is a tennis coach and his mother Kathy May, former top-10 Wta, this is a surrender declaration.

The 18-years old, 193 centimeters high and 84 kilos weight, had thought a second way: a career in Nfl. Because, in all teen, there wasn’t only the myth Sampras, who brought him a cake for eighteen years, but also San Diego Chargers games.

According to supporters, still smitten of Pistol Pete and also Las Vegas Kid Agassi, he is the chosen one, just like Lebron James in Nba. In 2015, Fritz has won juniors Us Open and seems to be good for every surface. In the last Indian Wells competition, he trained with Djoko, to steal tricks.

At Memphis, Kei Nishikori has crushed with a double 64 the youngest finalist of Atp tournament. Against Federer on Stuttgart grass, he broke a set. Fritz get married to Raquel Pedraza, an Itf player. For this reason, he is used to breath tennis. Everywhere, he finds racquets and balls.

This boy would like to win a point with serve, stunning forehand and Us Open of giants in near future. At the moment, tennis is running, cool head and physical resilience. All the talents, including Zverev, Thiem, and Kyrgios need to be necessary for their activity. Federer, Djokovic and Murray are not immortal.