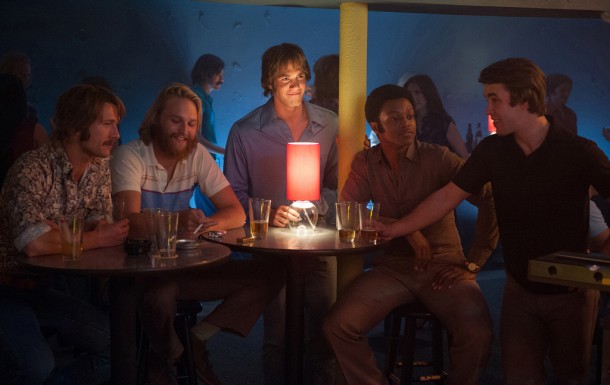 Everybody Wants Some! Review

Richard Linklater’s quality as a filmmaker is borne out of an inherent sense of innocence. For those who have seen his seminal works, such as Boyhood (2014) & Before Sunrise (1995) this may be a paradoxical notion. In Boyhood, the very nature of Mason’s (Ellar Coltrane) journey from childhood, through the wilderness of adolescence to the budding maturity of a young man felt like the gradual loss of innocence. Simultaneously, many a critic & viewer alike perceived Mason’s growth as a preservation of the ‘innocence’ which we all value in the young, a deep-rooted idea that youth is a more idyllic and therefore better period of life. In consideration of these twin concepts, Linklater allowed us, with Boyhood, to ruminate on the transience of existence and in true William Blake fashion, a fleeting sense of the ‘moment’. In his latest work, Everybody Wants Some! named after the eponymous Van Halen song, Linklater picks up directly after where Boyhood ended; a young man on the cusp of entering college. The opening scenes of Blake Jenner’s Jake, a pitcher for his new university’s baseball team, arrival at his new home are set to the evocative strains of My Sharona and like that song’s deceptively catchy lyrics, this film is a shot straight to nervous system. Jake is immediately hazed by McReynolds (Tyler Hoechlin), whom as a his name suggests sports an unironic mustache and a willful disdain for pitchers and their ilk. However, rather than tread the well worn path of victim-turned-group hero, Linklater opts for the organic approach. Whilst welcomed with annoyance by some, Jake is immediately accepted into that male-centric and all encompassing rite of passage, drinking. Their first foray to the bar is a welcome curtain raiser to other members of the group, whom are each given their chance and are allowed to move beyond the two dimensional background roles which a lesser filmmaker might have granted them. The long weekend, with its omniscient onscreen countdown to the beginning of the academic year passes in a classic Linklater fug of warm skies, cold beers and short skirts. It never feels rushed nor too slow, it ambles and strolls, much like its charismatic ensemble through the sunny streets of its college town. Importantly, some have raised the issue that the women portrayed are solely there for the pleasure of their male counterparts. Yet, whilst an important criticism it is necessary to realize that the agency of women in this picture, in an American Pie style film would be reduced to misogynistic tropes.

However, Linklater’s picture dwells on its male characters, as simply put, the film is about them. It is not about the perpetuation of stereotypes. In reality, it is about this group of young virile men in their prime, embracing the moment in a period of their youth where their self-created invincibility is their armor. Winningly, however, the chinks in this armor are shown with gleeful abandon. Athletes and preeners these men may be but perverted misogynists they are not. They realize how short life at University is and how the Discos, Country Bar’s & Drama parties are a place to discover their faults and nuances in an environment that does not judge. It also helps that the whole cast is deceptively charismatic. Glenn Powell as the irrepressible Finnegan, J Quinton Johnson’s Dale & Wyatt Russell’s Willoughby deserve special plaudits and give knockout performances that never feel forced. The dialogue flows and it is to Linklater’s credit that his script is so natural and feels exactly what these characters are feeling and thinking. Linklater’s experience in this field stems from his own time as a College Baseball player and the virulent competitiveness that infuses every scene where the full team is together. They know they’re at the peak of their powers but they realize it may never be enough to turn pro. Furthermore, whilst the story-line, like any Linklater film, has no real sense of tangible direction, the ambling pace set by Shane F. Kelly ensures we are never bored.

The by the book meet-cute romance we might see in any American nostalgia flick is simply too chemically balanced between Jenner & Zoey Deutch’s Beverly to fall into schtick. The beauty of their relationship is this acknowledgement that it is finite and bears an echo of the sentiments of Ethan Hawke’s Jesse in the Before Trilogy. Their youth feels eternal and fleeting and their sparking conversation may not stand the test of time but for the 1hr 57 minute running time it will last forever. To truly do justice to this arresting rumination on the passage of time, building upon Boyhood’s impressive foundations would require a doctoral thesis in of itself. Nonetheless, this film left me wishing for just a few more minutes in the arresting company of this talented cast, a few more hours to lazily shoot beer pong in the backyard or dance to Brick House. Ultimately, Linklater’s film is too enjoyable and achingly fun not to see, to quote Russell’s Willoughby, “We came for a good time, not for a long time.” I wish it had been longer and so will you.