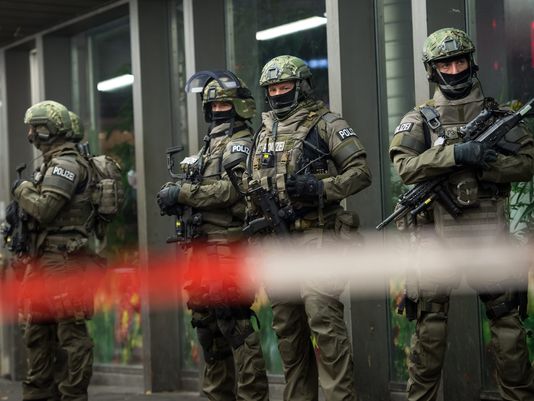 The following op-ed was co-authored with Benoît Masset.

Summer holidays are coming to an end in Europe. This summer period has been one of the bloodiest in many European countries, particularly for Germany, in that last couple of years.

The most prosperous European state has during the course of July endured three terrorist attacks within its national borders, each terrorist operative carrying out his attack by different means: a suicide bombing in Ansbach by a Syrian who pledged allegiance to the Islamic State, an axe and knife attack against train passengers in Würzburg by a 17-year-old Afghan refugee, and a shooting by a teenager with German-Iranian citizenship at a shopping mall in Munich that led to nine young people being killed.

Although the terrorists had different backgrounds and committed their attacks with various modus operandi, a single answer emerged from the German authorities: they were all mentally ill. Linking mental illness and terrorism by public authorities in Europe or in other parts of the world is not a novel practice. However, shrinking the space between mental illness and terrorist acts is a dangerous one and forms the basis of individual and societal injury. Linking these two variables provides security forces with the means to play fast and loose with responsibilities and expectations to provide a degree of safety for the people of a given country.

Mental illness usually provokes a loss of contact with reality, an impairment of rational thought, actions, and behavior, though the recent European cases demonstrate that Ali Sonboly and the other terrorists all consciously executed their attacks and that they were premeditated. Excusing terrorist act using the mental illness card, we risk entrenching the stigmatization of those afflicted with mental challenges but we also run the risk of creating a stereotype of a radicalized fundamentalist burned by mental difficulties. However, such a stereotype might be far from reality, therefore authorities in Germany as well as in other European states might miss the more complex issues afflicting those troubled fanatics.

Using the presumed mental illnesses of terrorists as a means of dissimulating the inefficiency and the lack of cooperation between European intelligence services, as indeed the recent cases from Brussels airport to the Promenade des Anglais in Nice proved, have become a convenient and seemingly cost-effective approach by European representatives. Similar treatment of terrorist cases has taken place in the US. The Orlando shooting has been called a case of “Islamic terrorism, homophobia, mental illness, or guns.” The San Bernardino shootings perpetrated by Syed Farook and Tashfeen Malik, resulting in 14 deaths, are wrapped in questions marks regarding the shooters’ motivations. Mental illness was again then uttered by law enforcement officers.

Pennsylvania Republican Tim Murphy “has made a point of exploiting each mass shooting to call for restricting the rights of people with disabilities, blaming the mentally ill for this violence despite a clear research literature debunking such links. This trend has continued even after shootings, like last week’s attack on Planned Parenthood in Colorado Springs or Elliot Rodgers’s 2014 shooting spree at the University of California Santa Barbara, that had a clear political motive.”

Using this type of pretext in real and violent events repeatedly helps to create a powerful precedent. Germany could be leading the way in this area, demonstrating to other European states that the root causes of terrorism and political violence can be shifted to the bemusement of something that for decades societies have merely swept under the rug. Moreover, the bloody events of this past summer illustrate quite strikingly that collaboration between European intelligence services is still an à la carte process. After the course of what many witnessed and bore the traumatic brunt of Bastille day Germany agreed to create common files of potential European terrorists, but once again, it happened too late to prevent the attacks on German territory.

As we are told, jihadist terrorism is an inexplicable and evil phenomenon that we cannot understand. This is the same misleading logic used to describe previous heinous events of the 20th century like mass-genocide perpetrated by entire societies under dictatorial leaders. When something is “evil” it is inexplicable, leaving anyone who can possibly understand it either disturbed or possibly evil too. In the absence of the explanation, we have begun to refer to perpetrators of atrocities as individuals who are disturbed mentally. In doing so, we begin to fail ourselves as well as our own efforts to combat these violent threats.

Research suggests that the stressful factors prevalent in our daily lives, including intensive psychological pressures in many walks of life, including perceptions of inferiority, intensive degrees of competition, and constant failings to create a sense of self-understanding, awareness, and belonging, are strong push factors. What can lead to extreme levels of depression, anxiety, and select kinds of dissociative disorders. Terrorism and violence acts are just one of many channel through which an individual can express the company of dissociation.

Liah Greenfield, author of Mind, Modernity, Madness: The Impact of Culture on Human Experience, argues that individuals suffering from such malaise tend to “clutch at the available ideologies (such as Islam, widely believed in our society, as well as in Britain, to motivate rage against the West), which then justify their emotions in their own eyes and allow them to express these emotions. Turning to terrorism so quickly can easily “obscures the mental illness problem,” while the opposite occurs when too many fingers point to mental illness, not merely as a problem, but as a problem that occupies the seat of responsibility for those who have made a conscious and rational calculus regarding an action or certain set of actions, practices, and behavior.

According to Bill Whitehouse, author of Unveiling Terrorism: Fundamentalism, and Spiritual Abuse, “[i]n the case of terrorism, however, one of the primary driving forces being expressed through the dysfunctional, maladaptive coping strategies of a terrorist dissociative disorder is to do violence (emotional psychological, social, physical, economic, and/or spiritual) to others. The terrorist believes that the cause of his or her felt sense of dissociation has a remedy which revolves around an external locus of control, whereas most dissociative disorders involve remedies which revolve around an internal adjustment (involving memory, awareness, perception, and/or identity) to the felt presence of dissociation.”

The use of mental illness as the logical explanatory concept justifying the atrocities committed by terrorists has become a practice steeped in moral and political error that requires greater scrutiny in the following months particularly if further terrorist attacks occur. Though they were neither psychologically weak nor ill; rather, they were still responsible for their actions, which they carried out in cold blood and with calculable fashion.