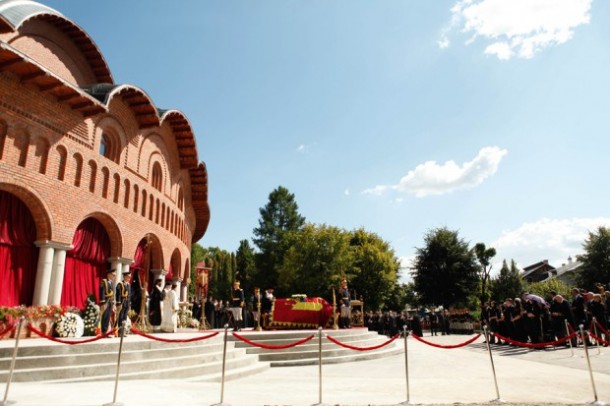 A royal funeral took place in the Romanian town of Curtea de Arges on Saturday for Queen Anne of Romania. She died in a hospital in Switzerland on the 1th August, aged 92.  French-born Princess Anne of Bourbon-Parma became the Queen Anne of Romania after she married former King Michael I of Romania in 1948. The then 26-year-old king was forced to abdicate after the Communists grabbed power on December 1947. They have lived together in exile for decades, choosing Switzerland as their last residence abroad. Queen Anne was a Catholic believer but they were married in an Orthodox church in Athens following King Michael’s religion although she had not been granted the required papal dispensation. Twenty years after their first wedding, Anne was able to marry her husband in a simple private ceremony by Catholic rites in Monaco. She first visited Romania in 1992 when she was 68 and has never spoken the language. Queen Anne was never crowned and yet gets full state honours. A day of mourning has been declared in both Romania and Moldova, and flags flew at half-mast. Many foreign and national officials have expressed their condolences to the family along with thousands of Romanians paying their respect at the Royal Palace in Bucharest.

While people broke into a round of applause, soldiers placed her royal flag-draped coffin, which left the Palace after the Orthodox and Catholic priests conducted a short service. The cortege arrived in Curtea de Arges three hours later. The Orthodox service lasted nearly half an hour after which Queen Anne was buried inside the new cathedral, in a private ceremony.

Four of the couple’s five daughters were present for the funeral. Former Princess Irina, who was stripped of her royal title in 2013 after she was arrested for running an illegal cockfighting in the U.S., did not take part. King Michael and Queen Anne’s grandson, Ex-Prince Nicholas stripped of his title in 2015 for lacking”modest moral principles”, attended the ceremony together with the family. King Michael, 94, who has an unstable health condition, remained in Switzerland.

Queen Anne was born in Paris and attended the Parsons School of Design in New York from 1940 to 1943.  The same year, she voluntarily joined the French army as an ambulance driver. For her service she was awarded the French Croix de Guerre. Anne met her future husband in November 1947 in London while King Michael was visiting the metropolis for the wedding of the then Princess Elizabeth and Philip Mountbatten. Queen Anne had a high regard for King Michael’s mother Queen Helen and Elisabeta Rizea who was a Romanian anti-communist partisan in the Fagaras Mountains.

The Curtea de Arges Monastery which is the necropolis of the Romanian royalties was built more than 500 years ago by the ruler of Wallachia Duke Neagoe Basarab. Queen Anne was buried in one of the newest twelve tombs which have been recently finished. The Episcopal and Royal Cathedral covers 800 square metres and Archangels Michael and Gabriel are its patron saints. The construction was supported by the Romanian Government with nearly half a million Euro, by donations and with royal family’s founding.