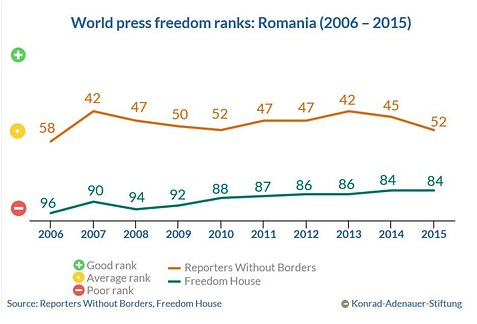 An Overlook at Media Freedom in Romania

According to Balkamedia Romania scores first when it comes to the freedom of the press among Southern Eastern European countries. The Romanian media environment is unbalanced for several reasons: a huge rhetoric (even physical aggression in some cases, here is a perfect example) against journalists, highly politicised media outlets, corrupted mechanism of financing, tricky interests in publishing from third parties and secret agents from information services who managed to infiltrate in the editorial offices.

Romania fell 7 ranks in the latest report from RWB, from 45 to 52. What is even more contrasting is that Bulgaria, one of the 5ht neighbouring countries was on 106 and the countries joined EU in the same year (2007).

Although freedom of expression and the press are well-anchored in both the constitution and specific legal provisions, Ioana Avadani of the Centre for Independent Journalism notes a gap between the legal norms and their actual implementation, as cited in the IREX Media Sustainability Report 2014. What is more, “societal norms are even weaker.” What the media expert means is that infringements of media freedom seldom cause public outcries, highlighting that media freedom is no one-way road.

2014 was a year of exposure of the dubious links between media, politics and business. In August, Dan Voiculescu, a senator and the founder of Intact Media Group (which is currently owned by his daughters) got sentenced to 10 years in prison for money laundering. Another similar case is the one of Dan Adamescu, owner of the România Liberă (Free Romania) newspaper was under investigation (also placed under house arrest) in an insolvency and insurance case, and in 2015 he was convicted to 4 years and 4 months in prison for bribery. And the list could go on for pages.

Aside financial uncertainty, political and industrial sympathy also influence the freedom of speech. As expected, political conflicts are played well publicly in the media, with the TVR (national television) usually siding with the government while the private media supports its own agenda (investors, friends etc.). The National Audiovisual Council has also lost its credibility and neutralism as it is presented in IREX 2015.

Even if Romania ranks relatively ok from a worldwide perspective, when zooming in on Europe the situation becomes extremely gray. The reasons to worry are many and data is not encouraging either, so there is nothing else to do but support free speech and the independence of media through better regulations.