Facebook can be imagined as a huge square where virtual friends meet, talk, show their pictures to other virtual friends, share with them news, thoughts of many kinds, sometimes ideas and much funny jokes. This is in fact Facebook’s social landscape, in other words it is a virtual place where to meet and communicate with others.

Let’s keep considering Facebook through the metaphor of the huge square accessible to everyone at any time, but let’s try to imagine it as a real square as big as Plaza Mayor in Madrid, Praça do Império in Lisbon or Wenceslas Square in Prague, and imagine that all our Facebook friends are meeting there with us.

Here comes John, the Law student you met in London during your Erasmus there. He is showing (therefore posting it on his news feed in the virtual world of the social network) a newspaper article which claims that Jeremy Corbyn is not at all an appropriate candidate to lead the Labour Party. Actually you like Corbyn and you think exactly the opposite, Corbyn is a good candidate for the Labours. Suddenly, John comes up to you and asks you what you think about the article he is showing, involving you in a conversation with other virtual friends of his (he just tagged me in a comment). At this point you simply express your idea: you like Corbyn for x and y reasons and state that, on the contrary, he could be a good leader for a and b reasons. In this situation you felt free to tell John and his friends your personal opinion because you know him and you know that he respects other people’s ideas even if they are in contrast with his own point of view.

However, communication in real life and on social media is not always so easy. As a matter of fact, now a politician is approaching our social square and with him a fundamental problem. This politician – it is irrelevant whether he is a leftist or rightist – is proclaiming some new idea to change and improve the country. You are interested in what he is saying and approach him and the crowd around him. At the end of the politician’s proclaim you tell the man next to you that you absolutely do not agree with what the politician has just said, so half of the crowd turns towards you and starts beating you almost to death; luckily someone calls the ambulance.

In the first example, freedom of speech and opinion is respected, in the latter it isn’t. It is clear that it is an extreme, unreal example, but it is an episode which happens everyday on social media where, instead of beatings there are offensive words. 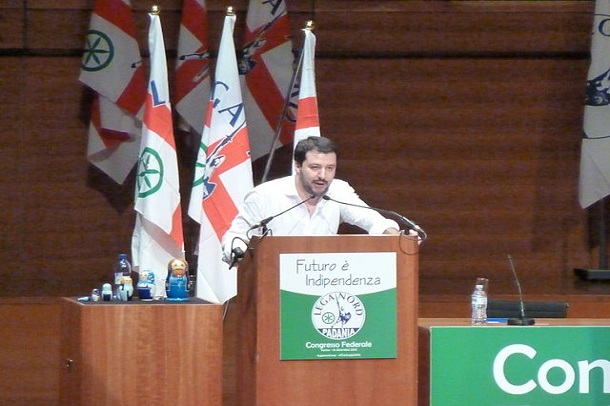 It seems that on his Facebook page, and in many other pages managed by other Lega Nord spokesmen, the rage of some of Salvini’s supporters becomes irrepressible and uncontrollable any time someone expresses his or her opinion against the leader. They start beating you to death: the most polite tell you you are a communist or an idiot who, supporting Prime Minister Renzi, wants most of Italians dead, others wish you would die, or be burgled by a band of immigrants or, if you are a woman, would be raped by the same band of immigrants.

This is disgusting and unacceptable and it is clearly not a defence of democracy or freedom of speech, as many rude supporters of Salvini claim. As a response to this behaviours and attacks many Facebook users who were insulted reported those who insulted them, but the latter easily created a new profile and went on offending anyone who dared to disagree with Salvini. Moreover, it is very fast and easy to report to Facebook such subjects, the problem is that they are too many and it would be impossible to report them all.

In conclusion, Facebook should protect more the sound freedom of speech and opinion of its users banning those who don’t respect the simple principle that a single way of thinking cannot exist in a democratic country and heavy offences, such as those reported here, should be forbidden. Nevertheless, Facebook is only responsible in part for this situation: politicians of any side should moderate their language and adjust it to a more polite and discreet accent. Renzi and his jinxes, Salvini and his bulldozers, Grillo and his “f*** you all” should moderate their speeches because they are public figures and, willy-nilly, they become examples for many of their supporters.