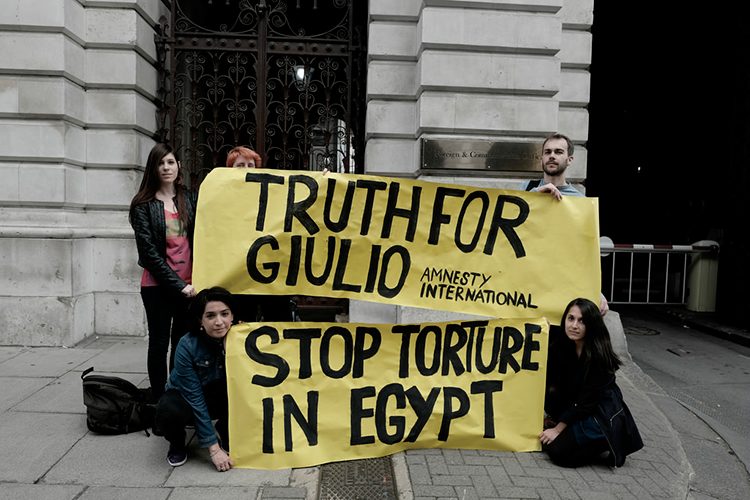 Giulio Regeni was an Italian reporter and a student at the University of Cambridge. After his first visit to Cairo in 2013, he came back to Egypt in 2016 to study the economic and political affairs of President Al Sisi. The country was facing a period of bloody riots called the “Arab Spring” that started with the fall of former President Mubarak and was marked by murders and illegal detentions. Regeni hoped for a democratic resolution, and for this reason, supported some independent labor unions, especially peddlers, and spent time interviewing them. The most important target of the Arab Spring was the end of the big surveillance system in Egypt that condemned both lawyers and reporters.

According to New York Times Magazine reporter Declan Walsh, on 25 January 2016, Regeni disappeared; he didn’t reply to friends’ calls and nine days later, the police found his dead body in a street near the capital. On February 8, an autopsy showed that were “cigarette burns on his skin, some deep cuts on his back, blood on his hair, two teeth missing and the others broken, strokes under the bottom of his feet”. Someone had tortured him with a blade and “the guy died when his neck was broken,” but the local government responded that ordinary criminals were to blame, and that there was no evidence.

The Italian ambassador of Cairo, Maurizio Massari, tried to discover the truth about Regeni’s death, talking with the local Interior Ministry, Abdel Ghaffar, but their discussions were useless. Seven Italian investigators came to Cairo to help question their Egyptian colleagues, but they couldn’t talk to reliable witnesses and at same time, film footage from the security cameras near Regeni’s flat had been deleted. Therefore, Ambassador Massari thought the Italian embassy in Cairo was no longer a safe place, and stopped using phone and email to communicate.

On September 2016, the National Security Agency in Egypt accused the young reporter of espionage, admitting to have followed and intercepted him. Recently, the Egyptian lawyer of Regeni’s family, Ibrahim Metwally Hegazy, was arrested while he was going on a flight to Geneva. He is still accused by the Egyptian government to have conspired against Al Sisi’s Presidency. The Italian Prime Minister Paolo Gentiloni said that, to resolve the case of Regeni is the duty of the state. After all, Italy and Egypt had built commercial and political relationships based on selling gas and weapons to beat Isis. Did a source really betray Giulio Regeni? Or was he killed by someone who feared what he was going to report?

The New York Times’ article is almost two months old. Let’s not forget about Regeni. His gravestone is just a plain marble slag, as Walsh reports: “Because the investigation is still open, the parish priest explained, officials might yet need to exhume his remains.”